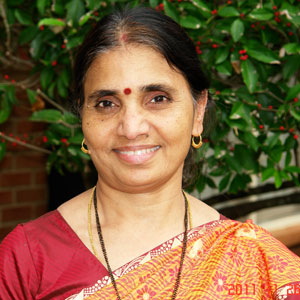 Spearheaded by Dr. Seshu Sarma of the Hindu Temple of Atlanta, an initiative titled Upahar (“Gift”) is bringing together several Indian religious and cultural organizations in partnering with Habitat for Humanity to build houses for low-income families.

The thought that one person is related to me and another is not is that of the narrow-minded. For the broadminded, however, the whole world is one family.
—Hitopadesha: 1.3.71

Vasudhaiva kutumbakham. The whole world is one family. Indians have always believed in this sliver of wisdom from the ancient scriptures. But how many of us genuinely act upon this philosophy? Now more than ever, when the world is divided by race, gender, class, and color, it’s time to embrace this universal truth and translate it into action. Happily, the green shoots of an initiative that embodies this principle of oneness are visible right here in Atlanta.

Dr. Seshu Sarma, who leads the Community Services Committee at Hindu Temple of Atlanta (HTA) is one of those inspired individuals who think beyond the obvious. While HTA has undertaken a slew of charitable projects with Indian beneficiaries, Dr. Sarma felt it was time for diverse Indian-American institutions to come together and practise philanthropy in local mainstream communities—something that would build strong, lasting ties among people of different faiths. This thought led to the formation of Indian Community Service Initiative of Atlanta (ICIA), an umbrella organization that would pool the resources and strengths of various Indian faith-based and cultural associations.

Kusuma Kotte, President of the Hindu Temple of Atlanta further elaborates on why this is important for them: “We believe building a community doesn't only happen within the four walls of our Temple, it goes well beyond. We wholeheartedly believe the greatest way to demonstrate devotion is through service to those who need it the most.” These sentiments were echoed by Yogesh Joshi of Sanatan Mandir, Ram Balaji of Hanuman Mandir, Sreeram Pallareddy of Shirdi Sai temple, and Venkat Meesala of Telugu Association of Metro Atlanta, who are all now part of ICIA.

This consensus helped the Hindu Temple identify its first beneficiary—Habitat for Humanity, a mainstream charity that identifies prospective homebuyers from low-income groups and helps them realize their dream of home ownership by sponsoring no-interest finance and voluntary assistance with building their home. ICIA’s first initiative, titled Upahar (“Gift”), was thus launched.

In a brief Q&A, Dr. Seshu Sarma offers more thoughts about Upahar and the inspiration behind it:
How did Upahar come about? What sparked the idea?
I took up the community service committee at the Hindu Temple in January 2017. While thinking about what we need to do, I felt that our community should do something substantial locally, literally in our neighborhoods. I thought of bringing as many organizations together as possible and do something as a community, not as an individual organization. I reached out to what are now our partner organizations, and they were all very supportive and saw the value in doing a community project locally.

Why do you think it is important for Indian-Americans to get involved in Upahar?
When I looked into Habitat for Humanity, I came to know that there is wide participation by several non-profit organizations and businesses which fund and support the house builds. Several religious organizations fund and support them as well. But, there is not much enthusiastic participation by Indian organizations. Haley Hart [from Habitat for Humanity] told me that she has been trying for many years to get the Indian faith-based organizations to participate and volunteer in HFH house builds. I see that when it comes to philanthropic projects, there is not much active participation for local projects by Indian individuals or organizations, both faith-based or cultural. I wish to change it, even if slowly. The purpose of Upahar is to do the same.

The beneficiary of the UPAHAR project 2017 is a single mother with a young daughter.
The location of the house build is 380 St.John’s Avenue, Atlanta, GA 30315

The house build will take place on 8 consecutive Saturdays, starting July 8th through August 26th.
Anyone above 16 years of age can volunteer, no specific skills are required. The work begins at 7.30 am (ON TIME) on each Saturday and end at 3.30 pm.
If any one wants to volunteer, please register using this google form http://www.tinyurl.com/upahar2017
Join us in building the house that will soon be someone’s home.
Rama Balachandran is coordinating the volunteer efforts for UPAHAR project.
Please sign up soon.
With best wishes, Seshu