People: From Here, There and Everywhere 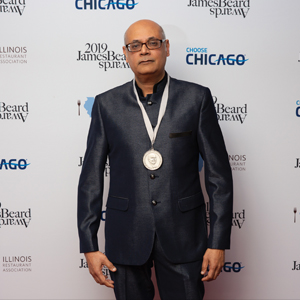 James Beard Award winner, VISHWESH BHATT, is a fine example of the magic that happens when a person, especially a chef, exudes cosmopolitan vibes without ever disowning native pride.

On the occasion of his new book, I Am From Here: Stories and Recipes from A Southern Chef, we chat with this culinary star who has carved a niche for himself by deftly infusing the food sensibilities of his Gujarati background into the cuisine of the American South.

Sometimes, world events can light a fire that compels an award-winning busy chef to make his dinner table larger than his restaurant. Something similar inspired Chef Vishwesh Bhatt to write his debut cookbook, I Am From Here: Stories and Recipes from a Southern Chef.

Bhatt believes that the current climate necessitates that immigrants stand up and tell their stories. He adds, “If we are not telling our stories, it is difficult to complain about being overlooked or acknowledged—especially if we are not putting our stories out there. It is not easy to do it—you may have to fight for it, but it is important to put yourself out there and be heard.” 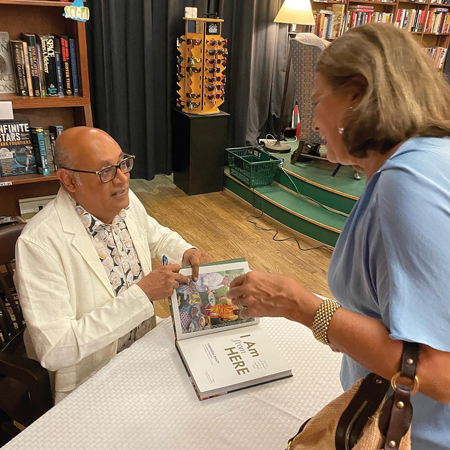 His cookbook unapologetically embraces the duality of his Southern and Indian identities. “At his restaurant, Snackbar, dal and chapatis meet collard greens and potato chips,” reads the tagline of a Wall Street Journal article on him.

But Bhatt’s sensibilities transcend limiting definitions as he embraces a more global outlook for his culinary creations. In this book, we see where his true inspiration lies. It is replete with beautiful memories of meals with his friends such as Ezme, a Turkish Tomato Salad, that he first ate at a friend’s house; an Afghan-style Spinach with Dill & Cilantro from an Afghani friend’s home; alongside a Punjabi-style Catfish inspired by street vendors in Amritsar and his conversations with the celebrated chef Maneet Chauhan of Nashville, Tennessee.

[Right] A widely celebrated chef, Bhatt has quite a fan following. (Photo: Facebook.com/SnackbarOxford)​

An avid traveler, Bhatt’s Instagram (@kissmybhatt) is brimming with snapshots that rouse his interest, celebrating local flavors and people at every turn. Bhatt hopes that in the future, he can explore Portugal, North Africa, Morocco, Tunisia, Mexico City, Brazil, the Caribbean, and some other regions for inspiration for his menu.

I Am From Here offers us an insightful look into the mind and kitchen of a generous-hearted food lover who happens to be an award-winning chef. 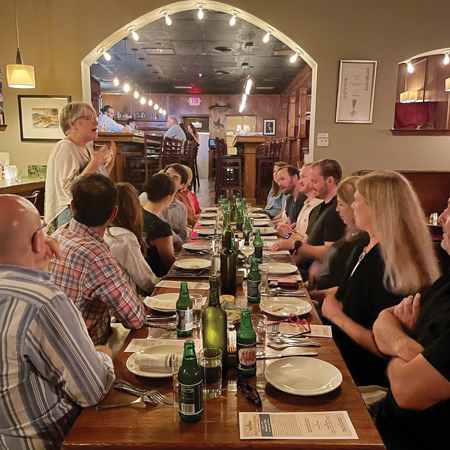 Bhatt’s passion and innovation have helped him make his restaurant, Snackbar, a coveted upscale destination in Oxford, Mississippi. (Photo: Facebook.com/SnackbarOxford)​

Bhatt’s culinary journey started early in his life. Growing up in Gujarat, India, Bhatt was happiest in the kitchen. Always surrounded by family members who showed him his way around spices, ingredients, and techniques, his childhood memories are replete with tasty reminders of Gujarati food.

But when a Delhi-based family friend cooked Chhole Bhature for Bhatt’s Gujarati palette, he was immediately enamored with the flavors and textures of this popular Punjabi plate. When a trip to Mumbai led him to Khyber Restaurant, he fell in love with paper-thin Rumali Roti, as delicate as a handkerchief. He became intrigued by regional Indian cuisines and that kindled his lifelong pursuit of flavor.

At 17, Bhatt migrated to Texas with his parents in 1985. He later enrolled at the University of Mississippi in a Master’s program. He would occasionally work at a local cafe. His family eventually settled in Oxford, Mississippi. But his love of food encouraged him to attend culinary school in Miami.

After moving back to Oxford in 2002, he began working with City Grocery Restaurant Group (CGRG). In the next few years, he teamed up with CGRG and opened Snackbar which has become not only a local landmark but has attracted several nominations for the James Beard Award. Ten years after he opened, Bhatt bagged the coveted James Beard Award for “Best Chef: South,” a well-deserved recognition for his passion for exploring flavors. 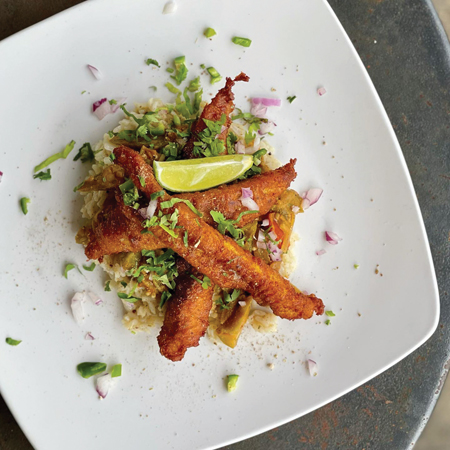 After more than two decades of professional cooking and a lifetime of learning, he feels his flavors now come easily. For him, cooking is a relaxing exercise where intuition meets whatever is readily available. Throughout his cookbook, a reader sees how Bhatt’s recipes are inspired by his childhood, his travels, and the kitchens of his family and friends.

He weaves in plenty of anecdotes, especially around learning to eat meat after he was raised as a vegetarian. But he also observes, “We get comfortable with three-four blends, we throw around Garam Masala a lot, [but] there is more to it.” To that end, he has included several regional Indian dishes, such as Parsi-style Sweet, Sour, and Spicy Shrimp; Ahmedabad street-style Grilled Chicken; and Braised Pork Shanks, a Kerela-based dish from Chef Asha Gomez’s repertoire. It is made with coconut milk and Malabar Spice (a product from Spicewalla, a line that he created in collaboration with Meherwan Irani of Chai Pani). 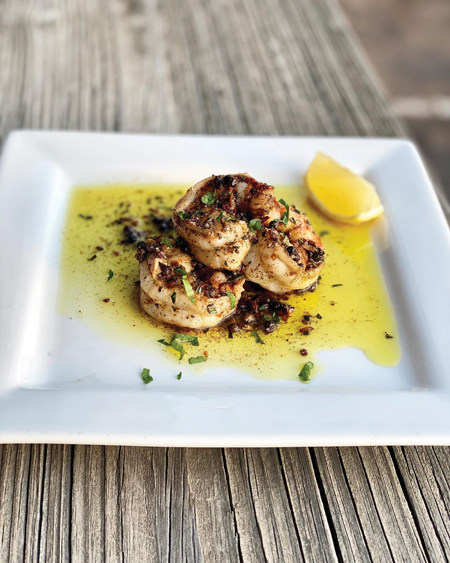 A quiet family dinner at home with his wife is often a one-pot dish, a stew, or a braise and a loaf of crusty bread with a bottle of wine. His go-to comfort food is Khitchidi, the second recipe in a large cookbook, or a Sunday Daal that he learned from his father. It tells readers his roots are firmly in India. While he does love his desi spices, Bhatt is just as comfortable with any version of Khitchidi like risotto or something else. With his appreciation of global flavors, he is at ease with parallels, accepting them all: both people as well as the flavors they claim as their own.

Bhatt believes that food is meant to be shared. At home, he often cooks with his wife, but neighbors and friends join in frequently. He says they seldom plan everything down to the last detail. Instead, they engage in freeform cooking, where everyone pitches in and builds a meal. A huge proponent of seasonal produce, he insists on only purchasing seasonal domestic produce, and only purchases meat as needed. Bhatt’s nuanced food memories guide his hand in the kitchen, and it shows in every engaging headnote that ties old food memories to what is available in one’s favorite marketplace.

In the restaurant, Bhatt is inspired by the work of folks like the late Floyd Cardoz, Norman Van Aken, Ben Barker, Frank Staple, John Currents, Ashley Christenson, and others who have shaped his work ethic.

With its soul-filled perspective on how culinary styles evolve over time while still translating layers of life experiences, I Am From Here is pivotal in the culinary space as an iconic cookbook that celebrates immigrant narratives and cuisines. It is not just another cookbook containing a mix of Indian and fusion cuisine. Nor is it just the debut cookbook of an award-winning celebrity chef. This is a book for those of us who keep cookbooks on our nightstands and enjoy reading them for their detailed headnotes that transport us into kitchens, dinner tables, and markets across the world. It is for readers who not only love to cook but want to learn about a chef’s inspiration and creativity. Bhatt shows that like the Indian masala dabba, it isn’t always a set of spices that make a dish. It is about where and how it all comes together into your life that makes it memorable.

More importantly, I Am From Here carries a message far greater than its collection of dozens of mouthwatering recipes, more nuanced than the weights and measures of the ingredients, and more detailed than the cooking instructions. Bhatt encourages readers to take a critical look at not only one’s roots but also how we grow as a community. He emphasizes, “Be proud of where you came from. Make yourself comfortable in the place you are now, claim it, embrace it, be an active citizen. It matters. Otherwise, you always end up being a foreigner. Explore. Don’t be afraid to explore flavor. . . most of the time, the journey of exploration leads to something fun.”

Nandita Godbole is an Atlanta- and Los Angeles-based author of many cookbooks and a food-novel. Her upcoming cookbook, Masaleydaar: Classic Indian Spice Blends is due out in December 2022. Her work has been featured on Healthline, Epicurious, Washington Post, Thrillist, Eater, The Boston Globe, Atlanta’s NPR/ WABE, Forbes, CNN, CondeNast, BBC-Future, NBC, NBC-Asian America, and others.

With Cardamom and Black Pepper 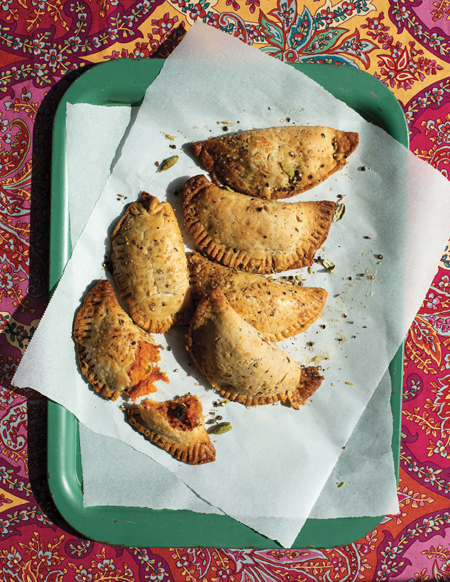 Recipe excerpted from I Am From Here: Stories and Recipes from a Southern Chef by Vishwesh Bhatt.

Ingredients for the sweet potato filling:

Ingredients for the dough: 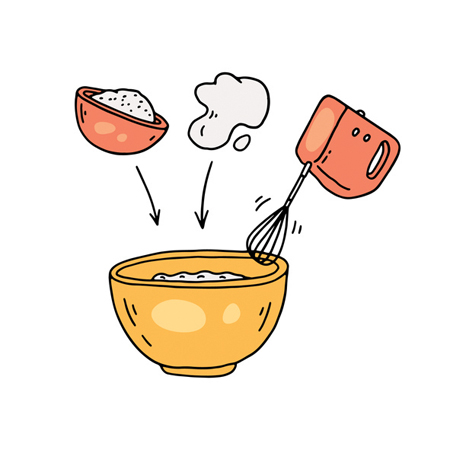 Preheat the oven to 350°F. Line a sheet pan with parchment paper.