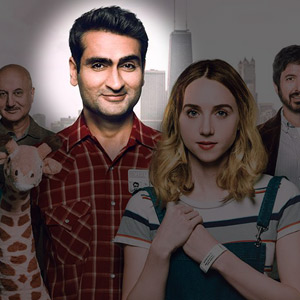 The star of the runaway hit, The Big Sick, speaks to Khabar about portraying himself and his family, warts and all, for the world to see, the struggles of South Asian artists getting stuck with stereotypical roles, and on whether different cultures can co-exist while being true to themselves.

Ten ticking minutes which won’t ever come back are a valuable commodity. You could spend them waiting for the subway train to arrive or watching your chicken biryani cook on the stove.

Or you could spend ten minutes having a most happening conversation with the very happening Kumail Nanjiani! Well, that’s what I was lucky enough to do—and I tried to squeeze an hour’s conversation into those ten minutes—and we really talked fast!

In case you’ve been on another planet for the past year or so, you may be wondering who Kumail Nanjiani is. Well, he just happens to be rising Asian stand up comic in America, star of the popular TV series Silicon Valley, and now the star and co-writer of the critically acclaimed film The Big Sick, which has got great reviews from just about every media outlet from The New York Times to the smallest blogs.

The Big Sick is the love story of Kumail Nanjiani and his wife Emily—an American story for our times. Yes, immigration, love, breakup and marriage, sickness and coma, terrorism and multiculturalism all come into it but it’s always upbeat, always funny.

Nanjiani also happens to be South Asian and Muslim and so has had to always fight stereotypes. The mainstream expects him to play terrorists or taxi drivers, and South Asians expect him to be a shining role model of the model minority! He certainly knows how to draw the humor from the stereotypes of his life and be the first one to laugh at himself.

Nanjiani, being Pakistani-American, has always used humor as his calling card, his armor, his weapon, and his irresistible magnet for attraction. Called to give the commencement speech at his college, what sagacious advice did he give the graduating students?

“Have sex with an immigrant,” he told the graduates of Grinnell College in Iowa. “We’re going through a tough time right now, and it would just be really great for morale.” We don’t know whether any of the graduates took this advice to heart. Or whether the administration of Grinnell College minded that he joked that people always thought he had gone to Cornell instead of Grinnell! The commencement speech was definitely an unqualified success because Grinnell College did present him with an honorary Doctor of Humane Letters.

Recently Kumail Nanjiani, Ray Romano, Zoe Kazan, and Aidy Bryant and some of the actors of The Big Sick were on a live comedy tour. I was fortunate enough to see them at the Sony PlayStation Theater in Manhattan. Nanjiani is a wonderful comic performer with those innocent eyes and a smile almost always about to break through that sweet, serious face. For fans it was quite a treat to see both Zoe Kazan, who plays his wife in the film, and Emily, his real wife, on the stage and actually get them to answer questions.

Some days later there was an opportunity to talk with Kumail Nanjiani one-on-one at a press week at the Four Seasons Hotel but I came down with a bad case of laryngitis and had to miss the event. When my voice returned, I was able to have a croaking conversation with him via a phone call which was wedged into his crazy busy schedule. 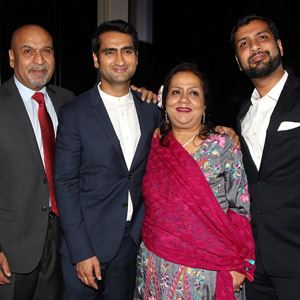 (Left) Kumail, with his parents and brother.

I asked him how it felt to have his life story up on the big screen and what the reactions of his family had been, considering they are all portrayed, warts and all, for the world to see! Nanjiani said, “It was very therapeutic and satisfying—getting to tell our life story and having people watch it and have an opinion on it. It was strange, because you have everyone you know see it and everyone you don’t know see it!”

He added, “Emily’s family loved it and so did my family. It was a little jarring for them to see our story up on the big screen but I prepped them for it months ago—I called them and told them about the movie. They were very supportive from the beginning.”

Asked about the challenges of The Big Sick, Nanjiani said it was difficult to focus on a tough time in their life and relive it: “It’s very easy for something bad to happen to you and then never think about it. We had to think about every single detail and relive it! I had never done dramatic acting before so that was challenging, too!”

Since he had never been the star of a movie before and both he and Emily had never written a comedy before, those were challenges, too. He recalled, “We were very lucky that the biggest comedy producer believed in us and wanted to make it. That really helped. We wanted to tell it our way and wanted to make it in a very specific way, on a very low budget. From the first draft we knew we would only be able to make it right if we were able to make it cheaply. So while writing, we were really aware of that. We didn’t pay any of the actors very much. Nobody’s made money on this!”

Does he feel the movie industry has opened up for South Asian actors? Had we come a long way from when Apu of The Simpsons was the sole South Asian rep in America?

I rattled off the names of noted South Asian actors from Mindy Kaling to Aziz Ansari. Nanjiani pointed out that the very fact that we could name all the South Asian actors meant we still have a way to go. He said, “I won’t say the market has opened up. It still feels like a struggle to make these kinds of movies. There’s not much representation, so it is very difficult. It’s changing a little bit; it’s a lot better than it’s ever been before. At least people are aware that they should stay away from stereotypes. I think there are more opportunities but it’s still very difficult for us. There just aren’t that many parts for us.”

Recently after The Big Sick was released, there were articles by South Asians which criticized the fact that on screen, Asian men always tend to go for white women while South Asian women are not portrayed as important or powerful. So how does Nanjiani deal with the pressure of being the spokesperson and role model for the entire South Asian community?

As he emphasized, “Our story is just a love story but people want it to be THE story which will normalize Muslims! I don’t think any one story can do that. The fact is, it’s true—there aren’t that many stories from our point of view. No one story has the potential to portray the totality of the South Asian experience.

Indeed, as I noted in my review, The Big Sick is about different people, different colors, misunderstandings and understanding, about South Asians and Americans creating a life together in a frenetic city. It is a movie about America today.

So that was my ten minutes of interaction with Kumail Nanjiani.