People: The Idea of Ramanujan 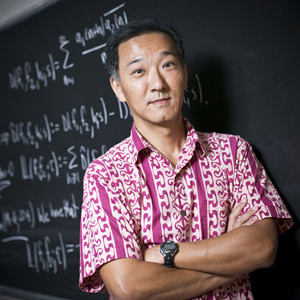 From the shadows of the past, a great Indian mathematician inspires a Japanese-American professor … and how this has contributed to the making of the recent Hollywood hit The Man Who Knew Infinity.

Growing up in the United States during the1950s was tough for Ken Ono, whose parents moved here soon after the end of World War II. America was unwelcoming of Japanese immigrants and Ken grew up isolated from the mainstream community around him. Life wasn’t easier at home either, thanks to his brilliant but sternly disciplinarian mathematician father and “tiger mom,” both of whom had determined little Ken’s life goal early on—to acquire a Ph.D. in mathematics from an Ivy League college. Forbidden from social and sports activities, Ken struggled for years to live up to his parents’ ambitions and even dropped out of high school. Later, he gained admission to the University of Chicago, but was less than enthused about academics. Eventually, Ono found his feet and grew to love mathematics, going on to become a professor in the subject. Traumatic childhood memories, though, continued to haunt him, leading once to a failed suicide attempt.

Amidst the choppy waters of Ono’s life, a late 19th century-born figure emerged as a mysterious source of inspiration—the great Indian math genius, Srinivasa Ramanujan. There were parallels in their lives that resonated in the young Japanese-American, desperately seeking a way out of his inner turmoil. Like Ono, Ramanujan did not have an easy childhood, albeit for different reasons. Ramanujan’s poverty stricken parents from Tamil Nadu could barely put him through school. Later, his single-minded devotion to math, to the exclusion of all other academics made him a misfit in the educational system. But there was no stopping the young prodigy. Stuggling through poverty, he continued his research, sent his work to leading mathematicians at Cambridge University, and finally was recognized by Professor G. H. Hardy, who invited him to England and nurtured Ramanujan’s genius. Ramanujan died young in 1920, a brilliant mind cut short by illness.

To the youthful—and very depressed—Ono, Ramanujan’s amazing but tragically brief career, his dropping out of college, and struggle for recognition was a deeply appealing story. Mystically, it seems, Ramanujan kept surfacing through Ono’s college years and a “bond” was formed, ultimately pushing Ono to develop a passion for mathematical research. 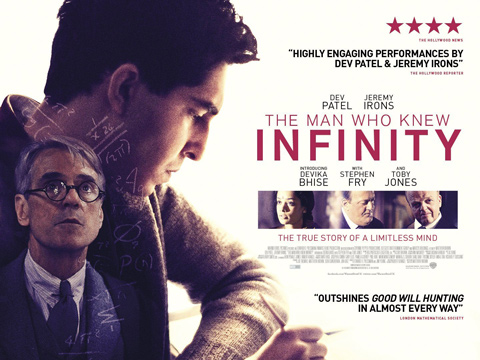 Ono’s lifelong interest in his inspiration, Ramanujan, culminated in him being asked to become the “math advisor” and later the associate producer of the film, (left) The Man Who Knew Infinity.

Ono’s Ramanujan “connection” has taken him along other, unexpected paths as well. In recent times, the producers of the Ramanujan biopic The Man Who Knew Infinity turned to Ono as “math advisor” for the film; he eventually became an associate producer on the project. And now, there’s My Search for Ramanujan: How I Learned to Count—Ono’s new memoir, co-authored with his friend and popular science writer Amir Aczel who persuaded Ono to pen his life story (sadly, Aczel did not live to see the publication). 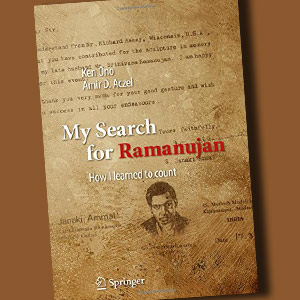 My Search for Ramanujan: How I Learned to Count—Ono’s new memoir, co-authored with his friend and popular science writer, the late Amir Aczel.

Ken Ono has made peace with his past. Undoubtedly, the “presence” of Ramanujan, has contributed seminally to that process. In all these years, his work in mathematics has been based primarily on Ramanujan’s research and thought—the visionary mathematician remains a steady, continued source of inspiration.

Can you talk about being the child of Japanese immigrants?
My parents suffered hate crimes, and as a result they raised us three boys in fear of our neighbors. The windows of our kitchen were shot out with a shotgun. Neighbors left burning paper bags full of dog shit on our patio.

Although circumstances improved by the 1970s and 1980s, my parents never forgot their harrowing first days in America. As a result, we were locked up in [what felt like] isolationist Japan when we were home. My parents raised us in the belief that young Japanese-American boys can only succeed in America by being great math students and talented musicians. [They] expected us to be the best students at school, and forbade everything else. We never went to the movies. We never went to baseball games. Instead, I was doing geometry problems for homework by the time I was in second grade. I came to resent my circumstances, and I suffered under the tremendous pressure that my parents imposed on us. By the time I was in high school I wanted to run away.

How did your knowledge of Ramanujan help you when you were choosing a professional path?
A letter from India arrived at our house in 1984. It was a short thank you note from the 80-year-old widow of Srinivasa Ramanujan. The letter thanked my father for helping fund the commissioning of a sculpture of this man. My father then told me that Ramanujan was a two-time college dropout who had changed mathematics with his creativity and vision.

I latched onto the dropout part. I was relieved to learn that my parents revered a dropout. The story about Ramanujan gave me hope that I could one day live up to my parent’s expectation.

What were some of the struggles you had as a college and graduate student?
I was a terrible student. It took me many years to overcome my childhood—the math problems I had to solve beginning in second grade, my inability to earn test scores that impressed my parents. Nothing I ever did in school was good enough even though I was one of the top students at school. My parents didn’t believe in offering praise. Instead, they believed that by depriving us of praise we would be hungry for success. I reacted by giving up on myself. I dropped out of high school, and I almost never made it to college. When I did make it to college, I was much more interested in making up for lost time.

Before my senior year in college I came across a TV documentary on Ramanujan. I had not thought of Ramanujan in four years. I watched the show, which filled in many of the details about Ramanujan that I had wondered about. [It] was a wake-up call.

I still had one year left in college, and I decided to try in my classes. Thankfully my new commitment to my classes paid off. I was noticed by Paul Sally, who took me under his wing.

Sally made calls on my behalf, and he got me admitted to top Ph.D. programs when I didn’t have the grades. Although I had strong test scores, I graduated college with a 2.7 GPA. On paper I had no business in a Ph.D. program of any quality.

When I started at UCLA in the Ph.D. program, I still thought that mathematics was all about test scores. I didn’t understand how to see beauty in mathematics, and I definitely didn’t believe that I would one day prove theorems that anyone cared about. My Ph.D. advisor Basil Gordon transformed me. We took long walks on the beach. We listened to Chopin. We read poetry. We did all of these things so that I could finally see beauty in the world. He needed me to find beauty and art and passion which he hoped would apply to my view of mathematics. He helped me see the world for its wonder, and then he introduced me to Ramanujan’s mathematics.

Before graduate school I only knew Ramanujan [from a distance]. Gordon introduced me to the true Ramanujan, the formulas which he recorded that were visions from his goddess Namagiri. They were breathtaking, and I have been following Ramanujan ever since. It has now been almost 30 years.

Can you explain in layman’s terms the significance of Ramanujan’s work? For example, what of today’s tech and science comes from his findings?
Although Ramanujan’s work is in pure mathematics, his ideas have been put to good use in many surprising ways. We are presently using his ideas in black hole physics, objects that we weren’t ready to contemplate when Ramanujan was alive. His ideas are also put to use in the modern world of the Internet, implemented in cryptography, and in the design of efficient networks.

I am currently working on several projects related to Ramanujan’s mathematics. The most exciting project right now is mathematical physics. My group proved the ‘umbral moonshine conjecture’ (on Discover magazine’s 2015 list of top stories in science), and we now understand that the conjecture has implications to gravity and string theory.

Mathematics is such an empirical science. Yet, as per Ramanujan himself, his significant mathematical insights came to him from a transcendental source. Can you comment on that?
Science usually [progresses] through the work of thousands, slowly adding to a body of knowledge. However, every once in a while a fireball comes along that propels human knowledge forward. This is what we have in Ramanujan. He claimed that his ideas came to him as visions from the Hindu goddess Namagiri. Although I am not Hindu, I strongly believe that there is much truth to this, in the sense that Ramanujan’s ideas were somehow spiritual in origin. His work is not the product of hard effort. His contributions are pure inspiration.

There are many types of successful scientists and mathematicians. There are those who are expert learners, [who acquire] a tool kit of methods that makes them great problem solvers. There are others who are great adapters, people who recognize the importance of contributions in another field which can be put to use in new ways. Finally, there are the visionaries like Ramanujan. These are people who offer glimpses of the future by setting the path forward in fields which have been stagnant due to a lack of imagination. 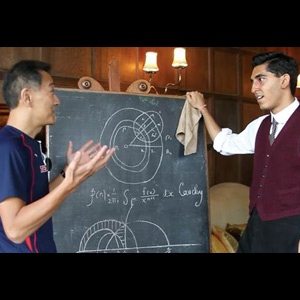 Ken Ono with Dev Patel on the set of the film. (Source: Science Friday)

What was it like being the math adviser for the movie about Ramanujan?
It was super fun working on the film. I worked on the film props. I helped tweak the script with Dev Patel and Jeremy Irons. And I have traveled the world promoting the film with the actors. It has been a thrilling experience.

Talk about your new project to find and assist young people who are gifted in math.
With the help of the Templeton World Charity Foundation, we are seeking to provide such opportunities for undiscovered math talent. We are scanning the globe for this talent. We will be awarding dozens of Templeton-Ramanujan awards to those who represent the best in undiscovered math talent. We have already found a 10-year-old boy in Qatar who has been working on mathematics in isolation (frankly, living in a desert). Iswar even discovered his own method for computing digits of pi!

What advice do you have for the parents of gifted children?
The idea of Ramanujan is that greatness and talent is often found in the most unexpected of circumstances. Indeed, Ramanujan was a twotime college dropout who hailed from a lush village in south India. What if he had not written to Cambridge mathematician G. H. Hardy seeking help? What if Hardy had not responded to his plea for help? The thought is not something that I can absorb.

There are Ramanujans all over the world today who need to be brought into the light. I strongly urge parents to seek challenging and engaging activities for their kids. Moreover, I hope these activities do not amount to the mere pursuit of grades and strong test scores. Instead, seek opportunities which inspire passion.

Franklin Abbott is an Atlanta psychotherapist and consultant, writer, and community organizer. Visit his website at www.tenminutemuse.wordpress.com.