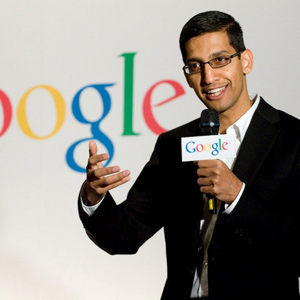 The new CEO of Google is the latest amongst a growing number of Indian-Americans at the helm of some of America’s most iconic companies. Sure, Pichai’s rise is a tribute to the meritocratic culture of Silicon Valley, but what are the qualities and circumstances that propelled him to the top?

Sundar Pichai’s meteoric rise in Silicon Valley at one of the world’s most powerful technology companies shows that the American Dream is alive and well. There is nothing accidental about the anointment of quietly driven 43-year-old Pichai as Google CEO.

Google Chrome—the engine that powered Pichai’s meteoric rise
The soft-spoken middle manager emerged as a clear No. 2 to Google co-founder Larry Page with the launch of the Chrome browser in 2008, which blazed past Internet Explorer and Firefox to become today’s dominant browser.

Chrome’s success paved the way for a series of related strategically important products including Chrome OS, Chromebooks, and Chromecast.

“It became the engine that powered Pichai through one of the fastest corporate ascents in the technology industry,” said Fortune.

Since he joined Google in 2004, Pichai has grown his product fiefdom to include Chrome OS, Android, search, Google Drive, Maps, apps, Ads and more. Google watchers say that Pichai, who is well-liked and respected by his colleagues, has already been playing a hands-on role in the company’s everyday operations.

“In essence, Pichai was given keys to the $444 billion car he was already driving,” noted USA Today as Google founders Larry Page and Sergey Brin handed Google’s reins to Pichai on August 10.

The market endorsed the restructuring of Google, creation of Alphabet, and Pichai’s elevation by sending Google shares up by six percent in trading following the regulatory filing.

Clearly, a generation of Indians have benefited from upbringings in a people-centric culture that puts a store on humility, modesty, close-knit family ties, and diversity.

“Indian leaders view sustaining employee morale and building company culture as critical. People are viewed as assets to be developed, not costs to be reduced, and as sources of creative ideas,” said Michael Useem, Professor of Management and Director of the Center for Leadership and Change at the Wharton School.

Useem, who has co-authored the book, The India Way, says Indian CEOs are generally more adaptable, flexible, and resilient. They have grown up dealing with adversity, unpredictability, and scarce infrastructure whether we are talking about power outages or nightmare traffic. A competitive drive emerges naturally in a country with a billion people and limited opportunities.

“They have a personal steeliness and are unflappable,” said Useem.

A new cross-cultural survey from Southern New Hampshire University said Indian managers had strong leadership traits. They are future-oriented, and had a “paradoxical blend of genuine personal humility and intense professional will,” the study said. “Indian leaders achieved extraordinary results and built great organizations without much hoopla.”

Diplomatic, collaborative, and likeable
Pichai scores very high on the likeability scale and has the ability to make tough decisions without rubbing people up the wrong way. The words colleagues use most often to describe him are “affable” and “nice guy.”

“He has integrity, intelligence, and a decency about him,” quipped a colleague who worked closely with him on building out Chrome.

Chris Beckmann, who was a project manager at Google for several years, said Pichai was “incredibly talented and hardworking.”

“He avoided making enemies. Google has politics like any other large company, and Sundar navigated those politics to make his team successful while inflicting the least possible damage on any other team,” Beckmann said in a post on Quora.

According to people familiar with the matter, Pichai found himself at odds with Andy Rubin, the creator of the Android mobile operating system when Rubin’s team created its own Web browser, which it preferred to Chrome built by Pichai’s team. However, Pichai avoided getting into a skirmish with Rubin and just let the situation blow over. In 2013, Google made Pichai Rubin’s successor as head of Android.

“Pichai is collaborative and diplomatic. These are useful traits in keeping internal conflicts in check within Google as growing teams step on each other’s toes,” said a Google engineer, who didn’t want to be named.

Building great teams
We all know that great teams whether composed of super athletes or business people have an intense, shared passion to achieve a specific goal. According to colleagues, Pichai excels in getting the team passionate about the mission. Apparently he is generous about giving full credit to his team which no doubt adds to his likeability quotient.

“He recruited, mentored, and retained a great team. Sundar’s team of product managers had a reputation as being among the best of the best, similar to the reputation of the software engineers within Search Quality,” Beckman wrote in Quora.

Yet another testament to IIT
Indian American corporate leaders are products of an investment in higher education. A lot of them coming of age in the executive suite in America are educated at one of two legendary institutions founded in the 1950s and 1960s, the now seven-city Indian Institute of Technology (IIT) and the six-member Indian Institutes of Management (IIM).

Pepsi CEO Indra Nooyi is educated at IIM Calcutta while Microsoft CEO Satya Nadella studied at the Manipal Institute of Technology. Pichai, who was born in Chennai, comes from the same IIT as Arun Sarin, the former CEO of Vodafone Group.

Pichai was born in Chennai and had a humble upbringing. His family didn’t own a car or television and lived in a small two-room apartment with a number of family members. As a result, Pichai didn’t have a bedroom and slept on a mattress with his younger brother in the living room floor.

Bookish and quiet, Pichai studied metallurgical engineering in the Indian Institute of Technology, in Kharagpur. He obtained a Master of Science degree from Stanford University and even toyed with the idea of following it up with a PhD to be able to join academe and become a professor.

“He won a scholarship to Stanford University to study materials science and semiconductor physics. The plane ticket to America reportedly cost more than his father’s annual salary,” reported The Telegraph.

Early signs of brilliance
However, after obtaining a Master of Science degree from Stanford University, Pichai veered towards an MBA from the University of Pennsylvania’s Ivy League Wharton School of Business.

At Wharton, Pichai was honored both as a Siebel Scholar and a Palmer Scholar. Deans of 27 top-ranking schools in the U.S. and four other countries handpick Siebel Scholars on the basis of outstanding academic performance and leadership to receive a $35,000 award.

In America we have the rise of a Henry Ford, from farm boy mechanic to world business tycoon. It’s a reflection of the spirit of America and the meritocratic culture of Silicon Valley that by 2012, nearly 16 percent of start-ups had an Indian founder even though Indians make up barely 6 percent of the Valley’s population. It is also a nod to the meritocracy in Google and Microsoft that Pichai and Nadella have reached the top positions.