Home > Magazine > Features > People: A Pardesi who is a Pukka Desi

People: A Pardesi who is a Pukka Desi 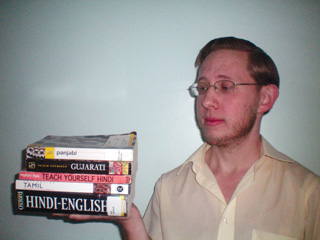 Meet Christopher Sweet, a college student born and raised in Michigan, who has never stepped out of North America. But get him started on speaking Hindi, Urdu, or even a smattering of Tamil and Gujarati, or watch him play the tabla or harmonium, and you’ll realize this Caucasian can shame many desis!

It’s not very often you come across a blond-haired, blue-eyed 22-year-old of European descent who knows enough desi songs to indulge in a game of Antakshari. Christopher can take his pick from bhangra to Bollywood and even has an opinion on the whole ‘Kolaveri’ phenomenon. He also listens to qawwalis and ghazals, naming Nusrat Fateh Ali Khan amongst his favorites.

An undergraduate student at Saginaw Valley University, majoring in international studies with history as his minor, Christopher began to be aware of languages at a fairly young age. “My interest in South Asian culture stemmed from the fact that my mom, a geography teacher, was Euro-centric, and so I sought out learning more about Asian cultures. The library had many language books, a good collection. I started with learning Arabic in the 7th/8th grade, then Hindi and Urdu because of the script, and then Punjabi for about three years. I know some Gujarati, too. I was interested in phonetics, so I learned the Devanagari script and from there went on to Bengali, Tamil and Oriya, some Kannada, Telugu and Malayalam as well. There are so many European languages that are learned but other languages are headed for obscurity, especially Eastern languages or even Arabic and African languages, but if we have to be a global community then we need to learn other languages as well.”

Christopher’s love for all things desi extends beyond just the languages he has taught himself. He enjoys Indian food, going to cultural events like Garba and Diwali, and watching movies so much so that this is taking over his American identity. His accent has grown more desi over time, and sometimes Americans ask him where he is from! Not having many friends from the South Asian community while he was growing up certainly made practicing the languages he learned a tough task, but now he has many friends that he can speak with—in college, in the International Students Club which he is a member of, with professors who are Indian, and even a grocery store owner nearby.

In an effort to convey more about South Asian communities and his own desi-ness to the English-speaking world, Christopher writes a blog called Swadesi Pardesi where he comments on all aspects of being desi, no holds barred. A novel he is currently writing is centered on an immigrant in Toronto, and explores South Asian cultures and the hardships and the euphoria of living in another land.

Christopher offers an insider’s perspective on the stereotypes and prejudices mainstream America has of Indian-Americans and India. “In my experience, the prejudices in general are mostly the same as what you would expect to find. Many Americans think of Indians as strange foreigners with an inaccessible culture and horrible accents. I also know that a lot of desis are viewed as hard-working and smart, but often in a  detrimental way. They are seen as the geeks that people go to when they need their computers fixed, the coolies of the rest of technological America. The idea of White Man’s Burden also seems to live on, and if you specifically ask someone about Pakistan, you will often get the impression from them that all Pakistanis are somehow terrorists. Some Americans view desis as dirty or smelly; as Suketu Mehta put it in his book Maximum City, he was viewed as a dark stranger ‘emitting the foul smells of his native cooking’ by many at the Catholic school he went to in Queens as a boy. Americans also think of Indians as somehow unable to be integrated into American culture; they might approve of bhangra rhythms and smile at colorful racks of saris, but somehow they still seem to view desis as foreign, separate from America. This does not mean that all Americans do not think well of Indians, or cannot, but I think there is still quite a long road ahead for desis and their integration into American society. I hope my example is potent enough to spur others into thinking differently about desis.”

So how do desis react when a gora speaks in their tongue? “Most people respond with surprise and some in awe when I speak in an Indian language, and they ask me many questions in return. When people hear me speak so well they say, ‘Masha allah, itni achchi zubaan bolte ho,’ but some start laughing when they realize I understand what they are saying. When you show that you know what you are talking about, people are very welcoming. Older folks especially like it a lot when I know old film songs. Youngsters are fine with it, too, but usually have diverging interests. My family, though, thinks I am a bit eccentric, they joke about me. They don’t see it as a good or bad thing, but they tolerate it.” 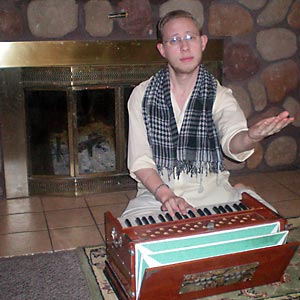 Polyglot that he is, Christopher could pretty much visit any part of India he chooses. “I want to visit Asia—India, Pakistan, Bangladesh, northern India—Delhi, Punjab, Uttar Pradesh, Rajasthan, Gujarat, and Himalayas. I intend on further studying both Hindi/Urdu and Punjabi, and becoming a translator in my professional life. I would like to be in some service helping immigrant families adjust to the American lifestyle. I feel the best way to learn is to be in the environment where the language is spoken, and to be immersed in it for some time. Also, having taken two semesters of Arabic and seeing Urdu’s relations to it, I feel I might like to delve into Sanskrit so as to refurbish my Hindi.”

Christopher has been watching Hindi movies since high school, borrowing VHS tapes from the grocery store, but is now confident enough to watch movies without subtitles. “My favorite actor is probably Dev Anand, due to his style of acting and the sensibilities he added to his films. My favorite actress is Jaya Pradha—she was absolutely stunning in Sharaabi, which is among one of my favorite films. My favorite film, however, is Zanjeer, given the story line’s intrigue and the characters in the film, particularly Pran’s Pathan character. My favorite singer is absolutely Mohammed Rafi, due to the mastery he had of putting emotions into his voice. I subscribe only to Khabar Magazine and read several blogs: The Life and Times of Two Indians in Pakistan and Kaaall. Online, I visit Panjab Radio a lot, along with Fropper.com, Raag.fm, Smriti.com, Chandrakantha.com, and others.”

“I would definitely love to meet Bollywood celebrities, particularly Amitabh Bachchan and Shah Rukh Khan, but also other characters, mostly from older films, like Manoj Kumar, Asrani, Naseeruddin Shah, Jaya Pradha, Hema Malini, Dilip Kumar, Pran, or Prem Chopra. Dev Anand would be on the list also, but I heard that he passed away this last December. So far I have only met Vinod Rathod, and apparently I missed a performance by Yesudas at my university a few years ago. I would have liked to meet Dhirubhai Ambani, the entrepreneur, since I’d heard a lot about him, but he passed away a few years ago as well.”

A self-taught musician, Christopher learned to play tabla in the 11th grade when he asked for it as a Christmas present, and has been adding instruments to his repertoire since. He now plays the dholki, dhol, harmonium, tumbi, keyboards, and guitar, although stringed differently to be able to play classical music. “I would listen to recordings, memorize and replay them. I would also watch Youtube videos but can now play elaborate tabla solos just as well.” He has performed recently at his school’s intercultural expo as part of the Pakistani team, playing the tabla. A fusion artist, he uses bhangra and Western elements in his music recordings. He doesn’t listen to mainstream American music, dabbling in some jazz, at most.

With a strong drive to absorb everything from Sikhism to shayari to Urdu calligraphy, Christopher is sure to find a sweet spot with many in the South Asian community, including the desi ladki he hopes to marry one day!

Ruksana Hussein is a communication specialist and freelance writer based in Atlanta.