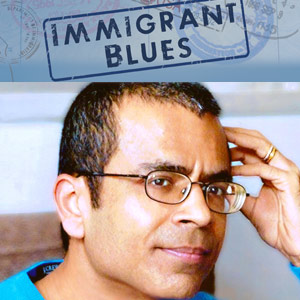 When a young Akhil Sharma moved with his family to the U.S. in the 1970s, the Indian-American community was also young—and small. Sharma’s older brother made the family proud, but then tragedy struck. In Akhil Sharma’s Family Life, a poignant fictionalized version, we hear the story from the younger brother’s point of view. He recently spoke to Khabar.

How does an immigrant family, newly arrived from India, navigate the parameters of their adopted country while they cope with a personal calamity? That’s the story Akhil Sharma sets out to tell in Family Life (W.W. Norton), his second novel after An Obedient Father.

The new novel opens in Delhi in the ’70s when Indira Gandhi’s Emergency is the last straw that breaks the senior Sharma’s back. With two young sons to care for, he decides he must leave for the United States, a country that exercises a strong pull as a mecca not just for its riches but for the opportunities it might afford in educating his children. Unfortunately, just as assimilation is off to a shaky start, an accident leaves the older boy brain-damaged and distorts the family dynamics in all sorts of ways. Ajay, the younger son who is just eight when the Mishras emigrate, narrates the story in first person as he recounts the desperate measures taken to keep going despite the pain. Ajay’s father takes to drink while healers of all stripes show up regularly to try and restore a sense of normalcy.

The novel, carved from Sharma’s own life, can be read as an immigrant’s narrative with its attendant displacement blues. The first person point of view also makes this a unique coming-ofage story. Ajay might be a stellar student but his path through childhood is understandably warped by this tragedy that forever looms large.

In one of the most telling scenes, Ajay cries when he does not receive a single present at Christmas:

We’re allowed a brief peek at that self-centered child hiding behind a boy who has been forced to grow up way too soon. Eventually Ajay uses the only way he knows how—good grades—to achieve his own kind of redemption.

A profoundly moving story without a hint of melodrama, Sharma’s latest is a home run—it showcases our universality even as it focuses on one family’s difficult yet graceful life.

Most Indian-American authors worry about being pigeonholed—you almost seem resigned to the process. I heard an Iranian author recently say that an identity defines you but your imagination does not. It’s interesting how you go beyond that.
It’s sort of like, I imagine that you and I are very different because of our different backgrounds, sure, and also because you’re a woman and I’m a man. But I’m sure you love your parents and you love all these different people in your life and you have all these different worries in your life, which are almost exactly the same things that I value. People say, “Oh, this is an immigrant story,” and it certainly is, but it’s also about what it means to be a human being.

I viewed it mostly as a coming-of-age story. To me the most telling moment is when Ajay breaks down and says he want a Christmas present. Being self-centered is normal for children, yet he feels guilty about letting that slip. Can you talk a little bit about that?
I’ll tell you one of my experiences. After my brother’s accident I used to start crying in class. I would think a little bit about my brother being in the hospital and I would start crying. My teacher never really asked what was the matter. She would tell me to just leave the class and I would go outside to this school field and walk along the fence and cry and cry, and after a while, after crying so much I would get tired and lie down on the dirt and go to sleep. And again, this is common. I don’t want to say this is something that happens just to me. Many little kids have had terrible things happen to them.

I guess my point is that Ajay is racked by a terrible survivor’s guilt, but at the same time he is consumed by petty childish concerns. I found that dichotomy to be really interesting.
When I used to walk around crying, I used to talk to God in my head. And I imagined God asking me, “Hey, would you switch places with your brother?” And I immediately said no. Then I thought, “Oh, I’m not a good boy, I’m not a good brother. I can’t be trusted.” I began to watch myself with suspicion. You know life goes on and you want to be happy. Terrible things are happening around you, but you know you would like to be happy, too. I remember my brother was in the hospital, and I would want to have comic books to read. My parents would be upset that I wanted to read comic books. These are just very ordinary things.

In the book, it is hard for Ajay to go to school on Diwali. He feels alienated. One of my friends once said that the two most difficult days of the year are Christmas and Diwali. Can you talk a bit more about how this experience is for immigrants?
When I was writing the book all these memories were coming back. I remembered how sad it was for me but I just want to say that I think that this experience is common. I remember going to a movie once on Christmas eve, and I and this black woman with her little kid were the only ones there. She must not have had any place to go. So we all feel this either over the holidays and also to some extent when, say, a divorce occurs and it’s now what used to be the wedding anniversary. What we all share is the experience.

I was struck by how Ajay and his family’s home becomes a sort of pilgrimage for other Indians in the area. Can you talk a little bit about the role of faith, not just faith as in religion, but in getting through this tragedy? It was very curious to see how that played out.
We Indians, we really love to admire people. We have a deep desire to respect people. If you look at Indian politics there’s a constant striving to find somebody that we can put our faith in. And that need which is occurring in society in the political sphere is occurring even more strongly in the spiritual and in the personal sphere. It matters to a lot of people that they have somebody they can turn to and trust and that they can go to for advice. It’s hard to know who is deserving of faith; it’s really hard. One of the ways is by looking at their actions: how kind are they, how decent they are. And this family, because of their enormous goodness, the fact that they’re willing to sacrifice this way, is very attractive to the Indians in the local community.

The other thing is, you know, we Indians just love status. We love it. Here’s a family where you have one child who did get into the Bronx High School of Science and this other child who’s just doing incredibly well in school. And so there’s a sense that not only are they really decent people but they’re also people who are enviable in terms of their success and so people would come and visit.

Do you think this was accentuated because of the specific time over which this unfolds? Do you think that kind of large-hearted devotion by an entire community can happen these days even amongst the Indian community?
Because the Indian community was much smaller in the ’70s and ’80s you had people from many different languages, from all parts of India coming together. We were united by the fact that we were Indian. And it didn’t really matter whether you were Gujarati or Tamil. And also because the community was smaller, stories could pass around a little more easily. Now the same thing would occur, but in a smaller community. The scale would be different.

I guess my question is really, does it happen here more because everyone is away from the mother country if you will, and in a sense needs to galvanize around this event?
I think the same thing would occur in India, but what occurs in America is this sort of sacrifice begins to be completed with a little bit of what it means to be Indian. In India, we’re all Indians. What occurs in America is that not only would my mother be respected but, you know, people would say, “Okay, this is what we want Indians to be,” and so in that sense it has greater symbolic weight than it would in India.

How has Iselin (in New Jersey) changed? How is it now different from when you were growing up?
Because the community is so much larger, some of it is less self-aware. When I first moved there, it was so rare to meet Indians. If you would see an Indian on the street, you would stop and pull over just to chat. And because we were a small community we were a little more aware of how we were seen from the outside. To some extent that is still true. But because there are so many more Indian people now, I think we as a community are a little more at ease with saying, “This is not the only way to be an Indian.”

The Delhi that you describe in the book is very different from today’s Delhi. Have you visited recently?
I was there in December. I go to India about once a year and I have watched it change. India is a richer country now than it was when I was growing up. One difference I have noticed is that until the mid ’80s, Indians used to pretend to believe in the Gandhian and Nehruvian ideas of serving each other, that society needs to take care of the weakest. Somehow that’s gone away. And so it feels just very much like “khalo bhai khalo” (eat, brother, eat). Even when people were dishonest back then the fact that they lied and pretended to be honest created a certain sense of what everyone should aim for.

What was the last one you saw?
I saw Oye Lucky! Lucky Oye! That’s a good one.

Poornima Apte is a Massachusetts-based reviewer of literary fiction and narrative nonfiction.