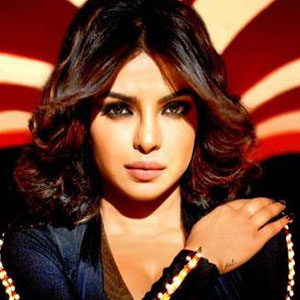 Yes, Priyanka Chopra is all these but she’s also something you would never, ever have guessed in a hundred years.

She’s an FOB—Fresh Off the Boat!

Hard to believe but back in the ’90s, when Priyanka was just 13, she left the small town of Bareilly in India and came to live with her aunt in Queens, New York. The daughter of Ashok and Madhu Chopra, two physicians who worked in the Indian army, Priyanka had grown up all over small towns and cities, wherever her parents’ postings took them. As a gawky teenager she journeyed to the U.S. to become an American high school student.

The stunning actress was recently at the South Asians in Media, Marketing, and Entertainment (SAMMA) Conference in New York as a keynote speaker and suddenly the audience of 250 young professionals found they had something in common with this superstar—most of them, too, had studied in an American high school and been American teenagers!

As she recalled the label of “FOB,” she described the confusing, new world she had entered. “In the beginning I was a little disconcerted because suddenly I was a lot more aware of my ethnicity. I don’t mean I was facing any racism but more that I was understanding that I was from a different world, a different culture, yet somehow that I could find a comfortable place for myself in a melting pot of such different individuals. I was no longer one of many of the same people, I was somehow interestingly different but yet learning and blending into the new culture, and imbibing what was going on around me.”

“I was transported into American high school culture in the heart of Queens, NY. High school, as you all know, can be the world’s biggest culture shock and for me it was multiplied like by a billion times! It was a completely new and a foreign move for my life as I had known it.”

As a teen growing up in America, she said that a large part of her journey was fueled by music—hip hop, rap, and RB—and that period still influences her in the music she is trying to make today. “I was a teenager and it was the ’90s—you can imagine what that was like—and I was making mixed tapes from the radio and crying over my crushes, too. I broke some scholastic records, of course I was an honors student, but at the same time I broke someone’s nose too! I was suspended from school for three days—it was a proud moment in my life!

“I always did my chores and I spent all my pocket money on clothes. I was a good girl but I still managed to give my family a few sleepless nights! I went from being this good Indian girl from a small town in India to being a soul sister in my head, complete with the braids, puffy jackets and gold hoops. For real, yoy!”

Three years later the American odyssey ended, and Priyanka left, to go back to her parents and family. She was 17 and just six months later the fairy tale began: she won the Miss World title—and life was just never the same again.

“I fast-forward some years later and I’m right here, pretty much in the same place,” she told the SAMMA audience. “I’m fresh off the boat all over again, presenting another side of me from a gawky teenager to a debutant recording artiste—things are different now but the feeling is very similar. It all feels completely new—very, very scary.” 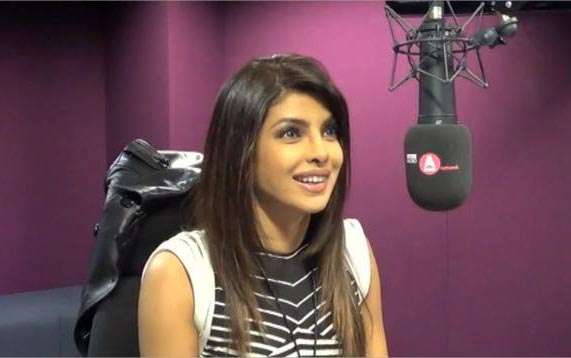 Of course, the fact is she’s a celebrity and she already has made a big splash. Universal Music Group signed her to a worldwide recording agreement with Desi Hits. Her music career is being managed by Atom Factory, which also manages Lady Gaga. She’s the first Bollywood star to be signed by Creative Artist Agency in LA. She has collaborated with Sam Watters, Matthew Koma and Jay Sean on her first album. Her first single, “In My City,” with rapper will.i.am debuted for the NFL Network’s Thursday Night Football.

Priyanka spoke about this second journey into America, a musical journey: “This time around, however, I quite deliberately brought my culture and background with me and fused it into my music, whether it was a melody, a tune, dance moves, lyrics. It was something that was very important to me.”

Unlike other Bollywood stars, she displays no star airs and in spite of being a celebrity, she talked of the things she had in common with the audience—her growing up years, the risk-taking, and the constant hunger to try new things.

“I’m a middle-class girl from a small town in India and today I’m living the dream,” she told all the young aspiring Indian-American movers and shakers. “It’s almost unbelievable for me, and I guess that proves everyone has a chance. If I can do it, then anybody can.” 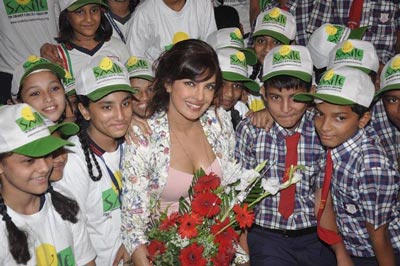 Like her audience, she said she, too, was an amalgamation of both cultures.

“My go-to soul food is daal and rice—or a double baked cheeseburger. I walk the red carpet in the latest couture and also in exquisite saris. My music box will pump out Rihanna but at the same time the latest Bollywood chartbusters,” she said.

“There’s no switch I need to keep flipping. These are all an inherent part of me and when I look around—in some ways we are all connected with this duality of what we experience and how we all strive to be global citizens in our chosen fields—yet try to find a way to hold on to our roots. There’s no formula—there’s no perfect mix—it’s just what we make of it. Our individual ethnicity is intrinsic to who we are, but it is what we do that defines us.”

By the way, a suggestion: in case you ever meet Priyanka, don’t ever, ever use the term “crossover artiste” around her! The superstar, notoriously fit and training for her new movie in which she plays boxing champion Mary Kom, warns, “Ask me about the ‘crossover’—and I will cross over to the dark side! It wants me to inflict some very serious bodily harm!”

Crossover is not what she does, she says. She finds the term limiting, confining her to the box. “I’m test-tubing. I’m throwing things into the mix for a global audience. You can treat it like a science experiment and worry that it will explode in your face, or you can treat it like an exotic cocktail shot. Knock it back and just let go. I’m taking everything that defines me and sharing it to a new audience, and in turn I’m absorbing all that they have to share with me. So rather than limit me, it expands my boundaries of thought, creativity, and ability.”

Priyanka calls herself an entrepreneur and takes risks. Indeed she has become a mini-empire with all her different ventures, be it cinema, music, or endorsements. She is not afraid to take bold action and in fact took a negative role in one of her first films, Aitraaz. From Fashion to Don to Saat Khoon Maaf to Barfi she’s refused to let herself get pigeonholed, and the awards and box office have proved her right.

And now she’s taken on the challenge of a parallel career in American pop music.

Did she have to remake herself for this audience? “The audience is so different, but I want to stay me, because I think I am the amalgamation of the East and the West. I grew up here and I grew up in India. So who likes me will like me, and who doesn’t, won’t. I have realized that you can’t please everybody, and I don’t want to try and be someone else to please a certain kind of audience. I want to be able to be me and see where it goes.”

Asked about how she recharges herself, Priyanka admits that she is finally planning to take her first holiday in 16 years: “I don’t recharge. For me recharging is when I sleep at night. There are very few people in the world who get to do what they love to do. I didn’t even know I wanted to be an actor. I wanted to be an aeronautic engineer. MIT was my ambition in life! Somewhere along the way I realized ‘Damn, I love doing what I do!’ I love being creative. I love being an actor, I love writing, music.

“That’s when I recharge—when I’m at work, the moment between ‘action’ and ‘cut’—when I have that time, when it’s just about creating. It’s lonely but it’s incredibly satisfying.”

Some final words from Priyanka to anyone who is aspiring and has a dream: “I like to push the envelope a little bit and sometimes it works, and sometimes it doesn’t. You have to just dust yourself off! If it works, fine, and if it doesn’t, try something else. I feel the world is my oyster and it should be for every young person.”