Perspective: The Idea of India 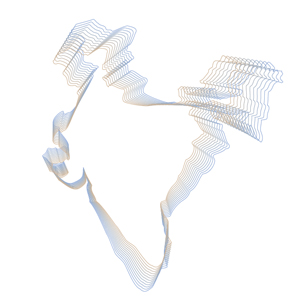 With all its diversity, can India sustain as a single nation over time?

At a time when the BJP, the ruling party in India, has been touting linguistic and religious chauvinism, and seems increasingly tone-deaf to the sensibilities of southern and eastern states, one starts wondering about national integrity. While such thoughts may be premature, one wonders if a breakup might be preferred by the people of a region if the alternative option is to be dominated by a power that is not in sync with their local customs, sentiments, traditions, and aspirations.

After all, India, for most of its long history consisted of separate kingdoms, much like Europe. Consolidation into a single political entity only started happening under British imperialism; and, post-independence, was revved up by Sardar Vallabhbhai Patel’s massive efforts to pull the many small regional kingdoms into the fold of the newly independent India. For the most part, this ambitious tryst has worked out well: India can proudly claim to be one of the most diverse nations in the world— unifying 1.4 billion people of endlessly different languages, ethnicities, customs, and religions into a single national identity.

This has been possible because, underlying the massive diversity, there has been a unifying thread: a shared cultural ethos. The people of the Indic lineage, primarily Aryans and Dravidians, were bound together by an overarching common culture, arising out of the ethos of Sanatan Dharma. The four Mathas of Shankaracharya—Puri (in the east), Dwarka (west), Badrinath (north), and Sringeri (south)—represent, roughly, the boundaries of this “cultural India.”

Therefore, it becomes important to distinguish between cultural India and political (territorial) India—to get a sense of what binds the geographic India, the territory bordered by the Himalayas to the north, flanked by the mountain passes in the northwest, and the seas surrounding the peninsula in the south.

Territorially, India was never one nation until recent history

Throughout its long history, India has been a conglomeration of numerous regional kingdoms, shrinking and expanding, based on the vicissitudes of the times. For brief periods, like during the reigns of Asoka the Great, Muhammad Tughlaq, and Aurangzeb, it came close to being a territorial whole. But these empires never held sway over the entirety of south India, and Assam was rarely under their suzerainty.

The British, through continuous warfare and political arm twisting, brought under their sway, essentially, the entire cultural India. In addition, they annexed territories to the northwest (Balochistan and Northwest Frontier Province), where Muslim religious culture was prevalent, and in the northeast (Nagaland, Mizoram, Arunachal, etc.), where the people were predominantly of Mongolian lineage and practiced Buddhism or some form of animism.

Of course, British India was far from a perfect union. The special, semi-autonomous accommodations offered to many princely states resulted in a tenuous union. And, ironically, the British were also responsible for the partition of India with the splitting of Pakistan and Bangladesh.

Up to a certain extent, India can be compared to Europe, consisting of separate national identities but with common roots (Caucasian) and religion (Christianity), for the most part. Of course, as in India, they too have strong regional identities and sentiments, but, simultaneously, are also defined by their shared experiences as a people inhabiting a specific region over a long period of time, at least a millennium.

In contrast, America and Australia became inhabitedonly over the last 400 years or so, not long enough for similar strong common identities to develop. They are melting pots where groups of people who are culturally vast apart have come together to live amicably under a unified, modern political entity.

For China, another large territorial entity of the world, the trajectory and circumstances were somewhat different. Unlike India or Europe, most of the Chinese population is of a singular ethnic ancestry (Han) and a singular language (Mandarin), resulting in a largely uniform culture pervasive throughout the population.

The evolution of India as a unified political identity

For a richly diverse India to shape up as a single nation, and for it to survive and thrive for the last 75 years as an independent nation, several fortuitous historical forces played a major part. One big reason, of course, was the British consolidation of the country. Then there was the independence movement which united the aspirations of the whole country. The regional identities and aspirations took a back seat for a while. The contributions of leaders like Mahatma Gandhi, Jawaharlal Nehru and many others in this cannot be underestimated. The Congress Party was a national party that was made up of leaders from all parts of India without significant regional biases.

Democracy was established. Uniform laws were developed for the entire country with sensitivity for special groups like the Muslims. Thus was born an India which survives to this day, alive and well, albeit, far from being perfect. Threats to its integrity have always been inherent, and lately, have been fanned by the ruling party.

The risk to national integrity: trampling upon regional sensibilities

The differences in regional identities and sentiments die hard. They often simmer under the surface and find expression at different times and in different ways. In India, some years ago, there was the slogan of Maratha Manoos from Maharashtra. Similar voices with separatist sentiments resulted in splitting of some states: Haryana from Punjab, Chhattisgarh from Madhya Pradesh, Uttarakhand from Uttar Pradesh, Jharkhand from Bihar, and Telangana from Andhra Pradesh. Assam split into five states.

Similar separatist movements rising out of ethnic and linguistic origins have also been evident in Europe in recent times. Old Yugoslavia has broken up into four or five countries; Czechoslovakia has broken up into two. So many countries have split off from old Russia, including Ukraine and Belorussia, which have been part of the Russian nation for centuries. While on our trip to Barcelona in Spain, we came across a Catalonian separatist movement. And even after 500 or so years, the Scottish sentiments of a separate identity have not died out.

This highlights the importance of regional diversity and the strong, deep-rooted sentiments often attached to it. Any satisfactory system of government has to have the sensitivity to appreciate this phenomenon and take appropriate measures to accommodate it for the smooth functioning of the government and for the people to be satisfied. This may require, on occasion, flexibility for regional, religious, and other factors that may arise over time.

A retired civil engineer based in Concord, California, Partha Sircar enjoys freelance writing. He can be reached by email at psircar@yahoo.com.