Perspective: Standing Left of the Right 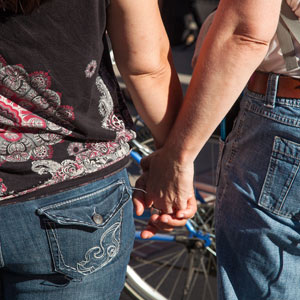 The only way to save marriage, in an increasingly diverse society, is to make the age-old institution more inclusive.

The institution of marriage resembles a lock with multiple combination codes. Different permutations can be applied to different generations and societies.

Among the numerous types of marriages we have witnessed through history, human society has resisted some forms and embraced others based on religious, moral, and personal values. Like that other institution that our world believes important—religion, marriage and its acceptable definition have been in the eye of many a moralistic and intellectual storm, and the matter is clearly far from settled yet.

On our planet of seven billion people, you only need to look around you to know that the number who have either chosen or been compelled to enter into one of marriage’s many avatars is far from small.

Yet others, who want in, are barred by virtue of whom they wish to share that relationship with. As the majority definition of a single man-single woman contract (or sacrament) closes in around us, it leaves exposed and unprotected a pool of humanity that chooses alternative views of the bond, specifically, the gay, lesbian, and queer communities.

In spite of the overall number of married folks in the United States dropping by 20 percentage points since 1960, there remain a staggering number of individuals who choose matrimony over singledom or cohabitation.

I believe in love. Taking-out-the-garbage love. Grocery-shopping-together love. Don’t-speak-until-I’ve-had-coffee-in-the-morning love. There are many who believe an institution, marriage, in this case, is of more value than the people within it, but what use is a crusty shell of a social structure if it doesn’t benefit those who want to occupy it?

Personally, marriage for me is being with the man I love. I’m just lucky I happen to be straight, so the world doesn’t give me huge grief about it. Being a part of the institution means people will view you differently once you sign on the dotted line, but if you change the way you look at each other, you’re in trouble, my friend. I get that not everyone shelters under its umbrella for love. People, Wikipedia informs us, marry for “legal, social, libidinal, emotional, financial, spiritual, and religious reasons.” For several of us, marriage is security, a stable way of life where we can moor our boat as we pursue milestones. But for some, believe it or not, it is about sharing a life with just this one person, not one picked from among a line-up of suitable matches or socially compatible suitors.

Who owns marriage? Who sits on its board? Who drafts its rules and guidelines in an imaginary general body meeting of all who said “I do”?

If you don’t want to expose your children, born of your old-school union, to an evolving zeitgeist, there’s always contraception—because millions of same-sex couples in this country (or anywhere on the planet, for that matter) shouldn’t have to be second class citizens just so you don’t have to answer a child’s curious questions.

Marriage is the sharing of life and heart and people; the His and Hers relegated to embroidered towels. I believe in compatibility. And companionship. And yes, a degree of compromise. But when that extends to changing who you are deep inside, it is detrimental to society. Unhappy, unfulfilled citizens don’t contribute much to the world.

Whatever be your reasons for marriage—and I am not naïve enough to believe they’re always about love—know this: we are merely minions of a cooperative movement who like to believe our choices should be socially or religiously validated. Well, news flash: the time for egalitarian existence is upon us—at least to the extent we can make it happen. There are many things about our planet that are unfair and/or unequal; a framework of laws doesn’t have to be one of them.

On November 3, 2011, the Defense of Marriage Act bill (DOMA, enacted in 1996) was debated in Congress. During the debate, Senator Feinstein noted that DOMA denies same-sex couples more than 1,100 federal rights and benefits that are provided to all other legally married couples: rights to Social Security spousal benefits, protection from estate taxes when a spouse passes away, and the ability to file taxes jointly and claim certain deductions. On June 27, 2013, Section 3 of the DOMA was decreed unconstitutional by the United States Supreme Court, allowing people of all sexual orientations to equally choose to be bound in matrimony.

Who knows, the institution may be redundant in a few decades and the need to partake invalidated, but as long as someone’s left out, they’ll want in, so let them reap the social and economic benefits, and in this age of individualism, may we go back to the very first building block: the human being, and the very first step: inclusion.

Dilnavaz Bamboat manages communications and social media for a Silicon Valley nonprofit and is a scriptwriter for iPad applications for children, a writer and editor at IDEX (idex.org), a section editor at Ultra Violet (ultraviolet.in), a feminist blogger at Women’s Web (womensweb.in) and a founder member of India Helps (indiahelps.blogspot.com). Source: India Currents.