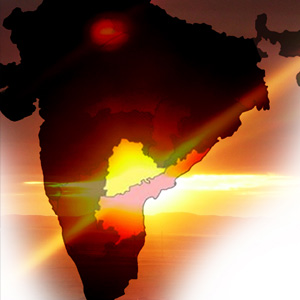 As political reformer and Lok Satta founder Dr. Jayaprakash Narayan told Khabar, the formation of Telangana—a new state to be carved out from Andhra Pradesh—is neither the disaster its critics think it will be nor the panacea that its supporters claim it is. It can work only if all stakeholders work together. But can we hope to see that happening in today’s India?

After years of dilly-dallying, the Congress-led UPA government has finally expressed its consent to the creation of India’s 29th state—Telangana. The announcement sparked instant protests across the coastal Seemandhra region to keep the state united, while spurring old demands for separate states elsewhere in the country. As Telangana supporters express jubilation over the announcement, the activists opposing the move criticize it as a case of the Congress party exploiting subregionalism in order to reap political benefits.

When India gained independence in 1947, more than 500 princely states were merged into 14 large and heterogeneous administrative units. Jawaharlal Nehru, India’s first prime minister, had hoped such composite states would discourage the emergence of parochial identities. And given the trauma of India’s partition, he didn’t embrace the idea of linguistic states—although Congress resolutions dating back to the 1920s did favor the creation of such states. But Nehru had to concede after Potti Sreeramulu—who fasted for more than 50 days demanding a separate Telugu-speaking Andhra from the Madras state—died in 1952, triggering mass protests.

“The historical parallels cannot be more striking,” says K. Srinivas, the editor of Andhra Jyothy, a leading Telugu newspaper. “The reasons Andhra leaders wanted to get separated from the Madras state then are exactly the same reasons why Telangana wants to be separate now: better political representation, better job opportunities, and better agricultural and water resources.” When the underdeveloped Telangana region merged with the Andhra state, a ‘gentlemen’s agreement’ was drafted in 1956 to safeguard Telangana’s interests in the new state. However, key aspects of this agreement were never implemented, and even after 60 years “Telangana has lower per capita income, lower access to employment, lower business opportunities, and low access to education,” according to the Sri Krishna commission. “The continuing demand for a separate Telangana is not entirely unjustified,” the committee felt.

But dividing larger states does not automatically guarantee development. Critics point to the conflicts between existing states for water and other resources, which could only be quadrupled with further divisions, possibly leading to civil strife.

The status of Hyderabad, home to many major information technology and pharmaceutical companies, has already become a bone of contention between the two regions. The current proposal says the city will be the joint capital of the two states for a period of 10 years, during which time the center will help develop a new capital for Seemandhra. Many find this arrangement unacceptable. Actor-turned-politician Chiranjeevi, voicing the sentiment of the region, demanded that Hyderabad should be made a union territory or the permanent joint capital of both the states.

Critics further point out that the decision on Telangana has reignited the demand for other states—like Bodoland, Gorkhaland, and Vidharbha—which could threaten the nation’s unity.

The enigma of a heterogeneous India staying intact and flourishing as a vibrant democracy, despite widespread cynicism, can perhaps be explained by how India recognizes diversities and explicitly nurtures larger polity- level loyalties, including caste, religion, language, and subregional identities. This should be considered Indian democracy’s strength, not weakness.

Crisis demands statesmanship. Leaders who command respect can make tougher choices that serve the long-term interests of a nation. However, former civil servant Jayaprakash Narayan, who founded the Lok Satta Party, thinks the crisis of leadership in India is a far more dangerous threat than the current turmoil over state formation. “Unlike during the freedom struggle, the best minds and hearts have shunned politics and the vacuum is filled mostly by those who converted politics into commerce,” he says, adding, “We deserve better politics and ethical leadership.”

Let’s hope a stronger and saner leadership emerges from the crisis over Telangana to pull the country towards a new dawn of better governance.

Suresh Kolichala, a systems architect at Cisco Systems Inc. in Atlanta, is the cofounder and former editor of a Telugu webzine (www.eemaata.com).