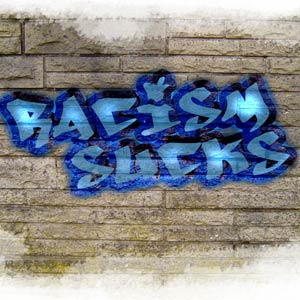 How do we deal with cultural insensitivity?

Last week, I was at a Notary Public office, getting some papers signed to send to my mother in India. I had taken a couple of witnesses with me—my friend Prema and my husband. A woman came into the office and engaged in some banter with the notary for a few minutes. They appeared to be friends or sisters and the exchange had an argumentative edge to it. The banter subsided as the notary started to work with me, and the woman decided to make small talk with my introverted husband, starting by complimenting his clothes. I could see she’d crossed a boundary with him and invaded his space, but it was not my priority at the moment.

As I was explaining to the notary that I was re-doing the paperwork because the Indian bureaucracy had not approved of some small detail, her friend chimed in that we should have put in $20 in an envelope if it was for India, and that would have solved everything. A bribe, in other words.

I continued to focus on the notary, but out of the corner of my eye, I saw my husband whip around and say to her, “That is quite offensive.” I flinched slightly, but I could see his point. The woman responded with a surprising, “Yes, it is.” (In retrospect, I think she thought the idea of having to pay a bribe was offensive, not her comment!) Then the conversation became white noise in the background as I focused on the paperwork and said my goodbyes to the two women.

As we walked out, my husband said, “I cannot believe you were so nice to that woman! I wanted to cut off all conversation with her and there you were, happily saying goodbye as if nothing had happened.” Apparently, I’d missed the part where the woman had gone on to say, “This is a huge problem over there (in India). We do things differently here. They really need to fix it.” My husband couldn’t believe that she could call an entire country of people corrupt, when there were two Indians in the room who were not. And there was something about the distancing and dismissive “they” who needed to fix things unlike “us” who are seemingly perfect here, that really irked him.

I’ve been thinking about this conversation all week. Did my husband overreact?

Did I underreact? The thing is … although there are times when I might be offended and simply do not find the nerve to speak up, this was not one of them. No doubt I thought it was the truth. After all, if another Indian had said it to me, we would’ve ruefully shaken our heads together about the palm-greasing that moves things in India. Even the Broadway hit (Avenue Q) pays a playful tribute with the song, “Everyone’s A Little Bit Racist”:

Ethnic jokes might be uncouth,
But you laugh because they’re based on truth.
Don’t take them as personal attacks.
Everyone enjoys them—So relax!

Perhaps I was trying to allow her that gaffe, given that I felt bad for largely ignoring her while I was working with the notary, even though the woman had been rude in the first place to interject herself into a business conversation that did not concern her. Whatever my reason maybe I was supposed to have been as offended as my husband was.

Oh, did I mention that my husband is not Indian?

A few years ago, I took a class with a professor who went to great lengths to explain white privilege. As a white man, he continues to struggle with it and he is very focused on teaching people to recognize the subtleties of privilege imbued in the dominant culture. At the time, I argued with him that I had seldom, in my 30 years in this country, felt the ugly glare of discrimination.

My experiences were in graduate school and the Silicon Valley workforce—not your typical place to call out my race or country of origin. I have Indian friends who would disagree. However, I told him, when I think someone is being unpleasant to me, I simply attribute the attitude to their having a bad day and it having nothing to do with me. Or maybe growing up in India as part of the dominant culture (with the privilege of education, and an unspoken understanding of what an upper caste assignment entails), gives me a certain immunity even when transplanted into another culture. The professor did not say much, but I’m fairly sure he thought I was being blind or passive.

I have not felt the need to defend India or my Indianness to anyone (except other Indians who accuse me of not being Indian enough because I don’t love the spiciest of spicy foods or wrapping six yards of sari around my small frame). And yet, my husband seems to see things and stand up for things I do not feel the need to defend. I suspect subtle racism is there all the time. I don’t necessarily mean overt acts of hostility, but stereotyping, and assumptions, based on one’s life experiences, are par for the course.

When my daughter was a toddler, she was at Macy’s with my husband, laughingly pushing her stroller up against his legs as he paid at the counter. The saleswoman snapped, “Ugh, wonder where the child’s mother is! I’m so sorry.” My husband replied that it was all right, and he was the child’s father. The woman responded, “No, you’re not.” Granted, my genes won in this case and there is not a trace of German in that beautiful little being I call my child, but my husband, shocked, and not knowing whether to laugh or be insulted, repeated that he was the dad. The woman retreated quickly with, “Oh, she just looks so exotic … ” Nice save, lady, but not enough. Calling my child exotic did not negate all the insinuations of the previous five minutes.

I say this now, 15 years after the event. And yet … I was absent at the time, but I know that if I had been there, I would not have reacted to that situation either. I might’ve cringed internally at her tone, but I would not have taken it into the broader realm of the distinctions between “us” and “them” that was probably the undercurrent of that conversation. No, I would’ve smiled and said “thanks.”

So what is my point? The event last week made me look again at the delicacy of the boundaries of what is acceptable to say and by whom. I don’t often see discriminatory behavior until someone points it out to me. I wonder if I have thicker skin than most or if it is my reluctance to confront anyone because I don’t want to be thought of as hypersensitive or having a chip on my shoulder. Or is it that piece of middle-class educated India that taught me that dignity meant being polite, brushing off insults, and holding my head up high?

I believe earnestly in what Kofi Annan had to say on the subject: “Our mission … is to confront ignorance with knowledge, bigotry with tolerance, and isolation with the outstretched hand of generosity.” There is nothing there about being offended and reacting with anger. Still, encounters like the one we had last week nag at me as I get older, and it is unsettling. It’s not that I have suddenly discovered the existence of subtle insults; it’s deciphering my responsibility when I am faced with them. I now carry that dubious label of “mature with life experience” so it might be my lot to educate, as my husband attempted to do. Then there is role modeling to consider, as I wonder if my kids view my conciliatory ways as classy and dignified, or lacking in assertiveness. Unlike my old self of 20 years ago, I could not even be annoyed with my husband last week for what I would have called “making a scene” in public. Age, wisdom, and my children’s experiences growing up as first generation Americans have made me zoom in on nuances I used to miss.

I need bifocals these days, and yet, in another sense, it’s as if a little windshield wiper went across my eyes and brought some things startlingly close. Blindness, clouded vision, or passivity—call it what you will, it was a comfortable and comforting place to be. But tendrils of discomfort and irritation are curling around me, because when I am forced to look at the subtle yet complex nature of cultural and racial denigration, I have to make choices about how to deal with it. It’s like having had a cataract operation I did not want. Ironic … since my husband is an optometrist!

Gayatri Subramaniam is a San Jose-based instructional designer and writer. She is an ardent tennis fan who believes that if she had only been taller, stronger, faster, and blessed with more talent, she would’ve been a Grand Slam champion.