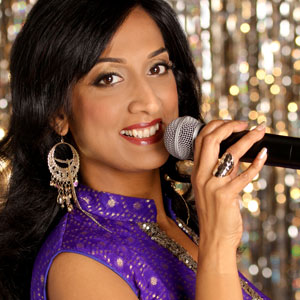 You are born in a family of trained Carnatic singers. You are also blessed with a voice that has a range from soft and sultry to energetic and resonant. How long will you remain confined in a cubicle programming software? Or singing casually at parties? Not long, as Atlanta singer Rekha Pallath shows.

With her interests in dancing and stand-up comedy, along with her singing, Rekha appears cut out to be more of an entertainer than a software engineer. However, says Rekha, “I like to do both software and pursue music and art, as it fills my life in all dimensions. It helps me keep life in balance.”

That balance is important for this mother of a high school senior, who seeks to inspire other women also juggling a professional career with being a mother and a wife. Because, let’s face it, despite her natural talents and family background in music, it would have been easy enough to get sucked into the responsibilities of being a suburban American multitasking mother, to let her singing become no more than a hobby. “I would like to inspire married women to pursue their dreams and do what they love to do,” she says. “Being married with kids does not mean the end of a woman’s aspirations. With the support and backing from her family, she can achieve all that she wants, and live life to the fullest.”

Rekha, who grew up in Mumbai and lived there until she moved to the U.S. with her husband, credits her love of the visual and performing arts to her upbringing. “My childhood was rich with activities such as sketching, painting, Bharatanatyam dance, singing, debating. My mother was my first music teacher who instilled in me the appreciation of art and music. My Grandma (Naani) was a very good harmonium player, and she always created an atmosphere of music in the house. She would take me to good dance and music performances and would speak about the nuances of Indian classical music.”

Rekha says she has been singing from as far back in her childhood as she can recall. Her mother ensured that she got proper training in Carnatic music. Since music was an integral part of her family, the goal of her classical training was never necessarily a career in music. “It was simply a medium to connect spiritually with the divine,” she says. 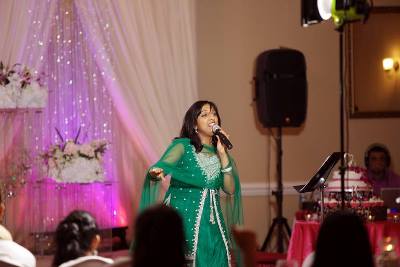 Entertaining audiences in Atlanta. The multilingual and versatile singer frequently performs at nonprofit and other events.

Besides her childhood training, Rekha in recent years has continued to polish her singing with lessons from the Pandit Jasraj School of Music and the Shankar Mahadevan Academy. She has also received Western voice coaching from renowned vocal coach Tricia Grey.

Academically, Rekha started out in architecture. “It’s a perfect blend of art and science,” says Rekha who worked in India as an architect. Then, “during the late 90s, software was picking up and I was fascinated by its potential. That’s when I started learning programming. I moved to the U.S. and since then I have been working in software.”

Meanwhile music, and particularly singing, had remained a constant in the background. At 17, Rekha was accomplished enough to become a finalist in a contest called “Close up Sangeet Muqabala.” While she did not win, it was the remarks of ghazal samrat, the late Jagjit Singh, one of the judges of the contest, that inspired her to never give up on her singing: “This girl has a very good voice. Please tell her that she should keep singing!”

And keep singing she has. Rekha is popular in the Atlanta Indian pop music fraternity. Being multilingual makes her quite versatile: she sings in Hindi, English, Kannada, Marathi, Gujarati, Telugu, Tamil, Bengali, Punjabi, and Sindhi, and has performed at various charity shows organized by IACA, Ekal Vidyalaya, Raksha, Senior Citizens, and others. 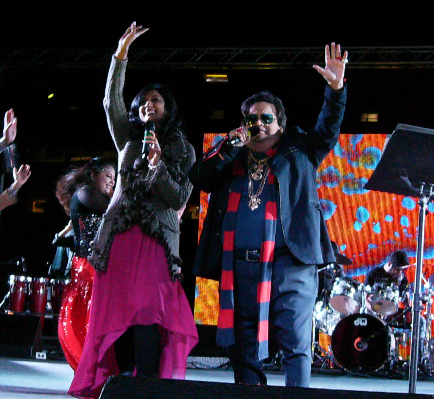 It is this popularity that led Mustafa Ajmeri, the well-connected rainmaker in Indian show business, to recommend her when Bappi Lahiri recently sought a female vocalist to accompany him in his live show in Dallas. Rekha now proudly claims the milestone of having sung live with this veteran but evergreen musician of the Indian screen. The accomplishment came on the heels of another credit: Veer Samarth, the Kannada composer, picked Rekha as playback singer for the lead character in the film Software Ganda (Software Husband).

While she seems set to go places with her singing, Rekha is not simply depending on lucky breaks, but is actively pursuing her passion. “Singer-songwriter” has an appealing ring to it, and this wordsmith is just that for her new album, Nasha (“Intoxication”). Explaining her bent for words, she says, “I am always researching and writing new material for comedy in my shows. I also write poetry. I have written all the songs for Nasha. I express my thoughts and sentiments through my poetry and songs.” She hopes to complete this album by the end of 2015.

When asked if there is a particular genre of music she likes to sing, Rekha offers, “I don’t differentiate in music. Whether it is Bollywood, Indian classical, Western, African, I welcome it all! I get energy, inspiration, insights from all forms of music. To me there are no boundaries in music. Just as there are countless species of flowers in this world, in music, too, there is infinite number of compositions and each has its beauty. I just keep an open mind and let divinity show me the way!”

She’s quick to credit the support she gets at home for her ability to perform and take on projects.  “My husband is my biggest supporter. He is very passionate about music and sings, too. He listens like a true friend and advises me like a mentor. When my music schedule gets challenging, he helps out at the home front. He is truly ‘the wind beneath my wings’!” Her son, the high school senior, is also equally supportive. “When I needed to go to Bangalore for a while for film-related work, I asked our son if he would be okay, to which he patted my back and said, ‘Mom, go follow your dreams!’“

Not only is Rekha following her dreams, she’s also inspiring others like her to pursue passions they thought they’d have to leave behind in the rigors of balancing work, home, and family. “To be able to sing in an Indian movie while being based in the U.S. has been a tough feat for me, but I could achieve this milestone because I believed in myself and never gave up on my dream. No matter what age one is, there is so much to discover about oneself and the world. In that process of discovery, lies the excitement of life.”

Here are two of Rekha’s original song compositions from her album Nasha—a work that is still in progress, and expected to be completed by the end of 2015.

Henna (https://www.youtube.com/watch?v=cJLzIgixOTQ)
“Henna is very close to my heart,” says Rekha. “It is my story: about my struggle with being a dark-skinned girl child in India. Indian society always wants a girl to be light-skinned and doesn’t look at the qualities a person possesses. If you see, henna is dark and earthy, and with its color and fragrance it beautifies every palm. With Henna I wanted to assert that dark is beautiful!”

Besabara sajna mera (https://www.youtube.com/watch?v=8eIAC9UTFFw)
“This love duet is based on raga Pantuvaraali,” says Rekha. “I chose this exotic raga because I wanted to create a song which is based in classical notes but is presented in a modern format.”