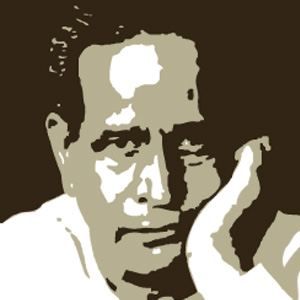 For a generation of music lovers, the deeply resonant, soul-stirring voice of Pandit Bhimsen Joshi came to stand for the best in Hindustani classical music. The voice that enthralled millions was stilled when he passed away at the age of 89 in Pune, India, recently. SHUCHITA RAO remembers the life of the great master, who was awarded the Bharat Ratna (Jewel of India) in 2008.

I was a little girl when I watched Pandit Bhimsen Joshi perform in Hyderabad, India. He was singing a thumri—” Sajan tum kaahe neha lagaaye”—in Raga Tilang. The expression on his face reflected intense longing, his body leaned to a side, and his hand was drawn up in the air as if he were trying to catch hold of an imaginary object drifting towards him. I remember being intrigued by the vigor and force of the superfast taans spinning out in quick succession, like multiple streams of water shooting up from a fountainhead striving to reach higher and higher into the air. It was clear that Pandit Bhimsen Joshi presented his music with a great amount of emotional involvement. Spontaneity marked his singing style and his soaring imagination seemed to take root in feelings emanating deep within his heart and soul. I wondered, “What went into the making of such a musician?”

Pandit Bhimsen Joshi was born in 1922 in Gadag, Karnataka, into a family where music was not a family tradition. As a young boy, he was so drawn to Ustad Abdul Karim Khan’s music that he ran away from home at the age of eleven, when his family did not support his aim to take up singing as a profession. It was undoubtedly his quest for music that took him away from home, but Bhimsenji recalls a funnier reason in the documentary Gulzar made about his life—his mother wouldn’t serve him an extra spoon of ghee one day at lunch, and young Bhimsen stormed out in a fit of anger, and ran away from home!

In a video interview for a documentary by Gulzar, Bhimsenji narrates fascinating incidents from this time of his life—of travelling on trains without tickets, singing popular recordings for the ticket collectors who were often music lovers, who would let him ride free. His quest for learning music took him to Gwalior, Lucknow, Rampur, Calcutta, Punjab, and finally to Kundgol in Karnataka where he became a disciple of Rambhau Kundgolkar alias Sawai Gandharva, who was one of the chief disciples of the legendary Ustad Abdul Karim Khan, founder of the Kirana gharana of music. His family happily accepted him back at that point and his father began to support his deep passion for music.

Sawai Gandharva taught Bhimsenji for five years in the guru-shishya style, teaching him vocal music in the style of the Kirana school. Under him, Bhimsenji learned three main ragas, namely Todi, Multani, and Pooriya. He practiced ten to twelve hours a day at a stretch and mastered the nuances of the Kirana style of gaayaki (vocal singing). At the end of his training, he set out on a musical journey that enriched his style through the influences of other gharanas such as Agra, Gwalior and Jaipur-Atrauli. In a CD recording of one of his live performances, Bhimsenji says that he was deeply influenced by the contemplative music of Ustad Amir Khan. A contemplative style is indeed reflected in Bhimsenji’s khyaal music CD recordings of ragas such as Darbaari and Shuddh Kalyaan.

Although he was receptive to so many influences outside his gharana, Bhimsen Joshi took pride in celebrating the legacy of his Kirana guru. In honor of Sawai Gandharva, he began organizing the Sawai Gandharva Music Festival annually in Pune in the early 1950s. To this day, the four-day, open-air festival held every December brings the biggest names in Hindustani classical music to perform for thousands of enthusiastic music lovers.

Bhimsenji himself was a kind and patient teacher, nurturing the talent of several disciples. Pandit Madhav Gudi, Pandit Vinayak Torvi, Pandit Shrikant Deshpande, Anand Bhate, his son Shrinivas Joshi and many other disciples show the unmistakable stamp of their guru’s energy and majestic style of singing.

What made his music unique?

Bhimsen Joshi’s deep, sonorous voice and extraordinary range stood out as his most attractive qualities. His music also reflected supreme command over swara (note) and laya (tempo). His slow, spacious, step-by-step, emotional unfolding of raga in the form of alaaps always created a soothing effect on the mind. His vigorous rendition of involved and intricate taans was unique. These qualities were the result of grooming under Sawai Gandharva, who had a reputation for being a demanding guru and a tough taskmaster.

His music was marked by a versatility not commonly seen in the other greats of his generation. In addition to khyaal singing, Bhimsenji was adept at singing thumris, taraanas, abhangs and natyageet,bhajans by Bhakti poets such as Tulsidas, as well as devotional Kannada songs like devaranamas composed by Purandara Dasa and and other Dasa poets. Shridhar Kulkarni of Ashland, Massachusetts, says, “ Bhimsen Joshi was a household name in Karnataka, especially in northern Karnataka, where Hindustani classical music is prominent. It was very common to hear his bhajan cassettes played not only in the temples of Hubli and Dharwad in the morning hours but in restaurants, barber shops and grocery shops.”

Pallavi Nagesha of Boston says, “Dasa kritis and Bhimsen Joshi were synonymous to us. We rarely heard Purandara Dasa compositions rendered by anyone else. It was almost as if the tinkling bells of Goddess Lakshmi’s feet would never touch your threshold if she did not hear Panditji voice welcoming her in!”

Bhimsenji’s participation with other musicians, sportsmen and actors in a Doordarshan video titled “Mile Sur Mera Tumhara,” based on the theme of national integration, brought him closer to the masses. The video showed the musicians and other stars singing against the backdrop of scenic locales from different parts of India, and was telecast frequently. He also sang for a few movies, such as the Hindi films Ankahee and Tansen, and the Kannada movie Sandhya Raga. He recorded dozens of ragas for HMV, Music Today and Magnasound. HMV awarded him a platinum disc in 1985.

The virtuoso often sang, at the crack of dawn, a bhajan in Raga Bhairavi as a concluding item in all-night concerts. My father recounts to this day the feeling of being elevated into the realm of spiritual space when he heard the powerful lyrics by poet Brahmanand—”Jo bhaje Hari ko sadaa, wohi param sukh paayega”—being infused with pure classical music. Bhimsenji’s connection with his heart when he poured his music out through his deep and powerful voice was mesmerizing. It clearly made its way into the hearts of listeners.

“A timeless performer” – words from his peers and disciples

Understandably, many contemporary musicians feel a sense of loss at his passing. Dr. Prabha Atre, the reputed vocalist, remarks, “I belong to the Kirana gharana to which Panditji belonged. His death has orphaned us. He was a timeless performer, and his death is not just a loss to our country, but a universal loss. He was a Vishwaratna (jewel of the world), not just Bharat Ratna.”

Bangalore-based Pandit Vinayak Torvi said, “I was lucky to receive lessons from him. My association with him was for about thirty years, which was a golden period for me. I trained for ten years with him and also accompanied him during concerts. He was one musician who ruled the world of music for more than five decades. His music rises above the boundaries of gharanas. It is a ‘Bhimseni Gharana.’ His notes, thoughts, music were very difficult to copy or learn. His music would touch the heart so deep as it would transcend the listener to the world of ‘Anahata Naada’ (an all- pervasive sound that cannot be heard). The most special thing about his music is that it had the capacity to attract everyone—wise people (gunijan), teachers (gurujan), music connoisseurs (rasikas), children, the learned audience and the layman alike. The most adorable quality of his personality was his simplicity. He had no special requirements, no special shirts, and he ate simple food. In spite of being an artist par excellence he remained simple. Another quality was his affection to his co-artists and students. He always respected and loved all. He is a legend and an incarnation of music. I can only say that my Guruji can never be “late” (Divangat); he is there in the hearts of millions of music lovers and will remain there till eternity.”

Pandit Bhimsen Joshi was a musician’s musician. He aspired early in life to become a musician and followed his dream to perfection. He became a role model for scores of aspiring classical musicians. His demise will leave a deep void in the world of Hindustani vocal music that will be very hard to fill.