Scrape, Pillage, and Plunder: The Story of Appalachia 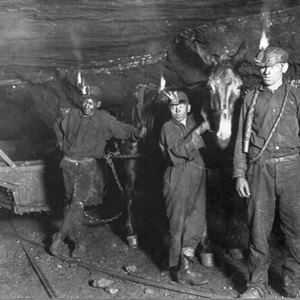 The Story of Appalachia ... is the story of a land that epitomized poverty in America, and the circumstances that gave rise to workers’ unions.

In 1993, my former college roommate and I bicycled from Bellingham, Washington to New Bern, North Carolina. In advance of the trip, we tried to figure a way to avoid cycling through the poverty stricken lands of eastern Kentucky but could find no viable options. “Maybe it won’t be so bad,” I said to Dave, but it was.

When we arrived in the rugged land, the cheerful waves and “God bless you” sentiments that had been our constant companion for 2000 miles were gone. No one gave a tinker’s damn about two exhausted men, but cold shoulders were minor irritants compared to the region’s endless supply of unchained, trained-to-attack dogs. When we were most vulnerable, such as when our speeds slowed on uphill climbs, the dogs would sneak up on us from behind and try to rip the flesh off our unprotected legs. I damned every two-toothed person in sight, their friggin’ dogs, rusted homes, and hopeless land.

In this, the month we celebrate Labor Day, I wish to share the story of eastern Kentucky, an area that was at the epicenter of President Lyndon B. Johnson’s 1965 “War on Poverty.” The program failed but at least the intention was honorable, which is more than what we can say about the other “outsiders” that impacted the area, including businesses and labor unions.

The Appalachians were settled by Scots-Irish immigrants, a clannish sort of people who never looked to others for help. Poor in wealth by Washington D.C. standards, sure, but some locals, like the author Harriette Simpson Arnow, never saw it that way:

When I went out to teach in 1926 there were hundreds of roadless creek valleys all through the Southern Appalachians, and almost no roads at all in Eastern Kentucky… The best homes were usually the older log houses, and around those log houses there were many pleasant things including much that was beautiful; for those who like open fires, children, human talk and song instead of TV and radio, the wisdom of the old who had seen all life from birth to death, none of it hidden behind institutional walls, there was a richness of human life and dignity seldom found in the United States today.

But in terms of formal education, most people in eastern Kentucky could neither read nor write, did not know that huge deposits of coal worth hundreds of millions of dollars was on their land. One hundred years ago, coal companies ruthlessly exploited the land and the people. Jean Ritchie, a songwriter, who was born in 1922, recalls,

For my Grandpa Hall, it was an unwitting sin. He, along with most of his neighbors, sold the mineral rights to his land to the friendly, likable man who said he represented a company that thought there might be a little coal on our land worth getting out. The company was willing to take a big chance and pay Grandpa 50 cents an acre, and since Grandpa had more than a thousand acres, this amounted to around $500.00, a handsome sum in those days. For a man with a dozen children, it was also impossible to refuse.

As Mike Clark, once an Appalachian Program Director notes, as soon as grandpa signed the papers about “a little coal,” the huge bulldozers moved in and the strip mining began.

Strip mining began on a large scale around 1961 in East Kentucky. By 1964 large areas of Pike, Knott, Harlan and Lechter Counties had been gutted…As months passed it became clear that the only farms saved from strip mining were places where small landowners, family, and friends were willing to physically stop the stripping machines. Almost without exception the courts backed the coal companies, not the small landowners.

Oh, never mind the land, here is what happened to the people, as written by Jim Hamilton, a disabled coal miner:

We was bern’ told to do whatever the company and bosses told us to do, regardless of what hardships it was—goin’ in water holes and standin’ in water to our knees to load coal. I’ve come home many a night in the wintertime, way after dark, come in with my clothes froze so stiff they would stand up. They’d done eat supper and all gone to bed and my old mother’d hear me go by and she’d say, There’s poor little Jim—listen to his clothes rub together froze stiff. If you’d forget and pull your cap off too quick, it would pull your hair out—be frozen to your hair. It was just a way of making people be slaves, because they had to do that to live. But we done it, didn’t we, brother Jake?

The late 1800s and early 1900s—the prime decades of our Industrial Revolution—was a period of great social change, as we morphed from a mostly rural country to one with bustling cities and busy factories. But amidst the general prosperity, there were costs. In the absence of government regulation, toxic wastes poured into our lakes and rivers. The “human condition” wasn’t much better. When Reinhold Niebuhr, a minister, toured a Detroit factory in the 1920s, he wrote,

The foundry interested me particularly. The heat was terrific. The men seemed weary. Here manual labor is a drudgery and toil is slavery. The men cannot possibly find any satisfaction in their work. They simply work to make a living… We are all responsible. We all want the things which the factory produces and none of us is sensitive enough to care how much in human values the efficiency of the modern factory costs.

During this era, a few national labor unions formed, but it would take decades for competing factions within the labor movement to form their unions, fend off rivals, and attract members. Notwithstanding some tumultuous history—including links to the Mafia and organized crime—labor unions became an established part of American life, with their membership reaching 33% of our nation’s workforce in the 1950s. Heroes appeared, such as the remarkable Caesar Chavez.

In 1962, Chavez co-founded the United Farm Workers (UFW), a labor union that focused on the rights of California’s migrant workers. A few years later, Chavez organized a march to the capital, Sacramento, to fight for better wages. The strike lasted five years and was ultimately successful. Chavez, influenced by his own Catholic tradition and the life of Mahatma Gandhi, often fasted to promote the principle of nonviolence.

In 1970, I turned on the national news to learn that this person named Joseph Yablonski, his wife, and his daughter had been murdered in their beds. The popular Mr. Yablonski had run against Boyle in the union’s presidential election, but lost. Yablonski and the miners, confident that the voting counts were rigged, asked the Department of Labor to investigate. Three weeks after the request, the Yablonski family was murdered.

In early March 1971, Tony Boyle was indicted for embezzling $ 49,250 in union funds. In 1974, he was convicted of ordering the murders, sentenced to three consecutive terms of life in prison.

Today, only 10% of America’s workers are unionized, a huge decrease from the 33% of the 1950s. Some trace the decline to the anti-union and pro-business presidency of Ronald Reagan in the 1980s, but that is sheer nonsense. Let’s start in the 1970s, when American consumers shunned the expensive, gas-guzzling, poor quality, business-as-usual cars made in highly-unionized Detroit, for millions of the low cost, fuel-efficient, high quality cars from Japan. Due to globalization and loosened import restrictions, Chrysler, General Motors, and Ford no longer held their virtual monopolies. Today, American consumers have many more choices, including cars from Japan, Korea, and Germany, a good portion of which are now either manufactured or assembled in the anti-union American South.

According to various studies, there has been economic improvement in many parts of Appalachia. But according to ABC News, roughly 40 percent of Appalachia's population in the hills and hollows remains stuck in poverty, still searching for the road to success. Their history has been rough, full of “outsiders” who exploited the land and people. It is not at all surprising that twenty years ago they did not wave at two men on their bicycles, and I don’t hold that against them, anymore.