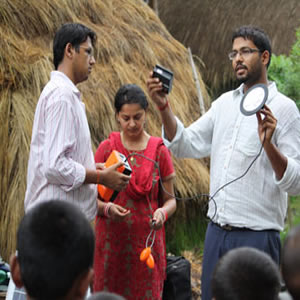 In the Jaju family compound, behind two green gates off D.L. Khan Road in South Calcutta, 26-year-old Vinay Jaju is trying to change India. He has chosen to begin in the South 24 Paraganas district of West Bengal.

“We have set up alternative energy centers in Ullon and Ram Ganga through our company, ONergy. We are starting with 25 families in each community who have agreed to replace their government-subsidized kerosene lamps with the LED solar lamps we are selling. The kerosene lamps are not only bad ecologically but provide extremely poor lighting. The LED lamps can be purchased for as little as 600 rupees, and paid for in installments over time.”

In the near future, ONergy hopes to begin selling solar cookers run with biogas, so women won’t have to choke on smoke as they now do when cooking on their wood and agro-waste stoves. Through its “Smokeless Village Project,” Onergy also plans to provide electricity to people in rural areas who have never before had electricity. Rice husks, gasified by generators, will be brought to homes through installed wires.

Tall, laid-back, and prone to deadpan, put-on humor, Jaju, a former accountant in the Calcutta office of General Electric, does not look like a man given to excesses (he is in fact strongly pragmatic for the most part.) But in January of 2009, he embarked on an 800-mile bicycle pilgrimage from Calcutta to New Delhi that he called the Climate Ride. The journey took him through the coal mining regions of West Bengal and Jharkhand.

“I had just come back from spending a year in Australia,” he said. “Getting involved with the Climate Action Group and Greenpeace there had made an environmental activist out of me. I came back with the idealistic notion of no coal. When I cycled through the coal belt with my Dutch friend, Huub, I challenged people as to why we were building our infrastructure using coal.”

The Climate Ride press release reminded Indians that coal was responsible for two-thirds of the carbon dioxide emissions in India. It pointed out: “India has very poor extractable coal reserves left for 30 or 40 years,” and warned that the Indian government had approved the building of 213 new coal plants over the next eight years. Why new coal, despite our awareness about how damaging coal was to people’s health and the environment, the young environmentalists asked. But predictably, Jaju met with resistance to his absolutist approach and found he had to moderate it.

“People didn’t take us seriously when we said, ‘absolutely no coal.’ They would ask what we proposed instead. They made me see that like it or not we live in a market-driven economy that can’t be changed overnight. Coal may be flawed, but in the short term, communities are dependent on it. India is dependent on it. Forty percent of India’s energy comes from coal. The alternative to coal, I realized, was in developing sustainable, affordable, renewable energy all over India.”

He made it a point to talk to as many miners as he could. Jaju is a good listener for a man of action, and what he heard surprised him. “I was expecting the miners to tell me how tough their lives were, but they emphasized that this was the life they were used to, it was fine with them, because they had been doing it for so long, because it was how they earned their daily bread. Working in the mines was like a religion to them. But they made me aware, seeing them breathing in coal fire smoke, of the burden they had to bear for us to enjoy the benefits of urban life.”

A believer in the seamless blending of ideals and lifestyles, Jaju, a diligent Gandhian, has chosen to live a life of old-fashioned Indian simplicity. He bathes with just half a bucket of water. He has pretty much stopped shopping and gets by on what he already has in drawers and closets. He no longer travels on planes.

And on the white-hot days of summer in Calcutta, when breathing turns into a labor-intensive necessity? What does he do then? “I turn on the AC for just a half hour. That’s it. I can’t tell people to change their lifestyles for the sake of the environment if I am not prepared to do it myself.” Jaju is sensitive to his being a young entrepreneur from the big city arriving in rural West Bengal with the purpose of getting poor people to embrace a new technology. “There is a lot of mistrust. These people have been cheated by outsiders before. They want to know, ‘Who is this guy?’ I have to go slow. I have to have them see with their own eyes that this project can work, that it’s affordable. The job of charging the solar batteries for the lamps is done by women entrepreneurs from their villages, people they know.”

On Jaju’s part, there are also risks involved. He is a businessman doing business with India’s rural poor. “There may be losses,” he concedes. The hundred or two hundred rupees a month villagers will be paying for their lamps is still higher than the fifty rupees they shell out for their kerosene lamps. But they will be saving money in the long run, when their lamps are paid for, and their only cost will be the modest expenditure for battery charging.

When addressing the ecological issue in political terms, Jaju likens the struggle to save the earth from catastrophe to India’s freedom struggle under Gandhi. Like Gandhi, he does not like what he sees when he looks to the West. “The ecological crisis we are in has been created by the Western countries. They would like to see the developing countries change the ways they degrade the environment, without changing their own ways. I think India should choose the path that is best for India.”

Jaju aims to expand his participation in that path beyond West Bengal. “In 10 years, we hope to have alternative energy centers operating all over India.”

[Robert Hirschfield is a New-York based freelance writer whose work has appeared in Outlook, Sojourners, Matador, and other publications.]