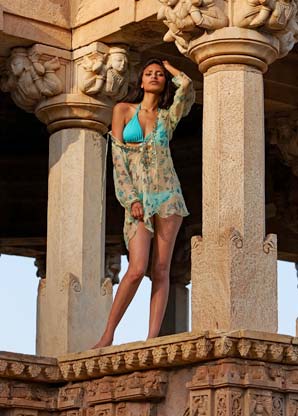 Sonia Dara, a Harvard sophomore and Atlanta native, has become the first Indian American to grace the pages of the top-selling Sports Illustrated swimsuit issue. An annual honor that has been won by the likes of Gisele Bundchen and Cindy Crawford is now Dara’s, as she shares the pages of the 2010 issue with supermodels such as Bar Refaeli and Brooklyn Decker. Dara is catwalking her way to the top while pursuing an economics degree at the prestigious Ivy League university.

Indians haven’t been known to feature on the covers of mainstream magazines, but following on the heels of supermodel and Top Chef host Padma Lakshmi, and the always-yearned-after Aishwarya Rai, Dara is sure to become a household name.

Dara spoke to Khabar about pursuing modeling, balancing it with her academic career, and what it was like to achieve two out of the few concrete goals she set for herself.

Can you tell me about the Sports Illustrated assignment? Where did the shoot take place?

The shoot was incredible!  We flew to Rajasthan, where my ancestors are originally from, in September last year, and I wore roughly 15 different swimsuits out of a rack of 700-plus.  I was really nervous, but the Sports Illustrated team made me feel very comfortable and never forced me to wear a swimsuit I felt uneasy about.  I have never worked with such a professional team—everything was very organized, from accommodations to which earrings I should wear. In short, it was a lifetime opportunity, made much more enjoyable because it allowed me to visit my home country of India.

At Harvard, you’re involved with the South Asian Association. How is that experience?

I have had an amazing experience at Harvard thus far, thanks to the organizations I am involved in and the friends I’ve made. Harvard’s South Asian Association is one of the largest clubs on campus, with over 200 members, including many of non-South Asian backgrounds.  I served as a Freshman Representative my first year, and then became Social Chair my first semester of sophomore year.  SAA is in charge of over 100 events each year, including one of the largest student-run cultural shows at Harvard, called Ghungroo.  I was an assistant producer of the twenty-fifth Ghungroo production my freshman year and helped coordinate a 250-plus-member show. My time in SAA was great, and I am really happy I got involved and remained in touch with my Indian roots.

How do you balance your academic life with a modeling career?

Most importantly, I have an incredible support system.  My family, my boyfriend, and my close friends always have my back, and I count on them whenever I feel overwhelmed.  Secondly, I make it a point to keep my modeling and academics completely separate.  At the moment, I'm taking time off from Harvard to pursue my modeling career full time in New York City.  I like to dedicate myself 100 percent to modeling when I’m in NYC, and 100 percent to school when I’m in Cambridge.

Our readers, I’m sure, would love to know about your background in Atlanta.

I grew up with my parents, Poornima and Prithipal Dara, and older sister, Jo, in Duluth, Georgia.  I attended Northview High School, and I graduated with the class of 2008.  My parents are still in Johns Creek and serve as my anchor in the South.  My sister is working in Dallas and she is getting married in August of this year.

How did you break into modeling? What part of it do you enjoy the most?

I attended a modeling competition (AMTC) when I was 15 years old, and was signed by Elite Atlanta, which is now called Factor. I wanted to start in my hometown because I was still young and very much focused on high school.  When I turned 16, I was scouted by an agent from Elite New York and signed a contract with them, as well.  I am currently with Elite NY, Factor Model Management in Atlanta and Chicago, and Nathalie Models in Paris.  I'm hoping to expand my horizons and sign with a few more international agencies this year.  As for SI, I received a call from Elite asking me to meet the editor of the swimsuit issue.  Expecting to be dismissed fairly quickly, I was surprised when we ended talking about Obama, the inauguration, Harvard, and my summer plans.  It was nice knowing that she wanted to know about me and my interests, and soon enough, I received a call confirming that I had been booked.

In terms of what I get out of modeling on a personal level, there are aspects of modeling that I enjoy lots, such as the traveling and working for talented designers.  Then there are the behind-the-scenes aspects that I could do without, like running around NYC in 19-degree weather trying to make it to 15 castings in five hours, or the countless hours spent standing on heels that defy the laws of physics. But overall, I definitely do enjoy it.  Otherwise, I wouldn't be in the industry!

Do you intend to pursue both modeling and academics after graduating from Harvard?

I have a few concrete goals for my time off from Harvard: first, to walk in a New York Fashion Week show; second, to walk in Paris Fashion Week; third, to book a hair campaign; fourth, to book a make-up campaign; and finally, to book an editorial in Vogue.  These are huge dreams, but nothing is impossible!  I already marked off my first two goals in February!  As for post-college, I'm not really sure how things will play out.  I'm hoping that with an economics degree from Harvard, I will be able to find a career that will allow me to combine elements from fashion with business.