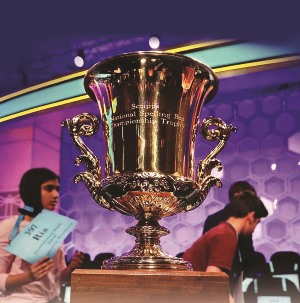 Six out of this year’s record eight champions in the Scripps National Spelling Bee competition had all used SpellPundit. Here’s how the Dasari family, creators of SpellPundit, have become a formidable force in the world of Bee champions.

Young South Asians have been dominating the Spelling Bees in the U.S. for over a decade, but this year they took it up another notch—they went mano a mano with the English language—and wrestled it to the ground. For the first time in the history of the Scripps National Spelling Bee, the competition seemed to run out of challenging words for the spelling bee wizzes and had to declare not one but eight co-champions—each of whom got the full prize of $50,000 each and the prestigious trophy. 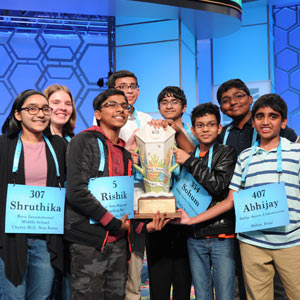 The eight co-champions were Abhijay Kodali, Christopher Serrao, Erin Howard, Rishik Gandhasri, Rohan Raja, Saketh Sundar, Shruthika Padhy, and Sohum Sukhatankar, winning with such tongue-twisters as erysipelas, aiguillette, and cernuous. They became the first group to actually share the championship in the 92 years of the Scripps National Spelling Bee.

The eight spellers competed during a suspenseful 20 rounds of competition. “This is a night to celebrate the remarkable academic achievement of a group of the world’s most talented spellers,” said Paige Kimble, executive director of the Scripps National Spelling Bee. “These spellers have conquered the dictionary unequivocally with their ability, skill, and command of the English language. It’s an incredible achievement, and we salute all the years of hard work and dedicated study that brought these intelligent young people to the world stage.”

So, who or what is SpellPundit, and what’s the secret sauce that it uses to conquer the 472,000 words in the English dictionary?

As the New York Times noted, “One of the “octochamps,” Sohum Sukhatankar, 13, of Dallas, said he had spent about 30 hours a week studying the 120,000 words SpellPundit had culled from the 472,000 words in the dictionary. For an annual subscription of $600, SpellPundit offers the massive list, which is sorted by difficulty levels and guarantees that it includes all words used in the competitions. Business took off after last year’s champion, Karthik Nemmani, gave a shout-out to the service. 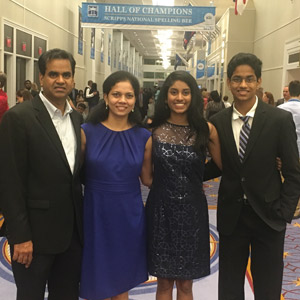 SpellPundit is not a mysterious guru or a wise scholar spewing out the words, but a grassroots startup created by an Indian-American family: two teens Shobha and Shourav are assisted by their parents Usha, a software engineer, and Ganesh Dasari, who is a scientist with ExxonMobil. In true spelling bee fashion the entire family has become a part of the endeavor.

The story of the Dasari family starts back in their hometown of Rajahmundry in Andhra Pradesh. Recalls Usha, “Rajahmundry is a city on the east shore of the river Godavari, the second largest river in India. The land is fertile, and agriculture and commerce are primary activities there. Education was the most important to my family as well as for community at large.”

She adds, “In this part of India, a child’s education is a primary topic of conversation when a group of parents meet. Parents’ conversations include what disciplines are ‘popular’ (which disciplines provide more job opportunities) and how to prepare to get into prestigious colleges. Parents, in general, prioritize their children’s education. It is a fair system, and a person who does well in education is recognized.”

Shobha and Shourav, growing up in Houston, quickly became part of the burgeoning Indian community, which participated in the American spelling bees. Shobha says, “I competed in my first spelling bee in second grade, where I misspelled the word dangerous!” After that there was no looking back, and in fourth grade she won her school and district spelling bees and advanced to the Houston Spelling Bee.

She was a semifinalist for three years running in the National Spelling Bee, placing 19th. She recalls, “The part of competing in spelling bees that I most enjoyed was meeting other spellers—I still keep in touch with many of my speller friends to this day—and learning about the world we live in through words.”

It seems to be a long-term commitment as Shobha, 18, still volunteers for spelling bees like North South Foundation, North American Spelling Champion Challenge, and Spelling Bee of China, actually visiting Beijing in the summer of 2017 to teach workshops to Chinese spellers.

Ask Usha how important these Asian spelling bees were, and she says they helped to keep spelling bee preparation alive throughout the year as the Scripps Spelling Bees run from November to May. By participating in the Asian events, the spelling bee is in continuous focus, even during the summer months. 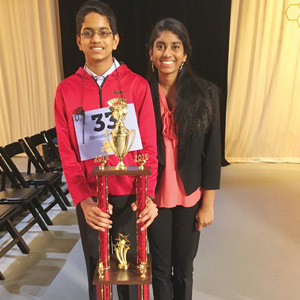 (Right) Siblings Shobha and Shourav are the
word wizards behind SpellPundit.

“These Asian spelling bees allowed Shobha and Shourav to calibrate their spelling skills with other spellers, as these competitions attracted talent from all over the U.S.,” says Usha. “These competitions also helped them master other skills, such as how to ask for information, and how to make an educated guess on unknown words.”

Along the way they acquired discipline. As Usha explains, “The spelling practice should be a year-round practice. Since most of the words being prepared are not used on a daily basis, they are easy to forget, and constant reinforcement is needed. Both Shobha and Shourav used to prepare the words every day for an hour on weekdays and several hours on weekends after their homework and extracurricular activities. I also worked with them to create structured study plans before every spelling bee.”

The siblings competed for 7 years in spelling bees, both national and South Asian ones. During that period they compiled an enormous amount of material and comprehensive word lists, which they thought they would use for the benefit of the spelling community after they left competing.

“We thought we would give that back to the spelling community so that all the future spellers could spend more time learning the words and less time looking for them,” says Shobha, and so SpellPundit was born.

Lots of dinner table conversations and experiences gained during their own spelling bee preparation led to the creation of SpellPundit. Traditionally, spellers will read words from compiled lists or the dictionary and then get a parent or coach to quiz them—this is a very slow process. Says Usha, “SpellPundit was designed to address all the missing elements from other existing materials, to provide spellers with comprehensive word lists in an easy-to-use user interface.”

She shares the back story on the name chosen: “When coming up with a name for this software, we wanted a name that would tie back to our Indian origins. We chose the word pundit, which means ‘teacher of knowledge.’ Pundit also happens to be a word in a list called Spell It, which is provided by Scripps every year to spellers. That is how the name SpellPundit came into existence.”

The online unabridged Merriam-Webster dictionary has about 475,000 words, and SpellPundit has identified the most important words and arranged them in a number of modules. Each word in the modules has all the information such as the part of speech, language of origin, pronunciation, definition, and even a hint to remember a word. The software keeps track of the speller’s missed words so he or she can review them later.

The words are further arranged systematically which allows to identify the modules that are required for each level of competition: school, district/county, regional, state, and national spelling bee. The spellers first learn the words using the Learning Module and take tests on the words using the Testing Module. The spellers prepare the easier words for the school spelling bee and they prepare additional words as they work up to the national spelling bee.

“We started SpellPundit to give back to the spelling community—that was our main goal,” says Usha. “We also give part of our revenues to the North South Foundation, a nonprofit organization which conducts spelling bees, and also supports poor children in India to achieve higher education. So we are giving back to the spelling community and underprivileged children, and that is the most rewarding part.”

The young Spell Pundits are taking their spelling bee successes to another level. Shobha has been accepted to Stanford University and is planning to major in bioengineering and minor in public policy. She says “I hope to create a biomedical or healthcare startup company in the future.”

Shourav meanwhile is entering his junior year in high school and has a full slate besides doing the audio pronunciations for SpellPundit and coaching clients: “I also participate in science fairs and business competitions (DECA). I play varsity tennis for my school. In the future, I’d like to do something in the field of computer science.”

Usha, whose technical prowess has created many of the unique abilities of SpellPundit, says her children and others who participate in spelling bees gain many qualities: they learn that hard work and focus can help them achieve their goals; they learn to perform in front of a large audience and on television without fear. They also learn some more valuable lessons: to accept defeat graciously and to view their failures as merely learning opportunities.

Indeed, this story reflects that of many enterprising Indian-American families who don’t often get the spotlight but are succeeding, each in their own way. It’s a story of creative initiatives and hard work, proving that no challenge is too hard. The Dasari family proves that success is much more than a mere word in a spelling list—and you can acquire it if you believe in yourself and are willing to follow your dreams.

Lavina Melwani is a New York-based journalist who blogs at Lassi with Lavina (www.lassiwithLavina.com). Follow @lavinamelwani.