Spotlight: A Role Model for Civic Engagement and Leadership 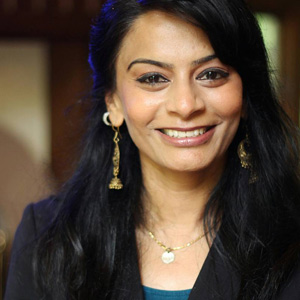 Across the US, Indian American faces are increasingly becoming visible in important government and community leadership positions. How’s Atlanta faring? Nazeera Dawood, the feisty and committed public health physician, has now set her sights on being elected to Johns Creek City Council.

“If you are not at the decision-making table, you become the menu,” Nazeera Dawood tells me over the phone. “Communities need to stay engaged. Working hard alone is not enough, it is important to have your voice heard.”

In her early 40s and mother to two daughters, Nazeera is a public health physician by training and a resident of Johns Creek. She is also a candidate for Post 5 on the Johns Creek City Council.

“I was born in a very orthodox family and grew up in a rural community in South India where women traditionally did not attend school or college.” Girls like Nazeera attended some school and were then married off at an early age, with the skills to run a home. One day, Nazeera told her mother that she wanted to be a doctor. Her mother, who had finished 3rd grade in school was supportive but fearful of the community’s reaction to Nazeera’s lofty ambitions. “My family allowed me to dream on because they never expected me to pursue it,” she says.

Nazeera approached her goal incrementally. She first finished high school, which by itself was a considerable achievement. Soon after high school, Nazeera renewed her demand to be allowed to attend medical school. “I went on a hunger strike for a week. Eventually, my father and extended family members gave their permission.” Women need to stand up for themselves, Nazeera argues, adding, “I tell young people today that they have to be persistent in having their voices heard and talents recognized.”

How did a young girl from small town India get to run for city council in the United States? 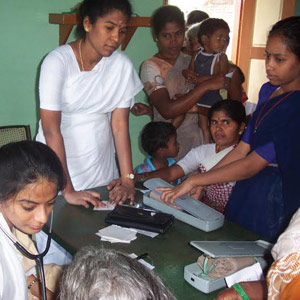 Nazeera’s experience at a rural hospital in India helped her devise prevention practices as a health promotion manager for Fulton County.

Nazeera’s dogged determination to become a doctor paid off and she attended medical school in Bangalore. In the United States, she worked at Emory University for several years before finding a job at Fulton County as a health promotion manager. “Emory was great, but was also a very protected environment. Communities don’t work in those environments. During my time at Emory, I realized that many patients were returning to the hospital with the same chronic issues such as diabetes or respiratory illnesses.” Nazeera craved for direct access to community members to deliver appropriate health messaging to promote health and prevent disease. She accepted the position at Fulton County soon after.

“When I accepted the job at Fulton County, people thought that I was taking on a government job for the supposedly good benefits. But little did they know at that time, how much I learnt on the job,” Nazeera says. Those were the experiences that have brought her where is today: a candidate for a city council seat.

Nazeera’s work at Fulton County attracted multi-million dollar grants for health promotion activities. She brought together diverse groups through coalitions and partnerships, acknowledging mutual strengths and priorities while ironing out differences. “I was neither black nor white; I was brown, so I was able to build bridges between North and South Fulton on many causes. I became an expert in building coalitions for achieving results. I used to volunteer at a rural hospital in India and had gained an appreciation for the importance of disease prevention. So at Fulton County, when I realized that there were no prevention activities, I started working on that.” 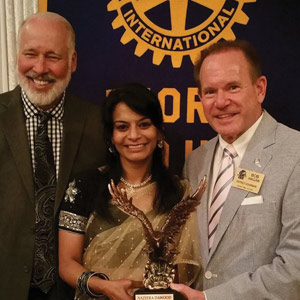 Receiving the Rotarian of the Year Award.

Soon, Nazeera’s friends and colleagues encouraged her to consider political office: “I knew that if I truly wanted to represent the community, I needed to be at the table. So that was when I started reaching out to key stakeholders to gauge their interest (in her campaign).

My career decisions have always been motivated by a strong interest in filling gaps and meeting unmet needs,” thus making the choice to run for city council an almost obvious next step.

“When one wants to serve the community, one has to be prepared to wait for the right moment and opportunity. You cannot do everything by yourself. It will take years and years. It’s important to build common ground, and partnership.” And the right moment, Nazeera believes, is now.

Nazeera’s sense for civic duty was inculcated at an early age by her father, whose attention to others’ needs left an impression on her. “I learned about compromise and cooperation. It has stayed with me all these years.” And leadership, she adds, “is not something that I learned deliberately. It is not about taking leadership classes. It is in all of us; we just have to bring it out.” “I am not coming to this campaign uninitiated. My record of representing communities, my good communication and networking skills, and my people-centric approach make me the right candidate for city council,” Nazeera says confidently.

Nazeera draws a range of support from her immediate family here in Atlanta and from an extended network of friends and community members. “I am an honorary OG,” she quips, referring to a popular slang term that is evocative of fraternity in certain communities. 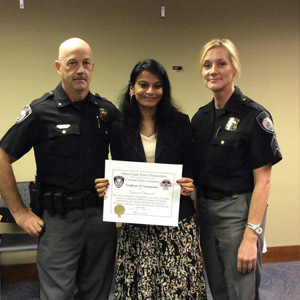 Receiving her certificate as a Citizens Police Academy graduate from the city of Johns Creek, Georgia.

“Johns Creek is a great place to live. Huge numbers of families are moving into Johns Creek for its high performing schools and quality of life in general.” A major focus of Nazeera’s campaign platform for the city council seat is transportation: “I want to bring industry and communities together to find ways to mitigate traffic congestion.” Nazeera will also work for lower property taxes in Johns Creek. “I also want to expand on this idea of East meeting West through cricket. I would like to work with the Atlanta cricket league to bring a cricket ground to Johns Creek. My campaign manager is already working on it,” Nazeera adds.

“Approximately twenty five percent of the residents of Johns Creek are Asian American. Being a member of a minority community myself, I will work towards building bridges between diverse communities in Johns Creek. My work at Fulton County has really trained me to do this well,” Nazeera argues, adding, “I will host listening sessions with members from the Chinese community, the Indian community, and other communities to get a real sense for their needs.”

One of Nazeera’s goals in this campaign is also to boost voter turnout amongst minority groups by 20 percent. Nazeera’s campaign is actively involved in spreading messages on local government participation through women and youth communities and through various social media platforms.

Nazeera avoids political party affiliation, suggesting instead that is she interested in receiving support from all communities. And her next steps in politics? “I really want to show how to work differently and effectively with communities. Throughout my life I have believed in and worked at building coalitions. That is my only goal.”

Elections for Post 5 of the Johns Creek City Council will be held on Tuesday, November 3rd, 2015.

While Indian community members like Ms. Dawood continue to expand the horizons of what is possible for minorities, be it running for political office or promoting health, young Mehul Bhagat and Shuchi Goyal are pursuing similar goals while in college. They both participated in the Washington Leadership Program (WLP), a summer internship that allows high performing South Asian American college students the opportunity to intern in a Congressional Office for eight weeks. 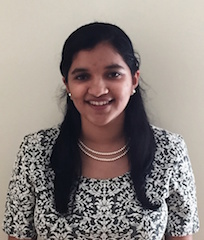 Shuchi Goyal is a rising junior at the University of Georgia, where she is pursuing B.A. and M.A. degrees in economics, along with minors in history and Chinese. Last summer Shuchi studied abroad at the University of Oxford and later interned as an English teacher at the New Oriental School in Wuhan, China. She was also recognized as a 2014 Campus Media Leader by the American Jewish Committee and traveled to Israel and Palestine as a student journalist to learn about political, cultural, and other factors surrounding the Arab-Israeli Conflict. This summer she decided to stay in this country and look for opportunities to be involved in domestic politics. The WLP connected Shuchi with the White House Initiative for Asian Americans and Pacific Islanders (WHIAAPI), which is housed under the Department of Education in Washington D.C. At the WHIAAPI, Shuchi had the opportunity to apply concepts from her economics classes when drafting public policy proposals and doing research on AAPI immigrant communities. Shuchi also organized events aimed at educating AAPI on issues such as healthcare or overcoming language barriers. “I really appreciated WLP’s commitment to the individual experiences of each of its summer scholars as it worked to place them in internships that matched their personal interests. Equally exciting for me is the prospect of learning from my fellow participants and from the numerous speakers WLP arranges for us to meet.” Her summer internship will help her decide her career goals. She adds, “I’m also hoping for more opportunities to travel abroad in the future and learn more languages, and I would like to continue writing and publishing articles about issues I care about, with the ultimate goal of one day being published in the New York Times. If none of those work out, I will become a rock star.” 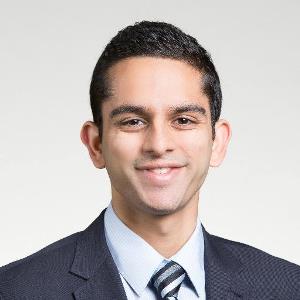 Mehul Bhagat is a rising sophomore at Emory University and is a Robert W. Woodruff Scholar double majoring in creative writing and economics. Mehul was a 2015 Public Policy and Leadership Fellow at the Harvard Kennedy School and is currently working on three startups in art, nutrition, and education. Also a jazz saxophonist, Mehul plays for Emory ensembles in and around Atlanta. Like Shuchi, Mehul also found an internship opportunity in Washington D.C., albeit with a social enterprise––The World Within Foundation. Working with co-founder Rostam Zafari, Mehul says the social enterprise is “launching social business start-ups that address key issues such as education and early child development in urban slums. It will help turn the focus from profit maximization to social impact, from short-term solutions to long-term investments.” The start-up’s ultimate goal is to empower individuals and connect different entities such as NGOs, governments, and corporations. Mehul adds, “I’m convinced that our future will be driven by improvements in how we communicate and how we use information to create real and sustainable solutions to global challenges. How will we address poverty, human rights, education, and healthcare going forward? In the future I hope our team will make strides to overcome some of these challenges.”