SpotLight: Dina Sheth, For the Love of Dance 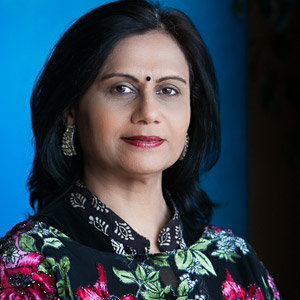 Kruti Dance Academy’s fabulous, custom-built studio in Duluth and the dozens of impeccably scripted and performed arangetrams of its students stands as a testament of this guru’s stature as an Atlanta doyen of Bharatnatyam. The high profile appearances of her students in popular national television shows such as America’s Got Talent and Chak Dhoom Dhoom in India further highlights her outlier success.

Behind the uncommon composure and the self-assured and friendly smile lies a fierce commitment to her academy, her students, and her art form. Indeed, there’s more to Dina Sheth, Founder-Director of Atlanta’s Kruti Dance Academy, than a veteran personality. Her serenity and warmth hide years of unswerving dedication and hard work devoted to spreading the richness of Indian culture and heritage in her adoptive country through the medium of classical dance. Today, Kruti Dance Academy, the institution that she heads with her daughter Shemoni Parekh, is making waves across America’s multicultural landscape as a cutting edge Indian dance school that attracts students from varied communities. 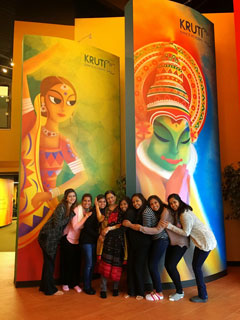 Kruti Dance Academy students with their beloved “Dina Aunty” at the breathtaking entrance of the new studio.

It was marriage that brought Dina from India to the USA, where she pursued her education in Microbiology at George Washington University. But fate had other plans for this young wife and mother. At a Jagjit Singh concert that her husband Jayesh and she attended with baby daughter Shemoni, Dinaben (as she is now commonly known in the community) was amazed at the little girl’s spontaneous response to Singh’s classical ghazals: “She was barely a year old and she was tapping her fingers to the rhythm of the music! That moment is what inspired me; I wanted my daughter to stay connected to her Indian culture as she grew up in America.”

That tiny yet powerful moment of revelation led to Dinaben’s teaching Bharatanatyam in 1995, “mainly to teach my children and some other children in the neighborhood, for cultural enhancement.” It was a humble beginning that started in her basement. At the time, she had no idea where the journey would take her. “I started with five students, spent two hours with each family to convince them that I can teach and I can make a difference in their child’s lives. I had not imagined at all that dance would take me to this extent. The academy grew and grew,” she says with pride.

(Right) An exponent in the making: As a young student of Vadodara’s College of Indian Music, Dance, and Dramatics, affiliated to the prestigious M. S. University.

Dinaben’s story begins with her musically oriented mother deciding to enroll her along with her sister for classical dance and music lessons respectively in their home town of Vadodara (Gujarat). She recalls how her mother never gave them a choice—the enrollment was pretty much a given that the girls were expected to embrace.

For nearly 12 years, “week in and week out” Dinaben attended Vadodara’s College of Indian Music, Dance, and Dramatics, affiliated with the prestigious M. S. University. Ever so slowly, Bharatnatyam grew on her. “I think I understood more and more the value of Bharatnatyam with each consecutive phase in my life: college, marriage, and then having a daughter of my own.” 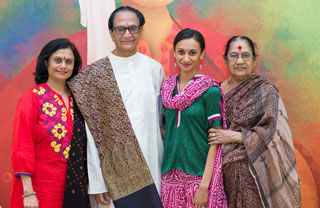 (Left) Sheth and her daughter Shemoni with her guru, Professor C.V. Chandrasekhar, and Smt. Jaya Chandrasekhar during the grand opening of the new Kruti studio. (Photo: Gregory Job)

Dinaben’s singular focus on artistic excellence was honed by her many gurus. The late Shri Kubernath Tanjorkar was among her first mentors. Later, she trained under Shrimati Anjali Merh and Shri Professor C.V. Chandrasekhar, who had learned dance from Bharatanatyam’s iconic modern pioneer, Rukmini Devi Arundale.

Settling down in the U.S., Dinaben began volunteering at the schools of her children, Shemoni and Romeen. That, too, powered her growing desire to further the reach of Indian classical dance in America: “Being a volunteer in the American school system (a system which I had never gone through) really taught me why it is important to teach Indian classical dance in America. I wanted to use dance as a platform to teach cultural values, self-esteem, and pride in our lineage.”

Dinaben has lost track of the number of dance students she has mentored in the course of her family’s relocations from New Jersey to Connecticut, Washington D.C., and finally Atlanta. “In Connecticut I remember having 5-7 students, in New Jersey having 10-15 students. When we moved to D.C., I had about 25-30 students; when we moved to Atlanta, I started all over again with five students. Now, to be honest with you, I do need to track myself one day and figure out exactly how many students I have taught! But I would say the numbers are now in thousands.”

Along the way, awards and accolades have flowed in. The India House of Worship, Maryland bestowed the “Dedicated Instructor” award upon her in 1993. The India American Cultural Association in Atlanta recognized her contribution to culture with the Artistic Excellence award in 1997 and 2002. Dinaben is frequently invited to judge classical and folk dance competitions and beauty pageants nationally. 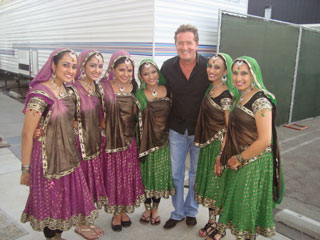 Out of 100,000 acts submitted for consideration in the popular TV show, America’s Got Talent, the Kruti team made it to the top 400 at Orlando, Florida and then the top 100 at Las Vegas. Later, they were invited directly into the top 25 in the wildcard show as the favorite act of host Piers Morgan. Seen here is the team with Mr. Morgan.

Even as Kruti Dance Academy grew in strength, Dinaben realized that for Bharatanatyam to gain traction in mainstream American culture, she would have to step out of the comfort zone of classical tradition and take the dance form into unexplored territory. That bold initiative has paid off handsomely. In 2010, Kruti’s students performed in the popular reality show, America’s Got Talent. Out of 100,000 acts, the Kruti team made it to the top 400 at Orlando, Florida and then the top 100 at Las Vegas. Dinaben’s eyes light up as she recalls the excitement: “The top 100 teams were invited to perform in Vegas for one last round to choose the top 48 teams to perform for the live show in Hollywood. They loved us, but we unfortunately did not make it through. Little did we know that in a few short weeks we would be invited directly into the top 25 in the wildcard show as Piers Morgan’s favorite act! Hollywood was an experience that we will never forget!”

Speaking of taking Bharatnatyam into unexplored territory, purists have always rolled their eyes at the Indian film industry’s commercialized—some would just say crass—adaptations of classical dance. At Kruti, Dinaben and Shemoni decided to take the road less traveled, blurring the lines between ‘filmi’ dance and the purely traditional art form. Why so? “Years ago there was a time when I used to just teach Bharatnatyam. It was only after our Academy grew in size did I see the relative relatability of Bollywood when compared to Bharatnatyam. It was then that I decided if we do not teach our children in the right way, then they are only going to be learning from the movies and that may not correctly represent the Indian culture. We decided to introduce Bollywood in a very rich form, one in which children can enjoy, but also respect the Indian culture. With regards to how we teach Bharatnatyam, we have not compromised on adherence to its traditional form. So it is not that we have lost the traditional aspect of Bharatnatyam at all; rather we have introduced Bollywood as an additional course so that we can have more children interested in Indian culture.” Kruti’s current repertoire is a varied one, ranging from Bharatanatyam to fusion, Bollywood, Mommy & Me, and dance fitness classes. 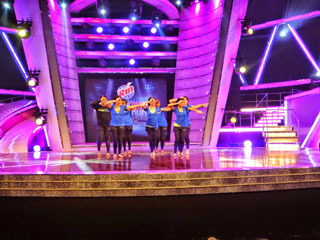 In 2011, Dinaben’s innovative approach to fusing classical traditions with elements of popular dance earned the academy an invitation from ‘back home’—an opportunity to participate in India’s hugely popular dance reality show Chak Dhoom Dhoom, aired on Colors TV channel. Kruti was selected to represent the U.S. at the Mumbai-based show. Here, too, Shemoni’s leadership and brilliant choreography powered the 7-member team to the Top 9 level. For her young students, the trip to India was a memorable and thrilling experience. Dinaben’s bold experiments and the global exposure have taken her academy to new heights: the icing on the cake—an invitation for Kruti to perform at the Nobel Peace Gala in Atlanta late this year.

At the core of Dinaben’s passion for dance lies the belief that dance molds a child’s personality, inculcating lifelong values. “Dance, I believe, teaches a tremendous amount of discipline; when that discipline is taken to a higher level, it reaches a spiritual level. When I was young, I didn’t enjoy dance, but after three or four years of training, I understood how much it helped me in my day-to-day activity. And that is what we try doing with our students—gradually inculcate the love of the art form while establishing personal and work ethic. Our students learn so much discipline and time management. This builds their personality, it develops their leadership skills, and it teaches them the art of presentation, self-confidence, and self-esteem. Dance has a lot of advantages which young children don’t foresee in the beginning, but they start feeling after 3-4 years of training.” 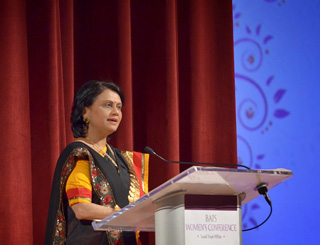 Keynote speaker for the 2014 Women’s Conference at BAPS Swaminarayan Mandir of Atlanta.

The teacher herself is a shining example of self-confidence, self-esteem, and leadership. Her influence now extends well beyond the sphere of Bharatnatyam. As an inspiring South Asian artist, entrepreneur, and leader, Dinaben is frequently invited as a speaker. She was the keynote speaker for the 2014 Women’s Conference at BAPS Swaminarayan Mandir of Atlanta.

Every successful enterprise has a great backend team; Dinaben gives full credit to her family—husband and parents-in-law—who helped and supported her through the years while her children were growing up. “Unfortunately, both my mother-in-law and father-in-law have passed away; they are no longer with me. But their role was incredibly important in my life. They encouraged me. My husband Jayesh has also always been with me 100 percent! His support when my children were young was invaluable. When I used to teach on weekends, he used to take care of the children; he has always supported me throughout. Even to this day and age, he is always my backbone; I could not have done it without him.” 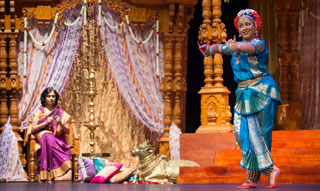 As founder and director of Kruti Dance Academy, Sheth has presided over nearly a hundred arangetrams of her students. (Photo: Gregory Job).

Kruti Dance Academy is completing 20 years in Atlanta and by the end of this summer over 100 Kruti students would have performed an arangetram. The institute is going places under Shemoni’s leadership, something that gives Dinaben tremendous inner satisfaction: “Her creativity, her knowledge, her vision has improved the dance studio and brought it to a new generation and at a different level.”