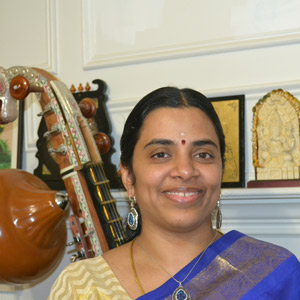 Accomplished veena artiste and Carnatic singer Subhashini Krishnamurthy is a shimmering jewel in Atlanta’s treasure trove of Indian classical musicians. Her extraordinary skills come from a lifetime of dedication to her craft. Whether it’s performing in concerts, composing music for dance programs, teaching music to young Indian-Americans, or singing in Atlanta’s Hindu Temple, Subhashini brings the same degree of passion and innate humility to all her endeavors. 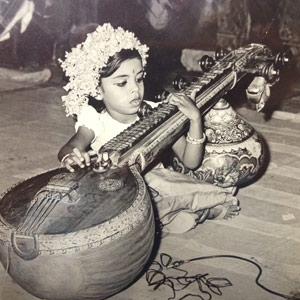 (Left) Subhashini’s first recital, at the tender age of seven.

Coimbatore, Tamil Nadu: Pattammal is sitting in her puja room playing the veena to a rapt audience of one—her small granddaughter, Subhashini. When the composition ends, Pattammal turns to Subhashini and says, “Bring your veena; I will teach you a new composition.” From the adjoining room, the little girl carries in a veena that is one size too large for her. An hour later, Pattammal says to Subhashini, “I want you to practice more intensely. I am going to enroll you in a music competition.” The child barely understands what a competition is; nevertheless, she obediently nods her head in affirmation.

Prizes galore—and prized memories
Thus it was that at the tender age of eight, Subhashini participated in her first veena competition held under the auspices of All India Radio, Coimbatore, and received the first prize for her performance. 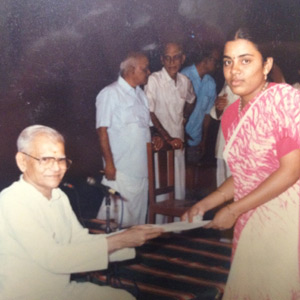 Subhashini humorously recalls another episode from her younger days that tested not only her music skills but also her self-confidence. A few weeks before a prestigious competition, the organizers had sent each registrant a list of forty ragas to be practiced for the event. According to the rules, each participant would have to show his or her proficiency in two ragas that the judges would select at random from the list. When it came to Subhashini’s turn, one of the judges, a senior musician himself, mistakenly asked Subhashini to render raga alapana in two ragas not included in the original list. Although Subhashini was startled by the judge’s demand, without further ado, she rendered excellent raga alapanas on the two ragas selected by the judge. As she was concluding the alapana, the judge realized his mistake. Later, he apologized for his error and smiling warmly, complimented Subhashini not only for her proficiency but her extraordinary presence of mind for one so young. Needless to say, he unhesitatingly awarded her the first prize!

Subhashini Krishnamurthy, as she is known, is a software engineer by profession and works for an investment research firm. She holds a Bachelor’s degree in Electronics and Communication Engineering and a Master’s degree in Computer Science from the University of Florida. She is proficient both in veena and vocal music. Her first guru in vocal was her mother, Geetha Krishnamurthy. Later, Subhashini was tutored by Meena Subramanian, a renowned teacher and a disciple of the illustrious singer, M. L. Vasanthakumari. Subhashini humbly dedicates her talents in veena and vocal music to her grandmother, mother, and her teacher.

Subhashini moved to the U.S. a few years after she married Shiva Vaidyanathan, a software engineer by profession. She credits her husband for the encouragement he gave her to continue with her pursuit of classical music. Shiva, she says, was also instrumental in encouraging her to diversify her talent by composing music for dance programs and operas. Subhashini and Shiva are the proud parents of two young daughters, Srividya and Sharada. Both learn music from their mother. Eight-year-old Srividya is also learning Bharatanatyam while five-year-old Sharada is learning both vocal music from her mother and mridangam from Sri Suresh Kothandaraman. 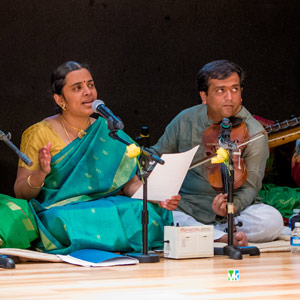 Amidst her busy schedule, Subhashini also teaches music. She is selective when taking on students as it is her firm belief that classical music is not merely a hobby but a lifetime endeavor that requires rigorous practice, perseverance, and complete dedication. She fondly recollects the time when she, jointly with two other Atlanta music teachers, Kala Vasudevan and C. V. Subramanian, trained music students from Atlanta to participate in the Cleveland Aradhana festival. It was a fulfilling experience, says Subhashini, thanks to the talented and hardworking youngsters who brought recognition to Atlanta’s Indian community by winning several prizes. For these dedicated teachers, it was immensely gratifying to know that a younger generation was ready and eager to take on the challenge of nurturing their native, traditional Indian art forms. 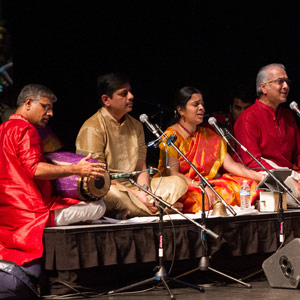 A diversified talent
Subhashini, in recent years, has been focused more on singing in dance programs. She is also actively involved in composing music for operas and dance-dramas. Her maiden attempt at composing was for a dance-drama staged at the University of Florida, based on Sri Andal, the 8th century Tamil woman saint famed for her passionate compositions dedicated to Lord Ranganatha. Subhashini received many accolades for her brilliant composing. Since then, she has been regularly sought after for composing music. Some of her noteworthy contributions as a composer include Siva Panchaksharam for the Smithsonian Museum; Shivogam for a Hindu Temple of Atlanta sponsored event; Mahishasura Mardhini for the Saptapadi group; and Bhaktha Markendaya, a ballet choreographed by Revathi Komanduri.

Sasikala Penumarthi, a well-known Kuchipudi dancer in Atlanta, who worked closely with Subhashini over several months for the ballet, Swapna Vijayam (an Indian version of The Nutcracker), says, “There is divinity in her composition, and there is divinity in her voice.” She adds that she is proud to be in the satsang of this “Gana Kokila.” Seshu Saarma, a respected leader at Atlanta’s Hindu Temple is all praise for Subhashini when she says, “Subhashini is like a well-tuned shruti box. You turn it on ... it is always perfect at any pitch. Her voice culture is pure, her music is divine, and the most striking attribute about her is her humility.”

Accolades and accomplishments have not altered Subhashini’s innate modesty as she acknowledges the role of community elders in furthering her musical career, its brilliant trajectory made possible thanks to the framework of institutions these individuals have created to support classical Indian music and dance in Atlanta. Subhashini is especially grateful to Vinod Menon, Shoba Natarajan, Seshu Sarma, Sasikala Penumarthi, and Revathi Komanduri for encouraging her as a composer.

Diversity of taste
What are her personal preferences in music? Subhashini confesses that she enjoys listening to a wide variety of genres in Indian music, be it Carnatic, Hindustani, ghazals, or folk music. While she is partial towards the great masters of classical Carnatic music—Lalgudi Jayaraman, Mandolin U. Srinivas, D. K. Jayaraman, M. L. Vasanthakumari and M. S. Subbulakshmi—she is also happy to listen to younger artistes of today. She enjoys listening to Hindustani stalwarts like Pandit Ravi Shankar and Parveen Sultana but admits her relative unfamiliarity with the nuances of this musical system and her desire to explore it in more detail. Good music, says Subhashini, has the power to heal and alleviate stress from our hectic lives and hence one need not discriminate between genres.

When she listens to her students sing, she does not feel that they are Indian-Americans growing up in the midst of a Western culture. Their pronunciation, diction, and delivery are chaste, says this teacher proudly, and parallel that of youngsters who live and learn music in India. Advances in technology have come to mean that students of classical Indian music based outside the country have equal access to the great musicians of India, from both past and present. And, consequently, she says, neither distance nor cultural differences are barriers to learning.

Subhashini’s goals for the future are to continue with teaching music to talented youngsters and composing music. Which of her musical activities— playing the veena, singing for dance concerts, or composing music—please her the most? Surprisingly, her response is, none of these! Instead, says Subhashini, “The one that pleases my inner self most is when I am occasionally called to sing at the Hindu Temple of Atlanta during Sayanotsavam,” the daily late evening ritual when the temple deity is sung to sleep for the night with specially composed hymns. “There is no audience, no kudos or awards to be received. I dedicate the music, with utmost humility, to God. The spiritual satisfaction that I derive is unmatched.”

Dr. Ram Sriram is Professor Emeritus, Georgia State University, College of Business. He is also Founder-President of CAMAGA (Carnatic Music Association of Georgia) and a keen mridangam player as well.

Updated 9/9/16 with this CORRECTION:
In the article titled, “Pitch Perfect” (September 2016), which was a spotlight on veena artiste and Carnatic singer, Subhashini, she was mentioned as the composer of the dance drama Devi Maha Maya. That was in error. The composer was Srini Kishore of Tallahassee, FL. Also, besides Swapna Vijayam that was referenced in the article, Subhashini has also composed music for Andal Kalyanam and Pasidi Poornima, three ballets that are dear to her heart since they were choreographed by Sasikala Penumarthi, who played an important role in shaping her as a composer for dance ballets.