Summer in a Golden Age 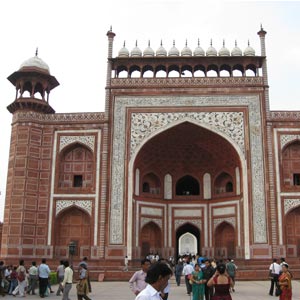 A visit to Agra gives ANJU GATTANI a glimpse into the lost world of the Mughals, but also raises questions about the withering neglect of the architectural jewels of that era, and whether we can recreate a world where the influences of various cultures result in a harmonious confluence of art.

Flipping through the pages of Indu Sundaresan’s Taj Trilogy recently, I was transported back in time to the 16th and 17th centuries, when the Mughal empire’s glory was at its zenith, and Emperors Akbar, Jahangir and Shah Jahan left behind monuments and palaces that spoke of their enormous wealth and power and reflected a distinctive fusion of Persian and Indian architectural styles. The book reminded me of my family’s summer trip to Agra, which began as a vacation but ended up being an exploration into an impressive architectural legacy that includes struc-tures like the Agra Fort, the city of Fatehpur Sikri and the celebrated Taj Mahal.

The Taj Mahal, a monument created by Emperor Shah Jahan (the son of Jahangir and the grandson of Akbar) continues to be the crown jewel of Mughal architecture.

Renowned as one of the Seven Wonders of the World, the Taj Mahal echoes the immortal love between Shah Jahan and his wife, Arjumand Bano, also known as Mumtaz Mahal. The monument took approximately 20,000 people 22 years to complete. Geometry, symmetry and balance were the key structures to every Mughal masterpiece and the Taj Mahal is a mystery that no modern man comprehends fully even today.

Our first stop, Agra Fort, was built by Emperor Akbar over a period of eight years, and housed his heirs—his son Jahangir, grandson Shah Jahan, and even his great-grandson, the infamous Aurangzeb. Historians believe Shah Jahan was forced by his tyrannical son Aurangzeb to spend the last years of his life as a prisoner in the Agra Fort, gazing at his Taj Mahal from the windows. Located in the east of Agra city, along the banks of the River Yamuna, this semi-circular structure, with red sandstone walls 70 ft. high, is surrounded by a double moat that was once filled with crocodiles. The moat is now dry but Emperor Jahangir’s palace, famous for its blend of Hindu and Asian architecture, stands out even today in Rajput-style glory.

We began our visit to Agra with an assumption that everything we saw would be either Persian or Muslim in flavor, but ended up learning that many facets of the Mughal monuments were inspired by Hindu, or more precisely, Rajput styles. The puzzling Rajput connection was explained by our tour guide—Emperor Jahangir’s mother, Jodhabai, was originally from Rajasthan and in an attempt to preserve unity and harmony throughout India, Akbar had married a Hindu princess. A romantic view of history has created many Akbar-Jodhabai stories. In a popular version, Jodha became the emperor’s beloved wife and had a huge portion of the palace to herself, where she also had a Hindu temple built. The Bollywood movie Jodha-Akbar explores their relationship.

We were shocked to learn, also, that the people who put these mammoth architectural jewels together had also caused them to be torn to shreds. But more about that later.

The grandeur and largesse 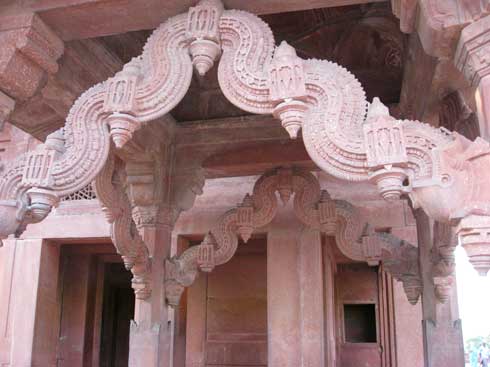 Our tour guide pointed out that the emperor housed his wives in a section of the fort called Khas Mahal. The summer palace on the top floor was matched by a winter palace just below. We saw Meena Bazar (ladies’ market) where the women from Akbar’s harem and other rich women would shop every Friday. Jets once spraying rose water, resplendent fountains, water channels running in a symmetrical maze around a grape garden called Angoori Bagh took center stage. On Emperor Akbar’s orders, soil was brought from Kashmir to create this paradise of a garden, called Firdaus, where every Mughal sought to find jannat (heaven) on earth.

The Mughal love of splendor is also evident in the Samman Burj (Jasmine Tower), built by Emperor Jahangir for his 20th wife, Mehrunissa, whose beauty made her famous as Noor-i-Jahan (“Light of the World”).

About 37 km west of Agra on the Jaipur-Agra highway lies Fatehpur Sikri (Victory City), which Akbar made his capital in 1569. The city, which is home to Jama Masjid, one of India’s largest mosques, is believed to have influenced the evolution of town planning in the country. However, a severe water shortage forced Emperor Akbar and his court to desert the city 50 years later.

Tucked behind a wall 6 km long and secured behind seven mammoth gates stands the Diwan-i-Am or the Hall of Public Audience, the imperial box where Akbar would meet with his ministers in public and make decisions on the law. Akbar would sit in the center on the Takht-e-Taus, the Peacock Throne (made of pure gold and studded with diamonds and jewels), and address thousands of litigants and petitioners. Geometry, lavish space, symmetry and balance—the key concepts to Mughal architecture—make it possible for any audience member to see the emperor from any spot in the hall, without a single pillar obstructing the view! 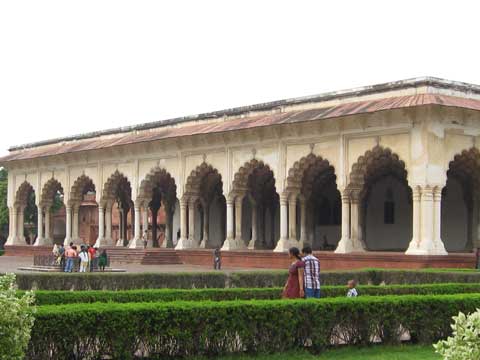 The Diwan-i-Khas (Hall of Private Audience), the chamber where Akbar would meet with his nobles, known fondly as his “Navratans” (Nine Jewels), was also called the Jewel House. A gorgeous, two-story-high, octagonal-shaped pillar in the center of the hall served as Akbar’s throne. According to legend, Anup Talao, a square-shaped island-like structure in the middle of a pond, was precisely where Mian Tansen, Akbar’s favorite musician, would sing while Akbar watched from a balcony above. We closed our eyes and imagined rose-scented water spraying from the surviving jets in the surrounding pond and soft notes being plucked on a tanpura.

Our next stop, the Taj Mahal, was as much anticipated as a walk in paradise. With artistic influences from India, Iran, Iraq, Turkey, Saudi Arabia, Central Asia, Venice and France, the Taj Mahal, we learned, is not just a monument of the Muslim faith but a culmination of several cultures and a convergence of diverse forms of art.

Red stone from Dholpur and Charkoh, silver, gold, sapphires, jaspers, emeralds, onyx, carnelian and other precious stones from local chiefs, kings and from empires abroad dot the magnificent surface of the Taj Mahal, estimated to have cost Rs. 3 crore at the time. As if that wasn’t enough to take our breath away, marble archways, screens, latticework and mosaics, and inlay work with black inscriptions from the Holy Quran flow with the minarets to climax at the finial sitting high atop the monument to Shah Jahan’s memory of his dead love.

The lotus-shaped base nestling just below the 30-ft high finial is followed by a succession of goblet-shape structures, a half crescent-shaped moon (both tips pointing towards the sky), and a kalash with its pointed tip facing up—all clambering one after the other on a spear (akin to Shiva’s staff).

The Mughal emperors, with their strong Hindu influence, united the best of Persian and Indian architecture, collaborating with artists from around the world to give us the Taj Mahal. But what happened after?

The British weren’t the only plunderers


I had believed that it was the British alone who had originally stripped India of all its wealth. My Agra trip was an eye-opener. I learned that the Mughals themselves—the decline of the Mughal empire having been initiated by Aurangzeb—spurred the Rohillas, Rajputs, Marathas and neighboring Jats to plunder Agra.

Portraits of Mughal rulers that once graced the walls of Khas Mahal in Agra Fort (where women of nobility were educated) were later snatched by an Indian Raja.

Liquid gold colors that once filled the carvings on the ceilings and walls of Diwan-I-Khas, at Agra Fort, had been dug out by local tribes years ago. The Peacock Throne had been snatched by the Afghan ruler Nadir Shah in 1736; it was sent to Persia and melted down.

The main entry gate to the Taj Mahal, originally made of pure silver and studded with 1,100 nails each bearing a silver rupee coin on its head, was later melted by local Indian tribes and replaced by the British with a bronze one instead.

The British continued to grab whatever the locals left behind, like the Kohinoor diamond and the finial atop the Taj Mahal, originally made of pure gold, which they allegedly replaced with a replica. Evidently, the plunder continued to go on.

They shook their heads; from the dilapidated state of our surroundings it was hard to imagine anything beyond what was visible: scratched and pillaged red sandstone rooms, walls weathered by heat, dust, and storm; ponds, lakes, fountains and water channels now stagnant, sitting cracked and dry. We looked up to the Paanch Mahal, a five-tier structure raised to the sky, where Akbar was said to spend time with his queens. This structure was out of bounds for visitors, and the government had sealed the entry to avoid damage to its withering state and to keep away graffiti writers.

Neglect and the expense involved in maintaining Agra’s palaces and monuments, recognized by UNESCO as World Heritage Sites, are leading these monuments down the path of ruin. My husband and I found it hard to explain to our children (aged 15 and 11) the glory of the past. Perhaps we could show them the Bollywood interpretations of Mughal history—Mughal-e-Azam or Jodha-Akbar,… and leave the rest to their imagination?

The children recalled the Newport Mansions at Rhode Island, which preserve the historic landmarks of the Gilded Age, and questioned why a world-wonder like Agra was withering away. We struggled for answers.

What the government has failed to do, however, the private sector has taken up as a challenge. The ITC Mughal Sheraton, a luxury hotel that has won the first Aga Khan Award for “successfully achieving consistency with historical context” is one such leader. The hotel has recreated the splendor of Mughal palaces with its Babur Darwaza (named after the founder of the dynasty), the Humayun Bridge (named for Babur’s son), the Akbar Darbar, with its décor inspired by the court of the most famous Mughal, and bridge-like walkways named for Mughal queens. Its spa, adorned with the pomegranate as its leitmotif, reflects the history of the fruit Akbar first brought back to India from Afghanistan. Named in honor of Akbar’s chief advisor, Raja Man Singh, is the Man Singh Suite, decorated to echo the magnificence of Rajput valor. Mian Tansen’s musical legacy is reflected in the Tansen Suite, done up with musical instruments. Nishad Baugh, one of the four gardens gracing the hotel’s exteriors, is built like Anup Talao, with a raised, central island where musicians perform live every evening.

Market forces may have succeeded in reviving some of the architecture of the golden age of Mughals, but can it save our rich architectural legacy without adequate concern from responsible authorities? And would they be moved to act with a groundswell of national concern? At risk are not only the gems of a rich dynasty but also the sentiments they represent. Can we today create a monument where artistic influences from around the world are a successful amalgam of the best? Can we work with members of other faiths and agree on balance and harmony where one monument represents all?

[Anju Gattani is an Atlanta based author and freelance journalist. Duty And Desire, her debut novel, is the first book in her Winds of Fire series. Find her at www.anjugattani.com.]