Talk Time: A Genius Who Finds Gold in Garbage 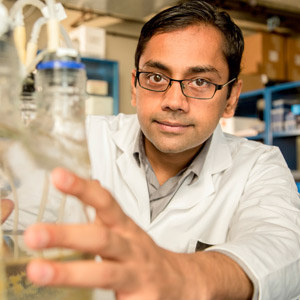 “Yuck to Wow” is a way to sum up the work of Columbia University environmentalist KARTIK CHANDRAN. The only Indian American among the 24 MacArthur Fellows in 2015, he’s tackling the problems of cities and has been hailed for integrating ecology, biology, and engineering to purify water.

Your award-winning research involves treating fecal sludge and other waste streams to derive fuels and other resources from them. You have said that you work at the nexus between water, energy, nutrients, and chemicals. Can you explain what that means?
Traditionally we were looking at different mechanisms and pathways to get clean water. Then we realized there are more issues here than just the challenges in getting clean water and that all these socalled waste streams from fecal sludge could not only be sources of water but also sources of energy such as biogas and also higher-value fuels, biodiesel, for instance. What we’re saying is we’ll offset some of the energy and chemical inputs needed to clean water by producing some of them from the waste stream itself. Nitrogen and phosphorus can be recovered and reutilized, so that’s the nutrient part of the equation. We’ve been treating the problem of clean water in a somewhat simplistic form by looking at these waste streams as something to clean up at any cost. That’s possible in some parts of the world but not possible for most of the world.

So basically the one-size-fits-all Western model of clean water is too simplistic and expensive for all?
It’s not just about the expense; it’s other kinds of resources, too. You go to India: there’s money, sure, but not enough energy to throw around. Nobody is going to expend energy to clean wastewater—there are so many additional challenges that communities in India face. It’s not just money; it’s also localized production of chemicals and energy.

Why did you start with Ghana as ground zero for your research?
That’s where a lot of activities are already going on. There’s awareness, there’s technology, there’s education to a certain extent—it’s a good place to work. Places like India, China, Brazil could also have been very good options.

Has this conversation come up in India? Have you approached people there and talked about implementing it on some sort of scale?
Yes, this conversation is increasingly happening now. Scale doesn’t have to mean one massive system, it could mean multiple systems as well. It’s not a thisor- that approach—it’s probably a hybrid of both.

How has growing up in India shaped your approach here? There’s a very different mindset in India, for example, in finding solutions in stuff that people just throw away.
It’s hard to say, but I would say that the exposure certainly was there. We see how it is being handled, then when we come to this country we see it being handled in a different fashion. It’s the exposure to different models that keeps things interesting.

How much of a dent do you think this will make in the world pollution problem?
The potential is definitely there. Scaling is important; this has to be implemented at scale. There are immediate impacts on water quality and perhaps slightly longer-term impacts on human health.

What are the lessons from your research in Ghana, for example, that the West can also learn from?
Education absolutely needs to be a part of this overall thinking. Technology could be one component, policy could be one component, but unless the local communities are educated and interested and proficient at asking the right questions, nothing is going to work. It’s also important for people to learn about such challenges all over the world rather than being focused on one narrow aspect. Everyone needs to get educated here, not just one side.

When you explain your research, I’m curious about the initial reactions you get. How much of the “eew, gross” factor plays in there?
It’s not that bad any more; it’s getting better. When I first joined Columbia it was worse, but it definitely is getting better.

Have you decided what you’re going to do with the MacArthur genius award? A new project or more detail into this one?
Honestly, I have to figure this out. So far we are doing what we know, but perhaps there are other bigger challenges that we need to address. For example, we need to figure out what to do with future cities. We know now that at least 60 percent of the world’s population will live in cities, but we have no idea what to do—how to provide them with clean water and clean air, adequate energy, whether the centralized model is going to work. That’s something I am really interested in and would like to at least begin to explore.

Where is your home base in India? Do you visit often?
It’s in Chennai. I visit as often as everybody else— as much as work can afford.