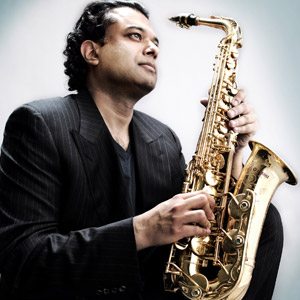 The 2016 Grammy for instrumental composition went to Arturo O'Farrill and the Afro Latin Jazz Orchestra featuring RUDRESH MAHANTHAPPA for “The Afro Latin Jazz Suite.” A star in the jazz world, Mahanthappa has won a Doris Duke Performing Artist Award, a Guggenheim Fellowship, two New York Foundation for the Arts Fellowships, and commissions from the Rockefeller Foundation MAP Fund, Chamber Music America, and the American Composers Forum.

When did you first become interested in jazz?
My parents settled in Boulder, Colorado in ‘65. My father was very passionate about physics and to some degree I think he ran away from India—and I have that renegade spirit. My older brother played clarinet. When it came time to choose an instrument he said to me the guys in the school jazz band looked like they were having a lot more fun than I was. “Maybe you should think about saxophone.” He was talking about improvisation…these guys, they stand up and do solo, they're making them up. I thought that was intriguing, too.

I had a really good teacher, Mark Harris, from fourth grade to college; I still think of him as the best teacher I ever had. He was just very versatile and talked about music in broad ways. I was his very first student. He was a sophomore in college. Maybe I was his lab rat. My main priority as a teenager was to learn sax solos from the top 40 songs because I wanted to get the girls. Your motivations are funny at that age.

When did you decide that this was going to be a profession?
I was already thinking about that in ninth grade but probably afraid to talk out loud about it because my parents might not have been very happy. Boulder was really famous for this outdoor pedestrian shopping mall where in the summer you had street entertainers. My dad jokingly said, “Why don't you go out there and try to make some money?” And I was out there playing little pop tunes and started meeting a lot of musicians who offered me small regular gigs. I was very interested in mathematics and science, and I think it could have gone either way. I just wanted to play saxophone more.

What was your parents' reaction like? Was it a gradual thing they saw coming?
I think they were in denial, so when I started talking about it, they would just ignore it. When we really started talking about college, and I took the PSAT, my Dad said, “These scores are good,” and I said, “It doesn't really matter; I am going to music school.” And he was like, “Oh no, you’re not!” For my father, it was important for him to see documentation: if I came home with awards, that was good, another authority saying I am good at this.

Your music reflects your identity as an Indian-American. How does it do that? How do you meld those identities?
I grew up in a white community and in a lot of ways it was just easier for me to think of [myself] as being white as a survival skill. It was only later that I realized I was neither black nor white and had that identity crisis. To what degree am I American, to what degree do I relate to ancestry? I don't speak Kannada. How do you call yourself Indian if you don't speak your parents' language?

As far as Indian music goes a lot of people would assume I was an expert on Indian music because of my skin color and my last name. One of the huge things for me was Berklee [College of Music in Boston] sent a student band to India I was a part of. I heard a lot of great Indian classical music and was really inspired.

It is very important to me that Indian culture not be exoticized, that it has to be a real synthesis, playing together, not just playing in the same room. I have always avoided the word “fusion” because it always connotes exoticism. Me and Vijay Iyer, we pretty much blazed all these trails together and kind of made it possible for Indian-Americans to feel at home in Western music. We had no role models to go by.

What do most people not understand about jazz?
When people hear the word ‘jazz’ they either think Kenny G––which is not jazz, it's more like pop––or they think it’s music grandfathers listen to. They don't think of it as music that occurs now. Another issue is, jazz is placed in a high-art sort of category. I think people feel like they have to have a background to appreciate jazz, and I don't think that is the case. There's a lot of joy and power and energy that has nothing to do with ‘understanding the music.’ 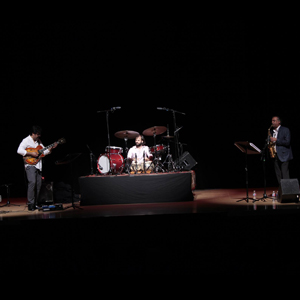 Can you talk a little about the Indo-Pak coalition band you have created?
I met Rez Abbasi, an incredible Pakistani-American guitarist, and Dan Weiss who is one of the best tabla players in North America. The only person playing an Indian instrument is not Indian; he's a white Jewish guy from New Jersey and the two brown guys are playing saxophone and guitar. It is always sad to me that Rez can't get a visa to go to India—his passport says born in Karachi. The cultural makeup of the band speaks volumes to what it means to be brown in America.

One of the compositions you played is nominated for a Grammy this year. How did that come about? [The interview was done before the composition won the Grammy].
Arturo O’Farrill is this amazing band leader and composer here in New York, his dad Chico O’Farrill is one of the most important importers of Cuban music to America. Apparently Arturo was driving through Michigan and there was an interview with me on NPR and he was so blown away that he had to pull over and listen. I got an email saying “Arturo's writing a piece and would like to feature you—would you like to do it?” We have since become great friends.

What advice would you give Indian-American kids interested in music or the arts?
Having integrity and developing a personal individual sound is very important. The world doesn't have any room for copycats anymore. You have to put in the hours; there’s no reason to not be the best you can be. If you really are doing that, the world will listen. There are very few people who are doing exceptional things that go ignored.