TalkTime: A Champion for Immigrants 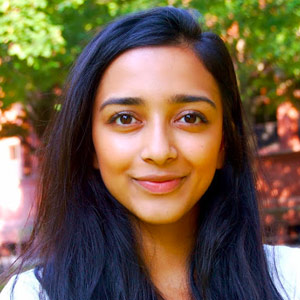 Tara Raghuveer, 26, is Deputy Director of the National Partnership for New Americans, a nonprofit that’s been active in the bruising 2016 election. The Harvard grad talks about, among other things, why she turned down a hedge fund’s job offer to be a part of this national initiative and what her Wednesday playlists are all about.

You mentioned that the past two weeks have been crazy for you. Is it because of the election?
We have had a concerted campaign to help people become citizens so they can vote, and obviously the extremely divisive nature of this particular election has increased the urgency of that effort. We recently discovered that there’s been a massive backlog in the federal agency that processes the naturalization applications. So we wrote a report about that, got The New York Times to cover it, and I’ve been dealing with some of the fallout.

You immigrated from Australia with your family. Is that right?
That’s right. I actually had a really interesting childhood that was really great, but almost none of it put me in touch with my Indian-American identity. That’s actually been sort of a relatively new exploration and discovery for me. I was born in Australia where my parents moved after completing their medical training in Mysore. We finally came to the States in ’96.

Are you able to draw the line between what you graduated with at Harvard (social studies) and what brought you to where you are now?
I grew up in a community in Kansas City that was pretty privileged across the board. I rediscovered a photo from 2006 when I was on the cross country team. It’s so striking to me now, but it was not even on my mind then—I was the only brown person in this photo. I didn’t really have a political framework and I didn’t understand my political identity until really recently, and it’s still a process that's ongoing.

I worked at a hedge fund before my senior year in college and I had a really good experience there. But the notion of making more money for already wealthy people was not motivating. I was sitting on that offer for a couple of months and I started doing my interviews for my thesis and that put me in conversation with poor people for the first time. I was sitting across the table from folks who by no fault of their own, but rather by circumstance were in these lifetimes of poverty, trapped in them. At that point I started to search for other paths. It wasn’t easy because there isn’t really a direct path to doing good work in the social justice arena. One critical thing a professor told me at the right moment when I was considering all of this was, I was going to be the luckiest person my age in the world: I was about to graduate with no debt, no dependents, with a Harvard degree, which for better or worse carries a lot of weight and significance in this world. So if I couldn’t take a risk, who could? Those words landed on me at exactly the right time and gave me the audacity to do something a little bit different.

Is it hard to do the kind of work you do, where immediate results are not immediately apparent, day in and day out?
It is, but it’s challenging in a really amazing and inspiring way. Learning so many stories is a motivating force that keeps this work from wearing on me and can be really sustaining in the face of politics as we know it right now.

Tell me about this music playlist that you assemble every Wednesday.
I’m so glad you asked about it—it’s my obsession. It’s a Google group, and every Wednesday I send a prompt at the beginning of the day to this list and throughout the day people respond with music that matches that prompt. It’s the one consistent thing I do week by week because my job involves much travel and different types of work. In that way it’s kind of meditative and restorative for me.

What’s your advice for kids?
Take risks to do the things that really scare you, especially if you come from a place of immense privilege.
Build intentional spaces in your life, and be in touch with the people who really matter.
The third nugget that I will leave with you is the importance of having a conversation with yourself and the people around you about your identity.