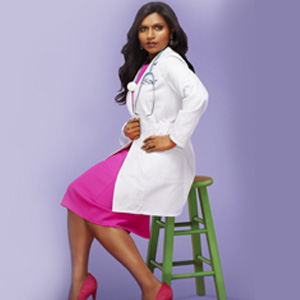 Mindy Kaling is not only creating one of the first postmodern romantic comedies on television, but she’s doing it without the skinny blonde actress. She breaks new ground by creating a chubby Indian-American character whose significant flaws make her three-dimensional and relatable.

In a recent issue of The New Yorker, writer/actress/producer Mindy Kaling dissected the female types in romantic comedies, noting her love for the genre: “I regard romantic comedies as a subgenre of sci-fi, in which the world operates according to different rules than my regular human world. For me, there is no difference between Ripley from Alien and any Katherine Heigl character. They are equally implausible. They’re all participating in a similar level of fakey razzle-dazzle, and I enjoy every second of it.”

Only someone who absolutely loves romantic comedies could make fun of them as artfully as Kaling does in her new show The Mindy Project. This summer, Nora Ephron, the witty author and screenwriter who defined romantic comedies for a generation, passed away. The opening to Mindy Kaling’s new television sit-com The Mindy Project pays tribute to Ephron with a sequence to which many thirty-something professional women can relate: a history of watching romantic comedies. While many professional women who jump from school to a high pressure career don’t have time for a relationship, a good percentage do have time for the tension release and fantasy that television provides and it’s those viewers to whom Kaling’s show should especially appeal.

A capsule summary shows us that Mindy (Kaling’s character is named Mindy, too) arrives at the present day by imbibing so many romantic comedies that, when stuck in an elevator with an attractive doctor, she thinks “Met in an elevator, my hair came undone? Are you kidding me? I’m basically Sandra Bullock!” Her quaint “how we got together” story is turned on its head when we learn that the doctor is now marrying someone else. After giving a nasty toast to the newlyweds, Mindy bikes drunkenly into a swimming pool and winds up talking to a mean Barbie doll.

From there, romantic comedy tropes continue as we meet the advice-giving best friend with kid, the hot British doctor, the nasty colleague, and the blind date. In the first ten minutes alone, I saw references to You’ve Got Mail, Bridget Jones’s Diary, Ally McBeal, My Best Friend’s Wedding, and Clueless. I’m pretty sure there were more there, but there were too many in the pastiche to pinpoint. Many of Kaling’s references were themselves referring to their predecessors, Jane Austen, Shakespeare, and movies from Hollywood’s Golden Age, but none quoted from their predecessors as cleverly as she does. Nearly every element of the show was familiar, but in the best way. Most of the humor in the show springs from Kaling’s gentle skewering of our expectations.

What’s really interesting about the show is that Kaling is not only creating one of the first postmodern romantic comedies on television, but she’s doing it without the skinny blonde actress we would have seen if this show were created in the 80s, 90s, or 00s. She breaks new ground by creating a chubby Indian-American character whose significant flaws make her three-dimensional and relatable. Like Lena Dunham in HBO’s Girls whose comedic material is similarly personal, she has the bravery to address the fact of her non-skinniness on air. Unlike Dunham’s character Hannah, Kaling’s character is confident.

In Kaling’s endearingly awkward character, you can see her roots as a writer on The Office, a show that in its best moments gave us comedy that felt like it arose more organically than your average network sit-com. Like Steve Carell’s Michael Scott, Kaling’s Mindy is often socially clueless and politically incorrect. But as you might guess from her Twitter persona, she’s also very likeable.

Besides parodying rom-coms, the pilot of The Mindy Project makes funny observations about doctors, the healthcare system, workplaces, and blind dates. Unlike the romantic comedies to which it alludes, The Mindy Project aspires to a mix of embarrassing vulnerability and faux pop-edginess (MIA’s “Bad Girls” plays in the soundtrack). Like Kaling’s memoir, it includes humor- ous cultural criticism. Most of the pilot wasn’t funny in the laugh-out-loud sense, at least not to me. Most of it was funny the way that Jane Austen is funny—in the social satire sense. The pilot modernizes the premise of Austen’s Northanger Abbey, which poked fun at young women who internalized the Gothic novel. Instead of satirizing the craze for Gothic novels, Kaling makes fun of young women who internalize romantic comedies.

The show is not flawless. Two jokes in particular, one about Serbian war criminals and another about burqa, fall flat. It is only after I watched the show a second time that I realized that Kaling was making an amusing observation about the state of racism today—instead of fixing racism, even people who are the subjects of racism or cultural prejudice engage in it.

But if a sit-com joke requires that much thought, it might not be as smart and funny as intended. And maybe it’s not very successful as an observation either. Hopefully there will be fewer ham-fisted ethnic jokes through the season.

When Harry Met Sally, the classic story of friends turned lovers, plays in the background of a scene with Mindy and one of the doctors. In a movie like Sleepless in Seattle, you could predict the last scene because of an involved earlier conversation between the women about An Affair to Remember. Critics of romantic com- edies often point to how simplistic, symmetrical, and predictable they are as a sign of their inferiority. It’s a testament to the creativity of Kaling’s pilot that I don’t know whether her character will end up with the doctor she watches the movie with or her blind date (well-played by Ed Helms, also of The Office) or a completely different character.

Pilots don’t always tell the truth about a show’s upcoming season. Most comedies get better with time, as you get to know the character and inside jokes develop. Willa Paskin, the television critic at Salon.com has likened the pilot to a book jacket, rather than a first chapter. This “book jacket” was very promising, both as a comedy for all Americans and for its social impact on the representation of Indians in mass media.

Equal parts acidic snark and sugary earnestness (and sometimes both simultaneously), The Mindy Project promises something above and beyond razzle-dazzle. You can watch it on Fox’s Tuesday line-up.

Anita Felicelli is a writer and attorney who lives in the Bay Area. She is the author of the novel Sparks Off You and other books.