Home > Magazine > Features > The India We Left Behind: My Motorcycle Days in Delhi

The India We Left Behind: My Motorcycle Days in Delhi 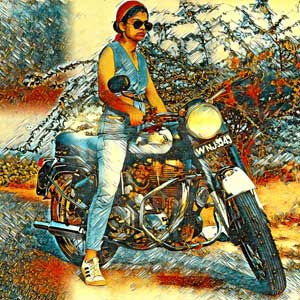 The mere fact that she was riding a bike in those days made her a renegade. The author’s “motorcycle dairies,” of sorts, make for a delightful nostalgic ride.

I looked at the circle of faces around me. Their expressions were set—grim and disapproving. I had no doubt that these well-wishers had my best interests at heart, but for once, I was in no mood to give in to their arguments.

“How about a moped?” proposed my sister.

“A moped!” Forget the vehicle in question, even the word ‘moped’ is a far cry from a motorcycle—it lacks gravitas.

“A scooter? Isn’t that safer?” offered another voice in the room.

“With its tiny wheels? Nah, scooters were for the staid office-goer, with a drab briefcase on the foot-rest.”

“My friend’s daughter rides a Kinetic Honda, she says it’s easy to start,” now it was mother’s turn.

A scooter that starts with the push of a button? That sounded so boring compared to a motorcycle with a kick start. How could I explain to my mother that after learning to ride on a heavyweight like an Enfield Bullet, with its quirky gear shift and a vicious back kick, the 100 cc I was proposing was very tame?

Since my father had passed away a few months earlier, maybe my mother felt that she did not quite cut an authority figure. So she enlisted the help of my chachaji (my father’s brother), who called me, and the argument against a motorcycle boiled down to this—it’s not a lady-like vehicle.

Yes, a scooter did lend itself to wearing saris but the vehicle didn’t have the required pizzazz. It was far from the image that had started this desire. I was in high school and my attention was not in the classroom. From the window I could see the small parking lot beside the sports field. A figure clad in jeans and jacket rode in on a bike and brought it to a smooth halt. The helmet came off and I recognized the face. This was our old head girl! And this was a time when one did not see women riding motorbikes, even in TV ads.

Eventually, the family came around. My sister found a colleague at work who was willing to part with his old motorcycle at a price that was friendly to my student budget. It was a Kawasaki Bajaj RTZ, well-loved among bikers for its ‘big bike’ feel in a small frame.

With my own set of wheels, I hit the Delhi roads with a new enthusiasm. Friends who move to Atlanta are often annoyed by the way people drive here. For me, this city has very organized traffic. The way we allow a two-wheeler to share the same road here is a far cry from the reckless dance that bikers are forced to engage in in Delhi, weaving in and out of traffic. In the urban jungle that is Delhi, might is right.

During the time I rode my motorcycle, Red Line buses prowled the roads. To the uninitiated, these were private bus operators, permitted to ply alongside public buses on city routes to ease commuter woes. The Red Line buses lived up to their name. In their mad rush to get more passengers than their competitors, they sped along with reckless disregard for traffic rules and often left behind a trail of blood.

Not only were the buses imposing because of their size and color, they also came with a special audio feature. The bus conductor would lean out of a side window, almost half hanging out of the vehicle, as he banged on the side of the bus, rattling off a list of the stops at the top of his voice. The conductor was a self-styled navigator, too, and at various moments in the journey he would use this particular communication method to very good effect, hurling the choicest of insults at other drivers on the road. Once, as I turned from one main street into another, a loud clanging nearly threw me off my bike. A Red Line roared past, the conductor leaned out of the window, and yelled almost into my ear, “Hat ja machchar!” Translated loosely, that would mean “Shoo, mosquito!” but it does not convey the imperiousness of that command.

Despite all her trepidation, my mother once agreed to be a back-seat rider on my bike, to track down a government officer in a nearly inaccessible location. It took some doing to talk her out of sitting side-saddle with her sari. She had to let go of the six yards of cloth for one day and borrow my salwar kameez. We bumped along the small lanes of Kapashera village, in search of the district office where we could get the family ration card changed to her name.

With my student days behind me, now I rode my motorcycle to work. In my riding outfit of pants, jacket, and helmet, I was often addressed as “bhai saheb” (brother) by parking attendants.

On my way back from work one day, I stopped at a red light, one intersection away from the Vasant Vihar turning at the Outer Ring Road. As I leaned on one side to maintain my balance, I felt a hand on my shoulder and a weight land on the back seat. I did exactly what an experienced biker would do—I yelled and let go of the bike! As the bike slowly keeled over, I turned around to see the shocked face of a traffic policeman. Only then did his words sink in—he had asked me if I could give him a ride till the next turn. Many a time, the traffic cops who manned intersections did not have officially issued vehicles and had to rely on motorists to get them from one crossing to another. By the time I straightened my bike, the policeman was on the other side of the street. I saw him walk away quickly, turning to look back every now and then, a stricken expression on his face.

I rode my bike in Delhi for years without incident, save one.

“Why don’t I follow you on my bike?” A completely hare-brained idea that I put to effect immediately. I was to follow a friend’s car to the other end of town, along roads that I was not familiar with. This was pre-GPS, pre-smart phone era and very soon I lost track of the car I was to follow. Lost, in the fading twilight, I made a wrong turn and ran smack into a traffic cop’s white Bullet motorcycle. The cop not only helped me straighten my bike but also did not write me a ticket. More than my incoherent babble, I think what moved him was the sight of my tiny 100 cc with its broken headlight against his 350 cc Enfield that looked unscathed from the incident.

Now based in the Atlanta area, Aruna Padmanabhan is a freelancer who writes about the diaspora from having lived in India, China, and Singapore.