Home > Magazine > Features > The Long and Short of It

The Long and Short of It 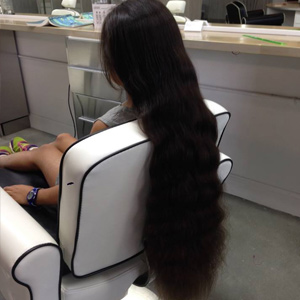 I waited seven-and-a-half years before I cut my youngest daughter’s hair for the very first time. Until then, she’d never even had a trim. Her dark brown tresses billowed past her bottom, extending all the way to the backs of her knees when wet. Those uneven, wispy ends embodied the same newborn hair that once tickled the rolls of fat along the nape of her neck. Running my fingers through them transported me back to those sweet months when her little head fit under my chin.

I did not plan on delaying her haircut for so long. But given my track record, it’s no surprise. My oldest daughter was six years old when we chopped off and donated 10 inches of her locks. My middle daughter, who detested elastics and ties, only made it two-and-a-half years before we shaped her shoulder-length tresses into a chin-length bob.

Contrary to popular belief, my youngest daughter’s Rapunzel-like mane was easy to take care of. She wore it in a braid, day and night. That thick, single rope became her trademark. It traced the length of her back like a second spine. It swished from side to side like a windshield wiper as she rode her bike around the neighborhood. When we all went swimming or hiking, I’d coil it up into a bun, like a snake in a basket. Every morning, we’d simply disentangle her slept-on, frizzy braid, wet it, and rebraid it into a tighter, sleeker version of itself.

When she started kindergarten, I asked her if she wanted to get it cut. “No, Mama,” she replied resolutely. “I love my long hair.”

Beginning in first grade, though, I noticed her sideways glances to the other little girls with short crops or layered locks. My daughter asked me once why she couldn’t wear her hair down like her friends. “It will get too tangled,” I said. She chewed on my words carefully, twisting her rosebud lips, furrowing her eyebrows like a wrinkled bed sheet. But after a moment, she relaxed her expression and ran off to play with the dog.

I knew then, though, that a seed had been planted. It wouldn’t be long before she’d want to let it go. Before I’d have to let it go.

My favorite years as a parent are when my children are between ages two to eight. I love teaching my daughters how to read, how to ride bikes without training wheels, how to smash avocadoes to make guacamole. Those precious years make up a world of Charlotte’s Web, dress-up, blowing bubbles, molding play dough and drawing with sidewalk chalk. When my youngest daughter turned seven in March, a heaviness settled in my gut. I knew my time as the parent of a little girl was beginning to come to an end. In three short years, I’d have a preteen, in six years a full-blown teenager. Her days of hoola-hooping in the driveway, of running through sprinklers, of playing Shoots and Ladders were numbered. Soon, she’d be sitting around with her friends on the back deck, discussing bands I’d never heard of and video games I’d never understand. 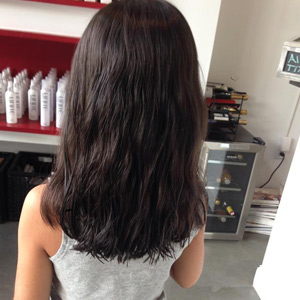 Perhaps a part of me had held onto her hair, and the idea of her hair, because I worried that such a drastic change might cut short her time as my last little girl, and usher her even faster into young womanhood.

We scheduled the appointment at the beginning of this summer at a hair salon down the street. Her sisters went first, the eldest again donating several inches, the middle child getting just a trim, followed by my littlest girl. She stood before the mirror, perfectly still as her locks were divided into four sections, secured in rubber bands, braided, and then cut off 15 inches from the bottom, one at a time. I took several photos and a video, but not even my careful documentation could accurately capture the transformation I’d witnessed. A certainty and a confidence I hadn’t seen before radiated through her. On the outside, she was just a kid with a new haircut. On the inside, she was a young lady who had made, for the first time, a very big decision all on her own.

Afterward, I laid each of the four braids down on tissue paper and rolled them up before sealing them in a plastic bag. While I paid the bill, my baby twirled in front of the mirror, her neat, blunt ends whipping across her bright, smiling face. She reminded me of Lynda Carter as she spun into Wonder Woman. She had never looked more beautiful. Her eyes lit up like stars. The plaits of hair now framed her face like the petals of a flower.

As we drove down the road to the mail center, I thought about how childhood milestones aren’t just the big things in life––the first solid foods, the first steps, the first words. They inhabit the smaller more subtle changes, too. The ones that sometimes only a parent can see.

We addressed a large padded envelope to Wigs for Kids. The weight of my daughter’s braids, as I laid them inside, felt light, like doll hair, as if they’d never been attached to her head.

When I sealed the package and handed it over to the clerk, I imagined the truck that would pick it up later that afternoon, the airplane it would board, the fingers that would weave the hair into a wig for a child who needed it more than my daughter ever had.

As we headed back home, I caught a glimpse of her in my rearview mirror gazing out her window, her damp locks kissing her collarbone. And I thought about her own journey, her evolution from infant to little girl, from little girl to beyond, and all the other dazzling, delightful travels I would be lucky enough to witness from the passenger seat.