The Politics of Racial Identity 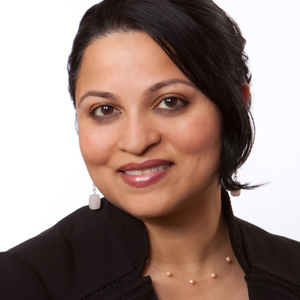 Through her book—We Too Sing America: South Asian, Arab, Muslim, and Sikh Immigrants Shape Our Multiracial Future—lawyer-activist DEEPA IYER makes a compelling case for why South Asians can’t afford to hide behind the privilege of the fabled “model minority” tag.

In 2008, America elected its first black president. In 2016, a woman is likely to win the Democratic Party nomination to run for president. And yet these milestones, groundbreaking as they are, could be deceptive if used to make a case that American society is therefore now post racial and post discrimination. Ugly realities persist of hate crime, pervasiveracism, and economic inequality that continue to widen the chasms between rich and poor, rural and urban, immigrant and citizen.

Through a combination of storytelling and policy analysis, Iyer argues that minorities should engage in the politics of identity to proactively build an American future where cultural differences are celebrated and embraced.

Across the Atlantic, as Europe reels from terror attacks, the spirit of multiculturalism is severely threatened when the terrorists are the purported “other,” that is, of a different skin color or faith. At home, high pitched campaign rhetoric has stoked the embers of an ever-present yet muted prejudice towards immigrants and minorities to a level that may prove to be antithetical to the very foundations of American society.

In We Too Sing America: South Asian, Arab, Muslim, and Sikh Immigrants Shape Our Multiracial Future, lawyer-activist Deepa Iyer chronicles the struggles and resistance of minority groups in a post 9/11 America against a state that is at once a defender of minority civil liberties and persecutor of those very minority groups. Through a combination of storytelling and policy analysis, Iyer argues that minorities should engage in the politics of identity to proactively build an American future where cultural differences are celebra ed and embraced—America not so much as the melting pot but as the salad bowl.

Iyer grew up in Kerala, India and moved to Kentucky at the age of 12. Iyer says, “Part of my racial consciousness comes from moving at that age to the American South.” Race in the American Southwas presented as binary, black and white and so,“I was confused for a period of time, growing up, trying to figure out who I was.” These childhood experiences, Iyer argues, were instrumental in shaping her world view and value systems, something that comes to bear in We Too Sing America. 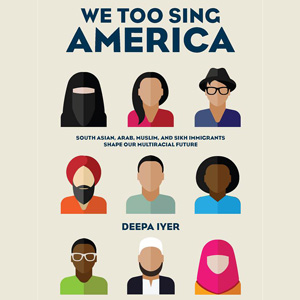 When 9/11 happened, Iyer was working as an attorney at the Department of Justice in Washington, D.C. Immigrants like her went through a process of what she calls, “double grieving”—grieving for America as a country but also for the many immigrants who were targeted by reactionary law enforcement. Iyer eventually moved to SAALT (South Asian Americans Leading Together), a national nonpartisan nonprofit advocacy organization. In 2014, Iyer stepped down from her role at SAALT to concentrate on chronicling the stories of struggles,resistance, and activism amongst South Asian, Arab, and Muslim communities in the US.

In the book, Iyer argues that immigrants and minorities have an important and active role to play in society as America becomes increasingly racially diverse and is soon poised to become a majority minority state. “Situating ourselves as communities of color is very important,” she says, “to dismantle the racial ladder that exists in this country.” Asians are invited to climb the ladder to “honorary whiteness,” thus undermining any natural solidarity between minorities, in Iyer’s view. Likewise, Iyer argues in the book, it behooves South Asians, as minorities, to grapple with the impact of systemic racism not just on black communities but also other minority communities. This is not to say that communities should not aspire for more; Iyer argues, “climbing the socioeconomic ladder is not the same as climbing the racial ladder.”

Asian Americans, in aspiring to the model minority myth, may wittingly or unwittingly perpetuate negative stereotypes of other minorities. When some minority groups oppose immigration reforms that might benefit other minorities on the grounds that they earned it so others cannot get a “free ride,” Iyer suggests, this is an instance of climbing the “racial ladder.” “Indian Americans are amongst the top ten undocumented populations in this country, so opposing immigration reform might hurt our own community members,” Iyer argues.

We Too Sing America is at its elemental level, a call to action—an urgent clarion call to minority communities to wake up to the demographic tectonics in America. Activism, however, is not an easy sell. For many, it conjures up images of street marchers and anarchists. How then can South Asian community members, actively pursuing careers, family life, or education engage in activism? Iyer argues that even those minorities “who have made it” in American society have experienced a sense of “otherness” at some point: “a Bangladeshi Muslim doctor who is profiled at the airport or if your child is called a terrorist at school, even if it’s the best of schools….you feel it.” One way to address these issues in the larger society is to actively talk about it and engage others in the community, because “pretending these problems don’t exist will not make them go away.”

Iyer’s chronicling of the stories in We Too Sing America is an invitation to minority communities to find their own personal narratives in those stories and to respond to those struggles in a constructive manner. “Once people start caring about these issues that have affected them or one of their own, then there are several things they can do.” Start with race talks or conversations about race, Iyer urges communities: “Talking to family members about race can be very difficult. But engaging with family and youth, at temples and gurdwaras and with educators” is an important first step.

As the demographics of America changes, Iyer invites minority communities to actively engage with other communities of color, at an interpersonal level and through grassroots community organizations. Leadership matters, and community leadership matters more, Iyer contends, especially in these times of vitriol and mud slinging.

In a poem titled, “I, Too,” poet Langston Hughes writes,

I, too, sing America.

I am the darker brother.

They send me to eat in the kitchen

I’ll be at the table

“Eat in the kitchen,”

They’ll see how beautiful I am

Like the poem, the source of the book’s title, We Too Sing America is intentionally provocative and seeks to stir up in its audience a deep desire to actively shape America’s multiracial future.

Will walls go up on America’s borders? We do not know. Will Muslims be barred from entering the United States? One hopes not. But in this climate of strident and rabble-rousing rhetoric, a call to racial solidarity, interpersonal engagement and community leadership may not be so provocative after all.