Home > Magazine > Features > The restaurateur with the Magic Sauce of Success

The restaurateur with the Magic Sauce of Success 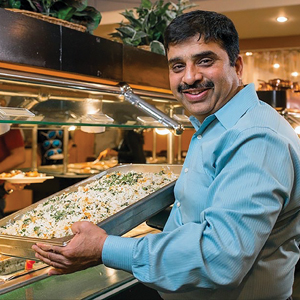 Starting with Madras Sarvana Bhavan over two decades ago, and now with his Madras Mantra and Madras Chettinaad restaurants, NARENDRA PATEL has found the elusive formula of consistent success in the challenging restaurant business. In the process, his influence on popularizing Indian cuisine in Atlanta cannot be understated. 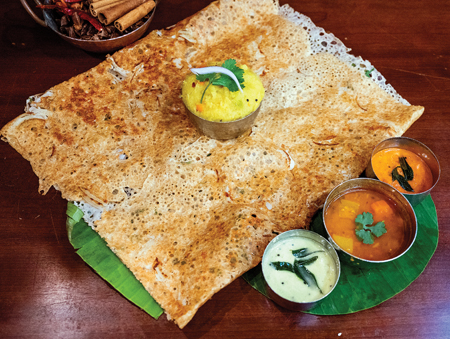 Patel’s restaurants have notched up the dosa game in Atlanta.

​Can there be a more convincing measure of a restaurant’s success than how consistently it pulls fullcapacity crowds that tend to overflow in the form of long waiting lists? Going by this all too real measure of success—a cash register on overdrive—it would be safe to say that Narendra Patel's restaurants in Atlanta have been among the most successful ones.

As a community watcher over the past three decades, I have been fortunate to witness the growing Indian restaurant scene in Atlanta. If I were asked to name the most commercially successful Indian restaurant in Atlanta ever, it would, no doubt, be Madras Sarvana Bhavan (MSB) in Decatur. In its heyday in the 2000s, MSB was a resounding favorite not just of the desi community but also of the mainstream Atlantans, especially the Decatur crowd, where the dining options have been quite exciting and competitive. On weekends, wait times of more than an hour were the norm at MSB. 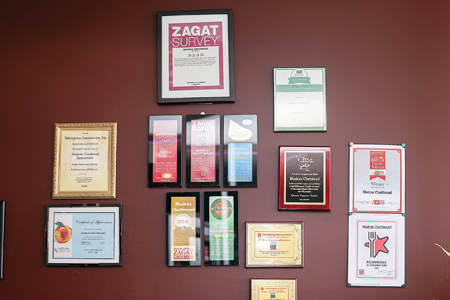 Patel has been able to maintain this streak of commercial success in his current restaurants—Madras Chettinaad in Alpharetta, and the two locations of Madras Mantra (Decatur and Marietta).

[Left] A wall full of accolades.​

Arguably the most popular Indian lunch buffet in town, Chettinaad’s lavish spread includes several choices of veg and non-veg North Indian curries; South Indian staples like dosa, uttapam, sambar, rasam; bhajiyas (fritters); Indo-Chinese offerings like baby corn Manchurian; a few choices of rice and biryanis; papads, chutneys, pickles, salad greens; and, of course, an equally good choice of desserts—both Indian and western. It promises peak gastronomic satiety to its enthusiastic regulars and newcomers alike. The bustling, sometimes crowded, buffet scene at the restaurant is largely made up of the professionals working in the large IT hub of Alpharetta, many of whom are single professionals getting their fix of desi khaana that they have left behind. 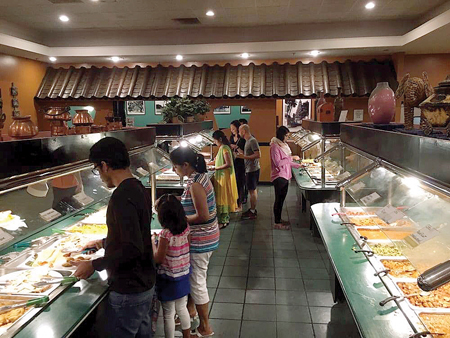 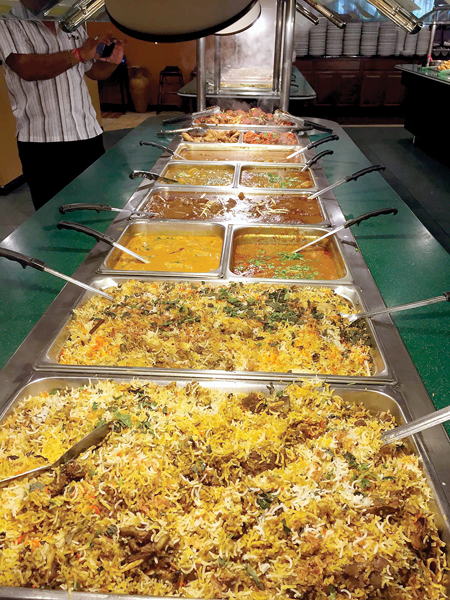 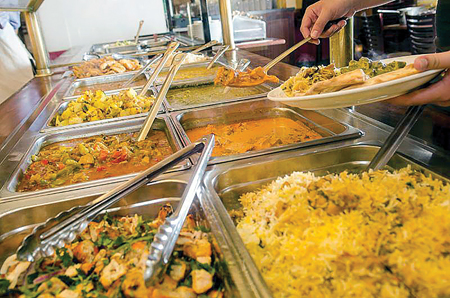 Madras Mantra has been picked as the best destination for dosas, time and again, by customers and critics both. Indeed, Patel’s restaurants have enjoyed not just commercial success but critical acclaim as well. Madras Mantra made it into Atlanta Magazine’s “50 Best Restaurants” in 2018. His restaurants have consistently been rated amongst the best Indian Restaurants in Atlanta by Zagat and Gayot, and have received rave reviews from local media such as The Atlanta Journal and Constitution, Atlanta Magazine, etc.

So, what is Patel's secret sauce of success? A rare combination of a natural affinity for cooking, a professional culinary background, and business acumen. Patel did not grow up with any particular interest in cooking. His interest sparked later in his youth after volunteering at many weddings in their Patel community as a “sous chef.” He discovered that he was naturally gifted at food prep and spice proportions, and was frequently sought out for his abilities in preparing large community meals. 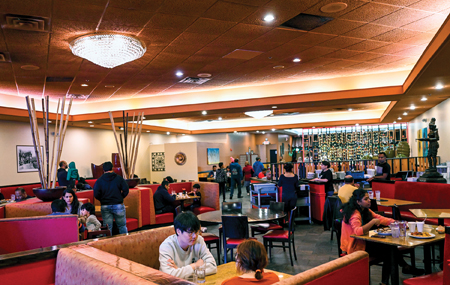 Even though he got a degree in biology, Patel continued to gravitate toward the food business. He ended up graduating from a culinary school in Mumbai, and soon after moved to the U.S., where he cut his teeth working at Indian restaurants in New York. Family ties pulled him to Atlanta. For the first couple of years, he and his wife both worked as lab technicians, cashing in on their science degrees. 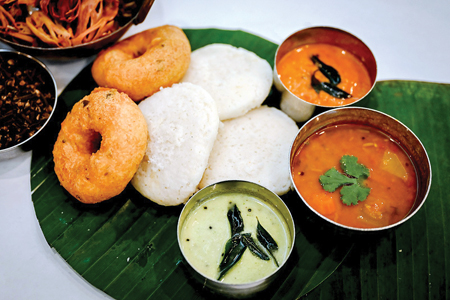 When the time came to plunge into the restaurant business, they started out by buying Madras Café, a modest establishment off Briarcliff Road, not far from Taj Mahal Imports, which used to be a hub for desi shoppers. The restaurant was popular with a small number of loyal clients, but had been struggling. Patel’s Midas touch started showing results in just about a year. Word spread that the small place had started offering the best dosas in town.

Having gained confidence, Patel was now ready to go bigger. With the launch, and, subsequently, the wild success of Madras Sarvana 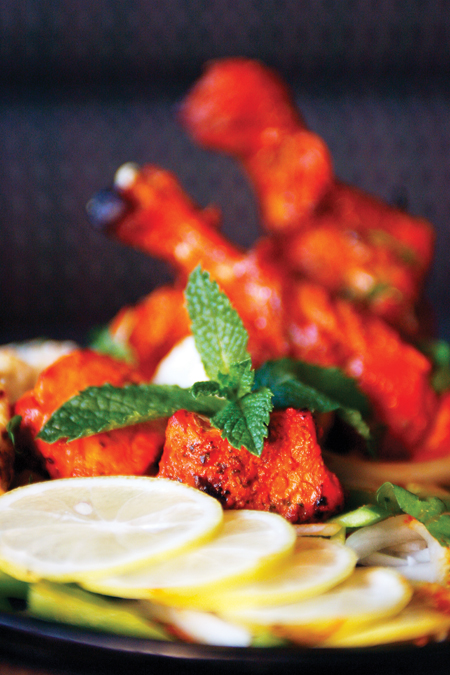 Bhavan in Decatur, Patel did not look back. MSB was the first truly chart-busting successful Indian restaurant in Atlanta. It was not only the favorite destination of Indians for South Indian food, but had also managed to cross over into mainstream popularity. Rave reviews became the norm, as it soon became a favorite among some of the city’s top food writers, and also consistently ranked as one of the top vegetarian restaurants in the city.

There have been incidences in his journey as a restaurateur that demonstrate Patel’s acumen in the business. When Ram 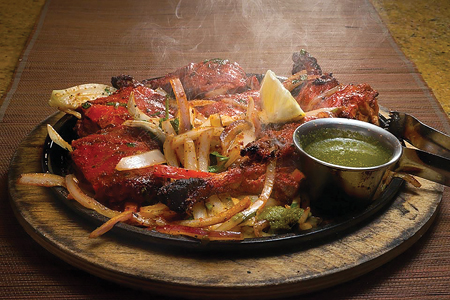 Nanjuda, his ace chef, had branched out to start his own South Indian restaurant, at the peak of MSB’s popularity, there was talk that it would hurt MSB. Not only did that not happen, but Nanjuda shut his restaurant in just a couple of years to come back to Patel. The pair, then, together took Madras Mantra on the same wild ride of success that MSB had enjoyed. Patel credits Nanjuda for the quality and consistency of the food they are able to offer. It is Nanjuda’s son, Ram, Jr., who is now successfully handling the Decatur location. Similarly, Patel has partnered with previously successful restaurant owners who had fallen on tough times to pull them up again.

“Treat everyone well,” is Patel’s humble response when asked about the secret of his success. “When I step into the kitchen, I'm just one of them. No one in my staff feels like the boss is around and so they have to behave differently.” There is unity in the staff, and they fill in for each other when needed, says Patel. He credits his wife, Sonal, for being a big part of their success. From day one, she quit her high-paying professional job to support their new restaurant business.

In terms of finesse with his craft, Patel doesn't rest on just his culinary degree from years past. His frequent visits to India are part of his continuing education: he tries out cutting-edge restaurants, visits caterers, studies the latest trends, and looks for menu ideas. He is also quick to embrace technology. Madras Chettinaad was the first, and perhaps the only, Indian restaurant in town that introduced a robot waiter. Both the Madras Mantra locations have table-to-kitchen computerized 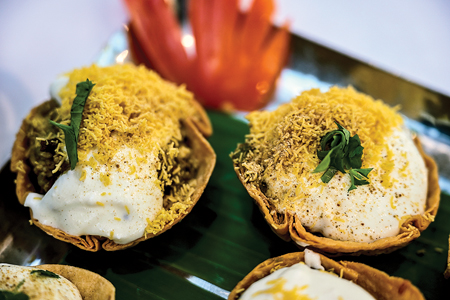 ordering, which pretty much eliminates any miscommunication regarding the food orders.

Not a big enthusiast of fusion food, Patel believes South Indian food, especially Chettinaad curries, are best in their unadulterated, authentic forms. As a Gujarati who grew up in Maharashtra, Patel is quite knowledgeable about regional cuisines— something that he credits for the success of his growing catering business. In the past year, he has catered close to 40 weddings and several other events. Many of these were for specific regional cuisines: Maharashtrian, Rajasthani, North Indian, Gujarati, and South Indian.

What's next? Patel feels that there is a great opportunity in the area of a Gujarati thali restaurant in Atlanta; but, he said, he would only take such a plunge if he's able to find a reliable chef. No matter what comes next, Patel has already proven himself as a restaurateur who has had an outsized impact on the Indian dining scene in Atlanta.

Parthiv N. Parekh, editor-in-chief of Khabar magazine, is the guest columnist this month. Food & Dining is hosted by Sucheta Rawal, an award-winning food and travel writer who has traveled to over 100 countries across seven continents, experiencing the world through her palate. She has been named one of the most influential cultural bloggers in the world for her blog Go Eat Give. Find her on social @SuchetaRawal.