Americana: The Dark Shadows of the American Dream 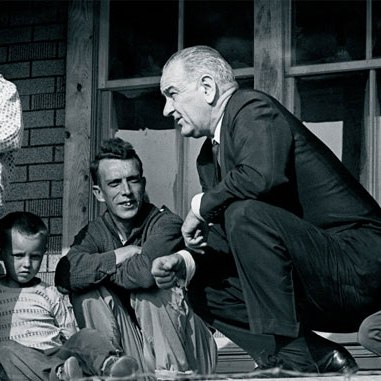 President Lyndon B. Johnson in 1964, at the Fletchers’ cabin in Inez, Kentucky, where he first announced his “War on Poverty.” (Photo: Corbis)

It is well past midnight and our taxi is speeding through the dark shadows of Mumbai’s nearly empty streets. The first mile or so of travel away from the international airport was pleasant enough, but then I see the backlit forms of humans and dogs combing a field of trash as if it were acreage on an Indiana farm. I want our driver to take us away—toward the “New India” of the travel brochures, if such a place exists.

Six years after that miserable first night in India, I am in Mayesville, South Carolina, photographing the crumbling buildings on the town square. A century ago this was a thriving community, but on this early afternoon, the only business open in the square is the liquor store.

Mayesville, South Carolina, once a thriving town, is one of the many that are crumbling due to poverty. (Photo: Bill Fitzpatrick)

A few young men who look like they should be working walk around without an apparent care, only occasionally glancing at me, the guy with the camera. They don’t bother me, but I am bothered by them. Why aren’t they working? What’s their plan? Are they on welfare? Are my tax dollars paying for their laziness?

If it is difficult for those of us who have lived or traveled in India, where poverty is far starker, to view the topic of American poverty fairly, it is doubly hard for me. Instead of blaming the struggles of today on the mistakes of past lives as some of my Hindu friends do, my first reaction is to blame yesterday’s decisions for today’s struggles.

Yet, when more than 15 percent of the population— roughly 50 million people—live below the poverty line, it might be helpful, perhaps even fair, if we move beyond our indifferences and first reactions to better understand those who live in the dark and forgotten shadows of the American dream.

Social scientists agree that one way of measuring relative poverty is to define households with an income of less than half of the national average as “poor.” For example, if the average American family earns $40,000, those earning less than $20,000 are poor. There are other ways of calculating poverty, but no matter the measurement, there is little disagreement that the American poverty rate is somewhere between 15-20 percent and that the gap between the “haves” and the “have-nots” is getting worse.

Another distinction between Indian poverty and American poverty is that it is hard to escape the former, while the latter is often hidden. It is possible, if not even probable, that in the routine of our American lives we will never see a poor person, a crumbling neighborhood, an outstretched hand. On a larger scale, I’ve lived in the shadows of the Appalachian Mountains nearly all my life, but the Interstate highway system allows me, all of us, to race around this huge poverty-stricken region that stretches from the Allegheny Mountains of western Pennsylvania to the Appalachians of north Georgia.

In the mid-1990s, however, I had no choice but to travel into and over the hollows and hills:

Into the Appalachian Mountains my former college roommate and I pedaled. We knew when we started our cross-country bicycle trip four weeks previous in Bellingham, Washington, that we’d have to travel through this rough land on our way to the Atlantic Ocean.

For the first time during our trip, people avoided making eye contact with us. In one Kentucky town, the locals, upon seeing two exhausted cyclists quietly eating peanut butter sandwiches on a city bench darted across the street as if we were lepers. We wanted, perhaps needed, support and encouragement, but received nothing but cold stares and open hostility. Away from the towns, vicious unchained dogs raced after us, hoping to knock us off our bikes in order to tear at our flesh.

After the trip, I read a few books on the region. When I learned how “outsiders” in the form of coal companies and labor unions had ruthlessly exploited the land and the people from 1900-1970, I was ashamed, for I had condemned an entire region, without asking one question, without considering “why.” The truth is the entire region has been exploited, the people don’t trust outsiders, and it is poor.

— An excerpt from Bottoms Up, America!
by Bill Fitzpatrick and Dave Fooshe

Poverty in America is indeed an enigma. In 1879, in his work titled Progress and Poverty, writer and economist Henry George wrote, “This association of poverty with progress is the great enigma of our times. It is the central fact from which spring industrial, social, and political difficulties that perplex the world, and with which statesmanship and philanthropy and education grapple in vain.”

President Lyndon Baines Johnson (LBJ) had Appalachia in mind when, in 1964, he announced a “War on Poverty.” He did so from the front porch of a poor home in Inez, Kentucky. LBJ, deeply influenced by the sweeping Depression-era social programs of President Franklin Delano Roosevelt (FDR), had visions of a “Great Society,” and eradicating poverty was part of his grand plan. As part of the initiative, LBJ set in motion a series of bills and acts, creating programs such as Head Start, food stamps, work study, Medicare and Medicaid, all of which exist today.

We must pursue poverty… wherever it exists—in city slums and small towns, in sharecropper shacks or in migrant-worker camps, on Indian reservations, among whites as well as Negroes, among the young as well as the aged, in the boomtowns and in the depressed areas. Our aim is not only to relieve the symptom of poverty but to cure it and, above all, to prevent it… We will launch a special effort in the chronically distressed areas of Appalachia.

Now, nearly 50 years and billions of dollars later, the problem is worse than ever.

David Brady is an Associate Professor in the Department of Sociology at Duke University, and author of Rich Democracies, Poor People: How Politics Explain Poverty. In the book, Brady studies poverty among all Western democracies. His conclusions are damning. Our poverty rate, a number he calculates to be around 20 percent, is two to three times higher than any other Western democracy. The gap, according to Brady, is directly attributable to the relatively small amounts of social services that our government provides to those in poverty as compared to countries such as Germany, Sweden, and Canada. Logically, Brady concludes that since democracies represent the will of the people, it is the people of the nation who must agree that poverty is not acceptable, that additional safety nets and government programs are the best way to create an equal-opportunity and inclusive society, a prospect that does not seem very likely in the United States of America.

Sean F. Reardon is a professor of education and sociology at Stanford University. Writing in the New York Times he notes:

The children of the rich perform better in school, on average, than children from middle class or poor families… Whether you think it deeply unjust, lamentable but inevitable, or obvious and unproblematic, this is hardly news. What is news is that in the United States over the last few decades these differences in educational success between high and low income students have grown substantially… Using information from a dozen national studies conducted between 1960 and 2010, I found that the rich-poor gap n test scores is about 40 percent larger now than it was 30 years ago.

In March of this year, my eighteen-month-long photography project among some of the South’s National Historic Register landmarks came to an end. It was perhaps a year into the journey, or maybe longer than that, when I realized that my lasting memory wouldn’t be of any one specific landmark, for as much as I had enjoyed, say, Sheldon Church, Buffalo Mill, or Magnolia Cemetery, the buildings would take a backseat to another story, a more lasting memory. In my travels, I have seen the physical and mental poverty of those men and women who live in the dark and forgotten shadows of the American dream, and such waste is my strongest memory, such is the story I wish to share.