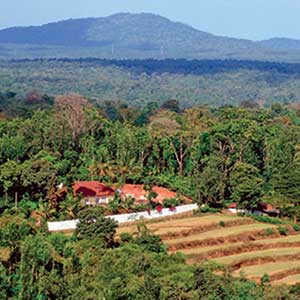 Kodagu—formerly known as Coorg—is a picture-perfect district in Karnataka that offers an embarrassment of riches, including lush green forests, coffee plantations, and breathtaking scenery.

There is not a single inhospitable family in Kodagu; everybody is a potential hockey star or army general; guns are as common as handkerchiefs; everything is different from the rest of India—the food, the customs, the settlements, the celebrations, the ozone layer. Everybody has a smile on their face, even the wild pig that is about to become dinner in a few hours.

The clichés are true. Jawaharlal Nehru, India’s first Prime Minister, thought so. As far back as in 1950, when the region was still called Coorg, he said, “Coorg has given great generals to the Indian Army. It’s noted for its choicest coffee and if I am permitted to add one more to these specialties, I can mention Coorg is famous for its beautiful and comely women.”

In the southern state of Karnataka, Kodagu is the most laid-back of the districts. The richness outside—the forests, the plantations, the rivers and hills—is reflected in the richness of the hearts of the Kodavas (or Coorgis, as they are sometimes still called). Visitors are quickly made to feel welcome, as homes, honey and hooch bottles are opened out to them. There is none of that tourists-have-ruined-our-beautiful-place complaint, so common in other regions of the country that burst into public consciousness after being hidden for long.

Tourism officials may call it the Kashmir of the South or the Scotland of India, but Kodagu is Kodagu and needs no artificial boost. If neighboring Kerala hadn’t thought of it first, this might have been named God’s Own Country—one where the Almighty himself (or herself, to be fair) might come for a holiday. The best way to enjoy Kodagu is to drive around, stop over at the many resorts, rest, and start again. Nothing repeats itself even over a week’s stay. 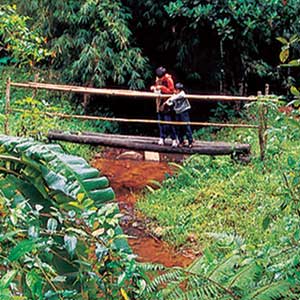 Cauvery is the sacred river that runs through Kodagu, often underground, sometimes surfacing as if to reassure the people that it is protecting them. Talacauvery, the birthplace of the river, is on the slopes of the Brahmagiri Hills, some 1,400 meters above sea level. At the foothills is Bhagamandala, the confluence of Cauvery and the underground rivers Kannika and Sujyothi.

Madikeri, the district headquarters of Kodagu, has its palaces and forts and temples, all of which are worth a visit, but these are no patch on the natural beauty of its waterfalls, ravines, flowers, and animals. You can trek, you can fish, you can take long walks, you can try and identify the various strains of color and smell or you can use one of the plantations as base and take in the surrounding areas.

The wonderful thing about a Kodagu holiday is that it caters to two extremes—those who are full of energy, want to see places, hug history and discover things for themselves, and those who believe in a more gentle, rest-rich approach to vacationing. 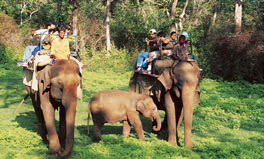 Ecotourism, the kind of tourism encouraged by resorts such as Orange County, is popular for this very reason. The city-bred are allowed to be one with nature during the day and return to the comforts of the well-made bed, hot food and more if they want to. It is an unbeatable combination. If you tire of the elephants, the birds and the streams, you can take time off to attend a wedding. 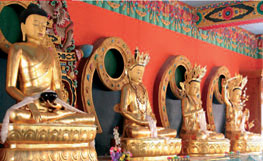 When a child is born, a gun is fired in the air to pass the message on to friends and neighbors. The Kodavas are allowed, by law, to carry guns without licenses—they actually worship their guns. The festival of arms, Keil Poldu, is celebrated in the first week of September and is a time for merry-making. 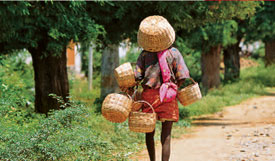 If you visit in April, you can witness a unique hockey tournament, with families playing against one another for the title. Each year it is hosted by a different family. Sixty families competed in the first tournament in 1997, and by 2003 there were 280 families in the fray. M.M. Somaiya, M.P. Ganesh and B.P. Govinda are only some of the players from Kodagu who went on to play international hockey, and, in fact, led India. Virtually every team in Bangalore, from school to club, has a player from Kodagu, and he invariably is the star. 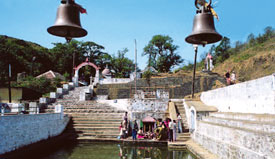 The Kodavas’ contribution to the Indian armed forces, too, is well-known. Field Marshal K.M. Cariappa and General Thimayya are probably the most famous among Kodava men in uniform, but Indians across the country have heard of the famed Coorg Regiment. 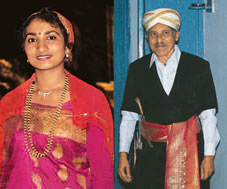 What makes the Kodava women so beautiful, the men such naturals at hockey and the soldiers so respected? Impossible to tell, of course, as you drive through Madikeri or stare at Abbey Falls. Is it the air? Is it the coffee? Is it the presence of so many natural phenomena in so small a space? Is it the advantage of being descendants of the Greeks who came with Alexander the Great, as some believe the Kodavas are?

We can leave the explanations to others. But for those who like the clichés to come alive when they visit a place, it is enough that Kodagu lives up to its reputation. Half a century after Nehru made his comment, it still holds good. And there is something comforting about that.