Home > Magazine > Features > The Godfather of Indian Spiritualism in America

The Godfather of Indian Spiritualism in America 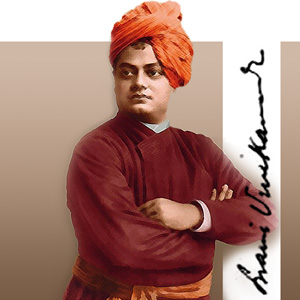 Swami Vivekananda, who bowled over Americans at the world’s first Parliament of Religions in 1893, went on to become a pioneering architect of Vedic philosophy in the U.S. It is thanks to him that, today, words such as karma, yoga, meditation, chakras, reincarnation, self-realization, avatar, enlightenment, God-realization, and guru have entered the American lexicon.

I am proud to belong to a religion which has taught the world both tolerance and universal acceptance. We believe not only in universal toleration but we accept all religions as true. —Swami Vivekananda

On 9/11/1893 a bell tolled opening the world’s first Parliament of Religions in Chicago. One by one various religious representatives read from prepared texts. Then, a Hindu monk in an orange robe stepped to the podium. Bowing briefly to acknowledge the Divine, he spoke from the heart, addressing the audience simply as “Sisters and Brothers of America.” Before he could say more, the 7,000 people present were on their feet, giving him a two-minute standing ovation.

Continuing, the Hindu monk invited all those present to embrace the Hindu virtues of religious tolerance, openness, and acceptance citing the “wonderful doctrine” in the Bhagavad Gita—Whosoever comes to Me, through whatsoever form, I reach him; all men are struggling through paths which in the end lead to me. Building on that sacred Hindu text, he said: “Sectarianism, bigotry, and its horrible descendant, fanaticism, have long possessed this beautiful earth. They have filled the earth with violence, drenched it often and often with human blood, destroyed civilization and sent whole nations to despair. Had it not been for these horrible demons, human society would be far more advanced than it is now.” 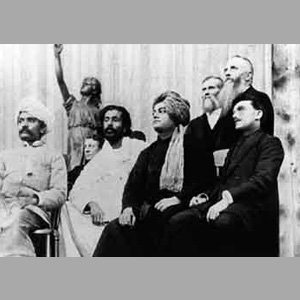 Right: At Parliament of Religions in Chicago.

He concluded with this optimism: “But their time has come and I fervently hope that the bell that tolled this morning in honor of this convention may be the death-knell of all fanaticism, of all persecutions with the sword or with the pen, and of all uncharitable feelings between persons wending their way to the same goal.”

It is a sad irony that exactly 100 years after Vivekananda’s hope that the Parliament would lead to the “death-knell” of religious extremism, the first attempt to destroy New York’s World Trade Center took place in 1993 when terrorists detonated a truck bomb below the North Tower. Moreover, on the same date, 9/11, but in 2001, the second, horribly successful, attempt took place!

After his short speech of less than 700 words, Vivekananda rose from obscurity to overnight fame. His subsequent addresses at the assembly were packed with eager listeners. When it was over, newspapers of the day wrote about him in glowing terms. The New York Herald editorialized, “Vivekananda is undoubtedly the greatest figure in the Parliament of Religions. After hearing him we feel how foolish it is to send missionaries to this learned nation.” Other newspapers declared Swami Vivekananda as “the greatest figure in the Parliament of Religions” and “the most popular and influential man in the Parliament.” 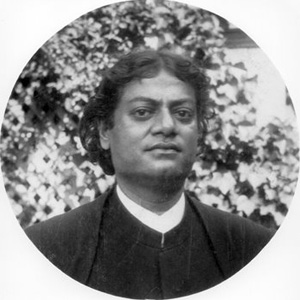 Vivekananda was born into an affluent family on January 12, 1863, in Calcutta. His birth name was Narendranath Dutta, with family and friends calling him Naren. A talented student, he graduated from the Scottish Church College. In addition to studying Western academic subjects, Naren also carved out time to study his own culture, specifically focusing on India’s great spiritual heritage.

While in his late teens, he began a spiritual quest and met Sri Ramakrishna, who would become his guru. Naren began to study with Ramakrishna in 1884, proving to be an exceptional student in the essentials of Hindu Vedic philosophy. Sadly for Naren, Ramakrishna became ill with throat cancer and died in 1886. However, the two years under Ramakrishna’s spiritual direction were powerfully formative for Naren. Anticipating his death, Ramakrishna asked Naren to continue his work. After Ramakrishna’s death Naren took formal monastic vows and adopted the spiritual name “Vivekananda” made up of two words: vivek, which is wisdom, and ananda, which is happiness. Thus, his name literally means “wisdom brings happiness.”

For the next two years, Vivekananda was spiritual leader for Ramakrishna’s disciples made up of sixteen men. They constituted the first monastic order of Sri Ramakrishna. In need of their own building, a devotee gave them a rundown structure that became the first headquarters for the monks of the Ramakrishna Order.

From 1888-1893 Vivekananda became a Parivrajaka, a wandering monk. Later, on January 27, 1900, before an audience in Pasadena, California, Vivekanada described his life as a wandering monk, explaining that it eroded his health significantly:
“It (wandering) tells on the body in the long run: sometimes one meal at nine in the evening, another time a meal at eight in the morning, another after two days, another after three days—and always the poorest and roughest thing. And most of the time walking, climbing snow peaks, sometimes ten miles of hard mountain climbing, just to get a meal. I would have to go from house to house to collect sufficient for one meal. And then the bread was so hard, it made my mouth bleed to eat it. I would put it in a pot and pour over it water from the river. For months and months I existed that way—of course it was telling on the health.”

Sometime in 1893, Vivekananda learned about the Parliament of Religions to be held in the United States and decided to attend. He felt that in making this long journey there could be two benefits—the first for American audiences to whom he could present the Vedic philosophy of religious tolerance, openness, and acceptance; and the second for the people of India as he could raise funds for developing and expanding the Ramakrishna Mission.

With modest financial aid from supporters, Vivekananda set sail for America. Upon arrival, everything that could go wrong went wrong for the Swami. He arrived in Chicago at the end of July, and learned that he was far too early. The Parliament was scheduled for September. Furthermore, he learned that delegates had to be credentialed in advance in order to participate, and that it was now too late to be credentialed and registered for the event. Complicating matters was the fact that Vivekananda had no letter from any Indian organization authorizing him to be their representative. So, he was in Chicago six weeks too early, without credentials, and with his money running out as expenses in America were far higher than he anticipated. Nevertheless, Vivekananda felt divinely called to be at this meeting and thus fully expected that the right doors would open. In fact, he later wrote friends saying: “I am here (in America) amongst the children of the Son of Mary and the Lord Jesus will help me.”

And that is precisely what happened. Divine providence appeared to favor Vivekananda several times. In Chicago, he was advised to leave for Boston to wait out the time because the cost of living was cheaper there. Vivekananda purchased a ticket and while on the train, his traditional Indian clothing piqued the curiosity of Kate Sanborn, an influential Boston socialite. She invited the Swami to be her guest in Boston. Sanborn enjoyed introducing the Swami to her wide circle of friends who included J. H. Wright, a professor of Greek at Harvard University. Professor Wright was deeply impressed by Vivekananda’s knowledge of Vedic philosophies and encouraged him to represent Hinduism at the Parliament of Religions. When Vivekananda explained that he lacked credentials, Professor Wright contacted leaders at the Parliament and Vivekananda was promptly credentialed and left for Chicago. 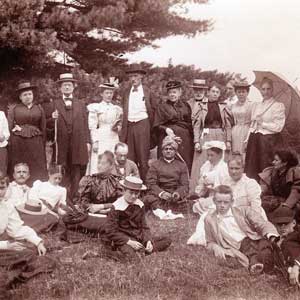 Swami Vivekananda, in 1894, with Sarah Jane Farmer, the founder of the Green Acre Conferences, and guests in Maine. (Photo: Eliot Baha’i Archives)

With his spectacular success at the Chicago World Parliament of Religions, Vivekananda began to receive and accept speaking invitations from diverse groups—churches, civic organizations, clubs, private gatherings. Soon he was delivering a dozen or more lectures weekly in American towns and cities, in private homes and public auditoriums. Everywhere he spoke, Vivekananda raised levels of interreligious awareness and appreciation along with explaining the basic principle of Hinduism in ways that were listener-friendly.

He remained in the United States for two years, lecturing extensively in the the Eastern and Central parts of the country, mainly in the cities of Chicago, Detroit, Boston, and New York. All the time, he regularly sent money back to India for the Ramakrishna Mission, from lecture fees and donations from American supporters. His lectures brought him two academic offers, one as chair of Eastern Philosophy at Harvard University and the other, a similar position at Columbia University. Though flattered by the offers from these prestigious institutions, Vivekananda explained he was a wandering monk and therefore, could not accept. His influence was widely felt. Harvard psychologist and philosopher William James, who was impacted by Vivekananda’s writings, quoted him at length in his own famous work, The Varieties of Religious Experience. After personally meeting Vivekananda, James proclaimed him “a very nice man; an honor to humanity.” Others influenced by Vivekananda were the novelists Gertrude Stein, Aldous Huxley, and Henry Miller who wrote in 1962 that “Swami Vivekananda remains for me one of the great influences in my life.”

Rev. Victor M. Parachin is a writer and minister based in Tulsa, Oklahoma.