Home > Magazine > Features > The Indian American: An Affair to Remember

The Indian American: An Affair to Remember 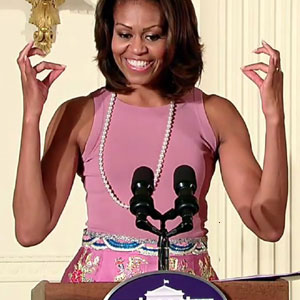 First Lady Michelle Obama demonstrates some of the hand gestures she learned at a workshop on Indian dance.

Atlanta’s own Viren Mayani recounts his visit as a guest at the Diwali celebration at the White House.

With timely precision, the invitees lined up at the gated southeast entrance for thorough security vetting. We were directed into the White House’s East Wing, where we got to socialize and enjoy a classical music rendition by two violinists and a bass performer. Rifka and I got to meet Nakul Dev Mahajan, one of the dance choreographers of the TV show So You Think You Can Dance.

At 3:30 p.m., we were escorted to our seats in the East Room for the festivities to begin. The program was called to order with a Diwali greeting from our host, Gautam Raghavan, the White House’s Public Engagement Advisor. He introduced Lt. Colonel Ravi Chaudhary of the US Air Force, who has more than 3,000 flying hours, including over 750 combat hours in Iraq and Afghanistan. 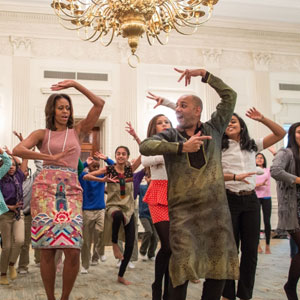 Michelle Obama tries out traditional dance moves, led by Nakul Dev Mahajan, a choreographer of the TV show So You Think You Can Dance.

Chaudhary welcomed First Lady Michelle Obama on stage to present her remarks. In a colorfully embroidered pink dress, Mrs. Obama recognized Chaudhary for his service to our nation and also recognized Kiran Ahuja, executive director of the White House Initiative on Asian-Americans and Pacific Islanders, for her leadership in the administration.

Mrs. Obama lauded Mahajan for conducting a Bollywood dance session for kids in the White House State Room, the first time such a session had ever been held in the White House. In tune with the festivities of the occasion, she demonstrated some of the hand gestures she had learned at the workshop, regaling the guests. 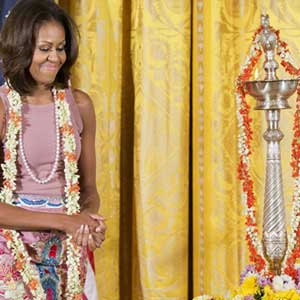 Sri Janakiram Marthi, priest at Sri Siva Vishnu Temple of Lanham, Maryland, recited the shlokas and presented Mrs. Obama a candle to light the neatly decorated brass lamp with floral accents. After she lit the traditional diya, Mrs. Obama was felicitated with a floral garland by Mythili Bachu, past chairwoman of the temple. Mrs. Obama concluded her presence at the festivities by stating, “I am so proud and so honored to be celebrating this beautiful holiday at the White House with all of you. I want to thank you for ever thing that you do for our communities and for this country. And I wish you all and all your loved ones a Happy Diwali and Saal Mubarak.”

Kiran Ahuja took the stage next, describing the true importance of a celebration like Diwali and what it means to the White House Initiative. “Although people of varying faiths and cultures celebrate Diwali in many different ways, the beauty of this holiday is its ability to unite people of different creeds and walks of life around the globe,” she said. “We’re gathered here today to celebrate light: the light that shines in each of us, that burns bright, and triumphs over darkness.”

Siddhartha Khosla and Jake Owen of Goldspot perform at the White House.

With a splendid reception to follow in the State Room, the formal festivities were concluded by music selections from Goldspot, featuring performers Siddhartha Khosla and Jake Owen. Khosla spoke of his roots and performed a song called “Cassette,” dedicated to his parents. It describes how he felt as a child when his immigrant parents, unable to manage the expenses, sent him to India to be raised by his grandmother. His mother recorded a message for him on a cassette that was sent back and forth. His emotionally charged delivery of a very personal song moved the audience. He also recited his innovatively created Diwali song and concluded with his version of the late Kishore Kumar’s “Ina Mina Dika,” which earned Goldspot a thunderous applause.

The White House chef offered us vegetarian delicacies with a very distinct and authentic taste, including mango soufflé, barfi, curried pilaf with cashews and almonds, mini uttapams with organic malaga pudi, papadums and puris, peas and potato kachoris with a tinge of cream cheese on top, pita chips with hummus, and a whole lot more. 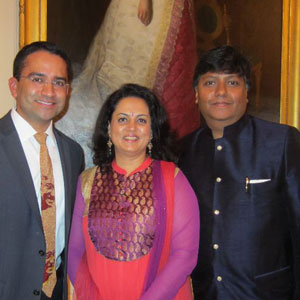 I take pride in sharing this not just because of the personal indulgence and pomp that Rifka and I enjoyed, but more importantly because this Diwali celebration at the White House marked the growing engagement of Indian traditions and culture in America. It was gratifying to listen to the words of the First Lady speaking about the festival of lights: “Diwali is a time for celebration. As Barack and I learned during our visit to India, it’s a time to come together with friends and family, often with dancing and good food. But Diwali is also a time for contemplation and reflection. It’s a time for us to think about our obligations to our fellow human beings, particularly those who are less fortunate than we are. And as we light the diya—the lamp—we recommit ourselves to the triumph of light over darkness, of good over evil.”

Viren Mayani is a senior contributor at Khabar who enjoys his several leadership roles in the Indian- American community.