The Making of a Divine Abode 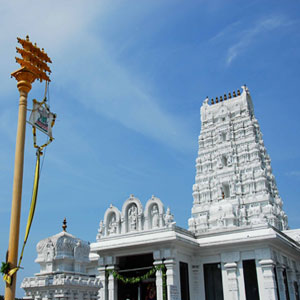 A look at the architecture and iconography of Hindu temples in North America through the eyes of Adrian Smythies, the author of The Venkateshvara Temple in Riverdale, Georgia.

Photo: The Balaji Temple of the Hindu Temple of Atlanta.

Driving down Georgia Highway 85 in Riverdale, south of Atlanta, the unsuspecting driver is sure to do a double take on seeing the pristine white projections of the Vishnu (Balaji) and Shiva temples, of which the former has dotted the landscape there for about 20 years now. Under the auspices of the Hindu Temple of Atlanta, these temples are akin to a slice of Chidambaram, Tamil Nadu—in the middle of this rural-to-suburban Georgia region.


The small but distinctive Garuda Temple in the form of a decorated chariot, set in front of the Balaji temple, serves as a befitting precursor of the art, architecture, and iconography of the various constructs of this temple complex that are a world apart from anything that its neighborhood had ever seen, or imagined it would ever see in its neck of the woods.

While this dramatic anomaly certainly lends intrigue to the temple, its marvel lies in the incredible imagination, resolve, and hard work that went into transporting the art and science of temple-building across the centuries and continents—from ancient South India to 21st century America. That is because temple architecture is governed by explicit rules laid out in the shastras and agamas (ancient Hindu texts). Translating these dictates across the hemispheres raises interesting questions and challenges.

It was just a matter of time before scholars—besides the trustees building these temples—took interest in this phenomenon of Hindu temple building in North America. In the last two decades dozens of temples of varying sizes and intricacies have been built on the continent—raising not only the curiosity of the lay passerby but also stoking the academic’s visceral urge to know about such a striking transference of heritage from the East to the West and from the ancient to the modern.

Adrian Smythies is one such scholar who has been studying the art and architecture of Hindu temples for years, and through his diligence and involvement, has elevated himself to an expert on the topic. Dr. B. K. Mohan, a founding trustee of the Hindu Temple of Atlanta, feels that Smythies has become an insider to the world of Hindu temple building, thanks to his all-out engagement with this world. “He travelled to India with Padmasri Muthiah, the Sthapathi (the master temple architect). He visited, at length, several temples in India to study their architecture. He spent time with the artisans working on the Hindu Temple of Atlanta,” observes Dr. Mohan.

The result spills into a 65-page paperback guidebook titled The Venkateshvara Temple in Riverdale, Georgia. Billed as a guide to the architecture and iconography of the temple, the book, Smythies believes, will serve those “who would like to enjoy a deeper appreciation of the timeless art expressed in the design, decoration and sculpture of this splendid building.” With over 50 illustrations, tables listing the sculptures on each region of the main hall, and a helpful glossary, the guide could be a treasure to both the pilgrim and the novice visitor.

In an interview with Khabar Smythies shared his knowledge, while offering a clarification to inform the conversation that follows: “‘Hindu temples’ encompasses an enormously large field. ‘American Hindu temples’ is almost as extensive. There are perhaps more than 600 temples in the United States; they occupy office suites, strip mall units, corner shop sites, converted warehouses, former churches and synagogues, utilitarian buildings without distinguishing symbols, new age fantasies and on through to great marble and sandstone palaces being fine replicas of traditional temples. Of all these, there are about 40 that have been built over the last 30 years in traditional Indian temple architectural forms. Three-quarters of these are composed in a variant of a southern Indian architectural language, which I have dubbed ‘Modern Dravida.’ All this preamble leads to the point: when I talk of temples, I am usually referring only to American Modern Dravida temples.”

Your interest in the architecture of Hindu temples seems a bit offbeat for a British national who is now an American resident. Can you share how this journey began?
I became interested in Hindu temple architecture about five years ago while I was studying for the M.A. degree in Art History at the University of Alabama at Birmingham. While always interested in art, I had never looked at Asian art and so decided to take a course offered on Indian Architecture. This introduction was broad in scope, covering the gamut from rock-cut cave monuments to Le Corbusier’s work in Chandigarh. It was a revelation. I wrote my dissertation in 2006 on the temple at Eads (near Memphis, Tennessee), and have been studying American temples ever since.

Was an interest in Eastern spirituality a cause or an effect of your interest in the architecture of Hindu temples?
The art came first, but a true understanding of temple architecture and iconography is not reached without knowing something of Eastern spirituality. I have had to research the beliefs of different traditions, the Sri Vaishnavas, Vaikhanasas, Gaudiya Vaishnavas, Smartas and so on, the teachings of the main acharyas, the connections between kula-devata (family deities) and their patrons, etc., because this is all expressed in the temples. And I am very aware of only having just skimmed the surface of a very deep body of knowledge.

How does the architecture of Hindu temples compare or contrast with that of churches or mosques in terms of spiritual influences?
My teacher Dr. Adam Hardy in The Temple Architecture of India (Wiley, 2007) discusses how architectural forms represent movement. He draws attention to how certain means of expressing movement—bursting of boundaries, splitting, multiple projection and interpenetrating elements in particular—are common to European Baroque churches and to Indian temples. Some medieval Indian temples use such devices explicitly. Hardy shows how temple shrines have a sense of movement that appears to originate at the tip of the finial on the tower and moves down and out, radiating all around from the vertical axis. The movement expressed in stone corresponds, to some extent, with the doctrines of the manifestation of the absolute through a series of emanations or vyuhas held by some traditions. In American Modern Dravida temples, the sense of movement is present but less all pervasive.

The geographical location of a place, its climate, and its hemispherical location, it may be safe to assume, play a part in informing the architecture of its structures. That being the case, would the rules laid out in the shastras and agamas be transportable to temples being built in North America?
Undoubtedly geographic location impacts the architecture of Modern Dravida temples. In the United States, the influence may be as prosaic as local building codes requiring a certain number of exits from a hall, as elective as devotees preferring air conditioning, or as obligatory as seeking protection from arctic winter climates.

Despite the appearances of some American Modern Dravida temples, the rules of the shastras and agamas are being followed. There are two points to make. Firstly, the ancient texts dealing with temple construction generally present guidelines rather than minutely specified rules. Temple architecture has evolved over time while remaining within the guidelines; compare the Shore Temple (ca. 730) at Mallapuram (Tamil Nadu) with the Kambahareshvarar Temple (ca. 1200) at Tribhuvanam (Tamil Nadu). Temple architecture continues to do so.

Secondly, in many eclectic American Modern Dravida temples, the shrines themselves replicate miniature temples and it is these that conform to the orthodox codes. The rest of the complex colloquially called ‘the temple’ by devotees, which may include worship halls, entrance halls, yagna pavilions, banqueting halls, and the like, conform to the broad guidelines in the texts governing such ancillary structures.

Does form (aesthetics) take a back seat to function (aura, auspiciousness, and spiritual optimization) in Hindu temples, or are they complementary to each other?
The primary function of a Hindu temple is to be the house of the Divine on earth, to be the place where the Divine is present, and from which the Divine provides blessings to the surrounding country, to both Hindus and non-Hindus alike. The form of the temple, then, adheres to the prescriptions laid down in the ancient texts in order that the building is suitable, not only structurally, but also aesthetically and atmospherically, to contain the Divine. The temple must be attractive to the Divine, a suitably magnificent palace that reflects the Divine’s glory. This aspect is particularly important to American temples since they have to attract the Divine to a locality. Unlike in India where there are sites where the Divine has always been present (Shiva as Sundareshvara at Madurai, for example) or where the Divine has self-manifested at some time in the distant past (Venkateshvara in the Venkata Hills, for example), the landscape of the United States has not had similar legacies. When a temple is built in this country, the Divine has to be invited to occupy it.

Traditionally, the architecture and iconography of the temple help the devotee visualize, and so begin to understand, the ineffable. The architecture, progressing from outer halls to inner sanctuary, directs the devotee’s journey from the outside world towards the sacred. The iconography on the shrine and gateway towers maps the cosmological path. In most American traditional temples, the general experience is similar but the detail is different: here devotees encounter a pantheon of deities rather than those of a single tradition. Nearly all the thirty or so American Modern Dravida temples built to date are eclectic, meaning they have been built through the cooperative efforts of devotees of different Hindu traditions. These temples consequently have the additional function of providing a common worship space for different groups; their architecture, while using the vocabulary of the Dravida architectural language, reflects this eclecticism.

Can you tell us how your books on Hindu temple architecture have been rewarding to you? Have there been Indians in or outside the temple environment who have learnt more about their Hindu heritage because of your work?
Since 2006 I have written guidebooks to the temple of the India Cultural Center and Temple at Eads, Tennessee, the Venkateshvara temple of the Hindu Temple of Atlanta, the temple of the Hindu Society of Central Florida near Orlando, and a book on the shrine-wall sculptures in this same temple. I am currently finishing a guidebook to the Ramalingeshvara temple in Atlanta. This has been a highly satisfying journey of exploration and wonder. I knew nothing of Hinduism and Hindu temples before starting, but with access to excellent academic libraries I have been able to pick up a little, bit by bit. The characters are colorful, the stories fascinating, the truths deep, and the discipline hard.

I hope there are Indians who have learnt more about their heritage through the books, particularly the younger generation.