Home > Magazine > Features > The Next Generation of Indian American Musicians

The Next Generation of Indian American Musicians 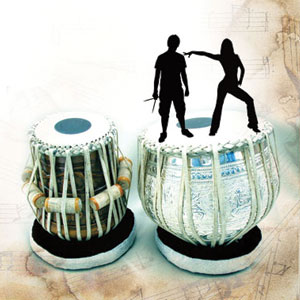 For decades, The Ali Akbar College of Music (AACM) was the focal point for the serious study of Indian classical music in the West. Many of the first students had originally studied in India, because that was their only option. Once the AACM was an established institution, the school became an internationally recognized pilgrimage goal, with people traveling there from all over the world. Classes included people from Germany, Argentina, Canada, Venezuela, Holland, Australia, as well as Bengalis, Tamils, and Punjabis who realized that nothing could replace studying the music of Ali Akbar Khansahib. I remember a blond two-year old who regularly came to class with her mother, and whose baby talk combined so many different languages that no one could understand her. This international community saw Khansahib as their only link with Indian culture and tradition and worried constantly about whether their music was Indian enough. There was an atmosphere very like an ashram, cut off from the rest of the world and spiritually devoted to a profound and enigmatic music.

More recently, however, thousands of Indians have come to America for non-musical reasons, and now there is more Indian community outside the AACM than inside it, especially in the Bay Area. Like all children of immigrants, this generation of Indian-Americans is given two contradictory imperatives: 1) Be true to your cultural roots and 2) Get a good safe job that makes lots of money. For the practical ones, the second imperative is given top priority, and the first is considered to be dealt with if one learns to make samosas and pakoras properly. But what about those who are driven by an inner creative force that compels them to go into music and the arts? How can you defy your parents with a clear conscience when they want you to become a doctor or an engineer? All artistic adolescents have this problem, but Indian-Americans have a strategy not available to Anglos: study Indian music and thus implicitly confront your parents with the fact that you are being truer to your cultural roots than they are. This is not just a game of “gotcha.” Connecting with your roots and fundamental values is an essential part of growing up. Anyone who begins their musical studies with Rock or Jazz will soon see that Indian music has much to teach them. And despite the stereotypes, in many cases the parents become supportive after a few months or years of parental cautionary noises, especially if they had once dreamed of becoming musicians themselves.

All of these factors have created a new kind of Indian music student that might be called the “Raga Nerd.” I have heard this term used by self-described Raga Nerds, and it is a label worn with pride. Nerds like Bill Gates rule the world in the twenty-first century, and anyone who cares enough about any topic to gather as much information about it as possible will use a similar label for themselves (Guitar Nerd, Comic Book Nerd, Cricket Nerd, etc.). So what’s the difference between a Raga Nerd and any other student of Indian Music? Anyone who tries to make this kind of distinction should not take themselves too seriously, and be content with a caricature that is a half truth or less. The Raga Nerd is an abstract archetype, like Yuppie, Hippie, or Feminist. There is probably no one who fully fits any such archetype, and most of us fit several of them throughout our lives. There are plenty of Raga Nerds who attend the AACM. Some even work there. Some got their first exposure to Indian music from Anglo AACM disciples hired by their parents to teach them sitar or tabla. Nevertheless, there is a palpable difference in personal style between these two generations of Indian music students, which perhaps can be summed up in a few overstated generalizations.

The traditional AACM student talks about the music in hushed tones, using poetic language about awareness of oneness, spiritual uplift etc. The Raga Nerds will listen respectfully to such talk, and even repeat what they call their teacher’s “Yoda Moments.” But when talking together, they are much more likely to get down to the nitty-gritty details of exactly what notes should be played in a particular raga, the best way to hold a sarod pick, and the differences between Vilayat Khan’s and Nikhil Bannerjee’s sitars. These conversations are likely to get loud and enthusiastic, with cries of “Dude! How could you even think that?” sounding at a distance like arguments over the Yankees vs. the Red Sox. The traditional AACM student wears Indian clothing to classes and concerts, and western clothes only at work. The Raga Nerd often adds an ironic touch to his Indian clothing, such as leather boots with metal studs or a punk hairdo. Female Raga Nerds often make brightly colored blouses out of their mother’s old saris, and wear them with blue jeans and platform shoes. They wear henna on their hands whenever they feel like it, not just for weddings. And most importantly, the Raga Nerd has no intention of waiting forever before they perform in public, or of dogmatically preserving the purity of a single gharana.

Raga Nerds will perform pretty much anywhere they can, breaking new ground with alternative music spaces such as the Red Poppy Art house in San Francisco or the Freight and Salvage in Berkeley. They may persuade a visual artist friend to let them play at a gallery opening, record a score for a fusion dance piece, or jam on tablas with a drum machine at a techno dance party. They create opportunities that preserve the traditional concert format, such as Gautam Tejas’ Sangati center or Srinivas Reddy’s Sadhana foundation. Many supplement their studies at AACM with trips to Calcutta, where they encounter teachers that give fresh perspectives on the gharanas that are studied locally. Thanks to students like Sameer Gupta and Javad Butah, Anindo Chatterjee’s influence can be heard in the local tabla mix, and Chatterjee himself now gives frequent concerts here.

The future of Indian classical music is in the hands of the Raga Nerds, and they seem to me to be good hands indeed. These young men and women are so deeply and fundamentally Indian that they feel no need to prove it to anyone. Thanks to them, Indian music will flourish the way it has flourished for hundreds of years: by creatively changing while still remaining true to its roots.