Thrilling Tale of a Chilling Disease 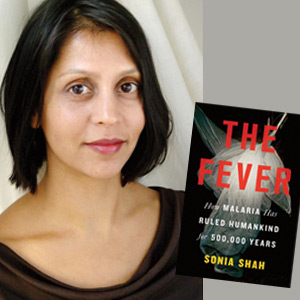 THE FEVER: How Malaria Has Ruled Humankind for 500,000 Years
by Sonia Shah. Farrar, Straus and Giroux. New York. Hardcover. 320 pages.

Potato peelers. A couple of bottles of expensive perfume. Ziploc bags for the extended family. And of course, the malaria pills. It’s a shopping list that is all too familiar to those of us who make the trip back to India every few years. The dreaded malaria pills are forced down rigorously on the one hand. On the other, our meager supplies of Off! repellent don’t seem to do much as the incessant buzz of the mosquito bothers our children trying to sleep under uncomfortable mosquito nets expressly rigged in anticipation of their arrival.

This is one of many accounts that are wonderfully described in Sonia Shah’s journalistic narrative about malaria, a disease that has been with mankind for 500,000 years. Shah, herself an American-born daughter of Indian immigrants, details her visits to her grandmother’s house in southern India—occasions when she could never understand why she had to sleep under suffocating and stifling mosquito nets while her cousins slept peacefully without the “hot, gauzy” encumbrances. The next morning, she remembers, “?my grandmother vigorously pats down talcum powder over my wounds, the white powder caking pink with congealed blood, as my cousins snicker. I don’t understand how they escape unscathed while I am tormented.”

Having to take the malaria pills while her cousins didn’t was just one part of Sonia Shah’s recognition of her “otherness”—her Indian-American identity. “Part of me despises my estrangement, my incomprehension, the fact that I must sleep under the suffocating net and take the malaria pills while my cousins don’t,” Shah writes. In an interview with Khabar, Sonia Shah remembers feeling guilty about her estrangement from India on the one hand, but also ashamed about an estrangement from American culture. “In both places, it seemed, I wore the clothes wrong, said the words wrong and ate the food wrong.” She says it took time for her to understand herself as a “cultural mongrel” and make peace with it.

And while her personal connections as an Indian American gave her some material for her latest book: The Fever: How Malaria Has Ruled Humankind for 500,000 Years, Shah points out that it was her earlier work that was the real impetus. The Body Hunters was about drug-industry experiments in developing countries, most of which were for drugs targeted at Western markets. “One of the prime examples of this, I learned, concerns malaria, which drug companies develop very few drugs for, despite the fact that it affects hundreds of millions every year,” Shah says adding that one of the cutting-edge medicines to treat malaria is based on a 1,000-year-old Chinese remedy. When writing an earlier book, Crude, about the oil industry, Shah found out that oil companies have been struggling with the disease as they have started developing oil and natural gas resources in Africa.

So a look at malaria seemed like the next logical step for Shah. Her exhaustive account tackles many fascinating aspects of the disease—its origins, our early history with it and even the biology of transmission through the Anopheles mosquito.

It is especially fascinating to see how entire events in history were influenced by the disease. “Not everyone living under P. falciparum’s spell considers their situation an unmitigated misfortune. It isn’t easy to live with malaria, but those who survive the gauntlet of a falciparum-infested childhood gain a powerful immunological advantage over others. P. falciparum, deadly for outsiders, can no longer kill them,” Shah writes. It is this advantage that had the Bantu villagers in Africa fight off wandering nomads and also led to a much larger-scaled reshaping of the world settlement maps. “After the loss of its American colonies, British Parliament debated the notion of sending convicts to Gambia, but noting that such an exile amounted to a death sentence, they decided against it. They sent them to the terra incognita of New South Wales, Australia, instead,” Shah writes, pointing out how one persistent disease, among other things, shaped the population of entire continents.

It was also malaria, Shah argues, that led to important events in history like slavery to turn out the way that they did. Shah’s chronicle of exactly how this transpired makes for fascinating reading about a part of American history most of us might not have read about.

Industrialization—such as the building of dams to generate hydroelectric power—also had an indirect effect of increasing the incidences of malaria in the United States. The “still, sunny ponds” created were perfect breeding grounds for the malaria vectors.

The Fever also looks at the rise and fall of the chemical, DDT, as an agent against malaria. For a while the use of DDT was considered an integral part of the fight against malaria and millions were spent on having it sprayed in countries around the world—including India. Many of us might remember the little pistons we used to pump in the early evenings to spray our homes with DDT, trying to ensure a good night’s sleep. Silent Spring, environmentalist Rachel Carson’s groundbreaking work, led to the eventual fall in the use of DDT, although it is being plugged for a comeback lately. In the United States, the eradication of malaria was preceded by rural electrification, mechanization in agriculture and wetlands reclamation. In fact tracing the history and eradication of malaria in the United States makes for one of the many fascinating aspects of Shah’s book.

Shah does an excellent job tracing the history and chronology of the disease throughout the book. Her arguments particularly shine when she talks about Western approaches to the disease that try to eradicate malaria through the use of methods not readily adapted by the locals in places where the disease lingers. Despite the fact that malaria kills so many around the world, the countries that need the most attention don’t regard the disease as very foreboding. In fact, when Shah mentioned to her Indian relatives that she was working on a book about malaria, they “reacted to my writing this book with mild puzzlement, as if I’d announced I was working on a book about bunions,” Shah writes.

In places like India, where new and therefore more scary-seeming diseases crop up every year—dengue fever and the new “Australian fever” have been dominating newspaper headlines in India lately—malaria seems to be more of an annoyance treated with as much respect as the common cold in the West. In a recent survey conducted by Swiss Tropical Institute epidemiologist June Msechu, nearly 60 percent of Tanzanians said they considered malaria a “normal” problem of life. Many in affected countries cannot understand why malaria should be selected for elimination rather than poor living conditions or any other disease, Shah points out. “It’s a testament to malaria’s great success as a pathogen—many people carry the parasite and pass it on to others without feeling very ill. Also, in many places, there is so much malaria around that death and serious complications are in fact very, very rare. It’s a familiar risk, one that people in malaria countries face all their lives—and risk-perception studies have shown that people fear unusual risks more than familiar ones,” Shah says.

This problem also affects the methods by which the cure is addressed. For instance, mosquito nets were an important part of the recent Roll Back Malaria campaign. But, as Shah argues in Fever, while they do prevent the incidences of malaria by 20 percent, the nets are viewed as a nuisance by many Africans. The tightly meshed nets hinder ventilation for one thing—a serious problem in the humid countries where malaria still prevails. So while the West is allowed to feel benevolent about distributing treated nets and spending billions on them, the solution doesn’t address the underlying practical and sociological problems behind the disease. Even worse, as Shah argues, monolithic organizations such as the Gates Foundation have taken over the goal of eradication. And monolithic organizations often have monolithic approaches to the solution.

Especially in the case of malaria, a “one size fits all” approach doesn’t work, as Shah so eloquently points out. She recommends instead that local communities spearhead the efforts with a multi-pronged approach that removes stagnant water pools, educates the public and customizes solutions. The goal for slow eradication then should be measured in terms of decades, not years, Shah argues. The solution might not be grand, but simpler ones tailored for specific communities have the potential to work.

The research for Shah’s book took her to some of the most malaria-infested regions of the world—including Malawi and Panama. Despite these forays into malaria territory, Shah has thankfully never had the disease. She did have a nasty scare though because her husband nearly died of Plasmodium falciparum.

As for the malaria pills, Shah says her children actually look forward to their daily dose when they travel abroad. The secret? Half-melted chocolate caramels. “Just sink the pill in the middle,” Shah advises.

[Poornima Apte is an award-winning journalist who reviews contemporary fiction and nonfiction in her spare time.]