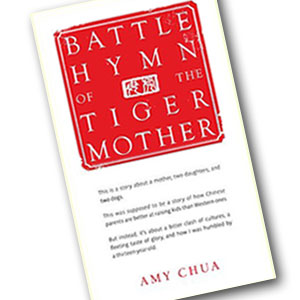 Imagine being called “lazy, cowardly, self-indulgent, and pathetic” by your boss. How does it feel?

Now imagine a parent labeling their child with these descriptions. Is this an acceptable parenting style, if it is interjected with abundant love and the “best intentions” for the child’s welfare?

Such abusive name-calling is one of the many unconventional approaches outlined in the much talked about book, Battle Hymn of the Tiger Mother by Amy Chua. When I read Chua's essay titled, “Why Chinese Mothers are Superior,” (excerpted from her book) in the Wall Street Journal, my brain reacted exactly as nature (and perhaps even Chua) intended it to. My mind grew agitated. My heart rate surged so high that I longed for it to qualify as aerobic exercise. The essay challenged my advocacy for emotional intelligence skills in children. A moment later my brain’s rationality kicked in, prompting me to wonder, “Should life be led in extremes or in balance?”

Balance, I believe, is a characteristic of superior thinking and, yes, superior parenting.

Chua obstinately purports that her parenting style is the ideal one. Her deliberate strictness, public humiliation (calling her child “garbage” in front of family friends), and imposing her decisions about her daughters’ future lives, she asserts, contribute to mold the “stereotypically successful” Chinese child.

Following were some things her daughters, or shall I say “works of art,” were never allowed to do: attend a sleepover, have a play date, watch TV or play computer games, choose their own extracurricular activities, get any grade less than an A, play any instrument other than the piano or violin.

Are there some of you who suddenly feel validated in pursuing a similar path to glory? Wait! There is always another side to the story.

Accompanying Chua’s essay in the online edition of the Journal is a six-minute video featuring women who were raised in an environment similar to the one Chua describes. Both women in the video, now mothers, confess that while they are grateful for their parent’s sacrifices and strong emphasis on academics, they would not raise their own children similarly. Why? Because they wanted “more quality time,” “support without intense parental pressure,” and the option to “make their own choices.” One of these moms divulged that she longed to be a nurse but her parents insisted that she pursue a business degree instead. Two years into her independent adult life, she returned to school to pursue her passion and became a nurse. It was then that she felt fulfilled and “happier.”

Even though Chua discounts the value placed on emotional and social intelligence skills by poking fun at the value of self-esteem, I do agree with some of her other viewpoints.

She states that part of a parent’s job is to make sure that kids are succeeding academically. I agree. Knowledge is power and academic goals should be held high by parents and students alike. However, unlike Chua, many parents do not feel the need to threaten their child to get A’s. The children will be fed if they come home with a lesser grade.

I have seen self-determined children of parents who taught them the concept of setting goals. These kids almost always achieve what they set out to do. No threats or punishments are needed. These parents find it pleasant to stand back, offering guidance and support when it’s needed, and applaud when the children revel in their self-motivated success. No, they didn’t get lucky. They worked hard on their chosen parenting style. Their children succeed because they have been taught to “want” good grades for their current and future benefit. When children “have to” get good grades to please their parents, the effort, not to mention the celebration, is less than whole.

Chua points out that as parents we must teach our kids the concepts of discipline and persistence, though she threatens to prohibit meals and donate away toys if her kids don’t catch on. While I don’t agree with that extreme, I do think sometimes we let our kids give up too easily. It’s when they aren’t allowed to give up that they realize what they’re capable of. These are the roots of confidence and self-esteem. The trick, I believe, is to be persistent in setting expectations and to enthusiastically encourage instead of threaten and punish. The Dalai Lama says love and compassion are necessities, not luxuries.

I don’t mind Chua’s idea of setting limits, but frankly, there are limits to limit-setting. Her daughters are not permitted to be in a school play. What if Shabana Azmi’s or Anjelina Jolie’s parents had done that? Need I say more?

Chua wants what’s best for her children. So do many other parents, but their style respects their kids’ opinions, emotional needs, and natural strengths no matter how divergent they may be from those of the parents.

And what of the tiger mom’s signature trait of lamenting that lost mark when the child brings home a 99 out of a 100 on a test? I’m reminded of Andre Agassi. The tennis superstar writes in his book, Open, of his father chastising him right after he won the Wimbledon. In a very Chua-like fashion his father said, “You had no business losing the fourth set.”

Could this parenting style have made Agassi hate tennis, resent his upbringing, which he refers to as “prison- like,” and self-soothe his angst with the dangerous drug Crystal Meth? Like the women in the video who were raised under Chua’s style of parenting, Agassi states that he will expose his kids to tennis but allow them to steer their own future. Chua assumes she knows what’s best for her children and would shudder at the thought of them steering their own future.

Chua views her children as mounds of clay. If I had to use the same analogy, I’d consider a way of sculpting different from Chua’s. Chua uses a sharp chisel, relying on the force of a hammer to painfully break her hardened piece until it is “perfect.” I’d opt to pour water on my clay to soften it, and then gently mold it with my bare hands pressing firmly in tough spots, and softly in the more delicate parts. Moreover, my “work of art” would not be a product of my ego. I don’t need to show it off to the world in a museum, or at a piano recital in Carnegie Hall.

Chua wouldn’t be happy if her daughter announced that she wanted to be a pastry chef. I, on the other hand, would ask my son if this is truly what would make him happy as he rolled out of bed every morning. If that was the case, I’d support him fully and encourage him to be the best darn pastry chef in the world. I’d say “Think big, like Emeril or Rachael Ray.” Think like CNN’s Top 10 Hero Narayanan Krishnan, who is using his five-star chef’s talent to feed India’s poor. Yes, there’s magic in thinking big. There’s also magic in seeing a child fulfill his or her heart’s desire.

Chua’s parenting style walks the razor’s edge. Persistence is a key strategy but one needs to know when to say when. A superior parenting style includes balance. Balance is what a tightrope artist needs. It’s what a chef needs to create that perfect soufflé. It is what we hope our surgeon’s hand has, as it works on a tumor next to large blood-bearing artery. Does it not make sense, then, that we should have balance in parenting?

Take Chua’s ideas, but with a grain of salt. Let your heart play a part, not your ego thinly veiled as an altruistic and dutiful parent. Your kids are counting on it.