Travel: A Plunge Into Adventure—of Body and Spirit 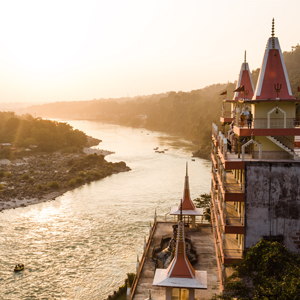 In its modern avatar, the ancient city of Rishikesh is fast becoming a darling destination for adventure sports such as white water rafting, kayaking, cliff jumping, rappelling, and more. Its ancient legacy as a magnet for spiritual seekers, however, continues to endure. After all, what can be more thrilling than plunging into the depths of one’s own being—the shoonya (nothingness) from which everything arises? 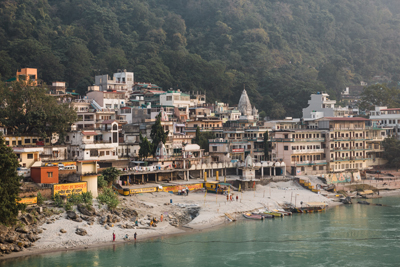 Sitting on the banks of the mighty Ganga, the sacred city of Rishikesh has welcomed devotees from near and far for thousands of years. They travel to this place of high vibrations to get a step closer to God—by bathing in the holy Ganga, performing religious prayers, or by simply meditating along the riverbanks to seek salvation.

All through the ages, yoga and spirituality have always been the signature associations of Rishikesh. But the city that had remained important in the Hindu pantheon, suddenly stepped into the global consciousness in February of 1968, when the Beatles visited the Maharishi Mahesh Yogi’s ashram in Rishikesh, attracted by his Transcendental Meditation techniques. While they were here, they composed numerous songs. Made popular by their visit and their experience, Rishikesh has since continued to attract many other followers from the west. Since 1989, the city even hosts a month long annual International Yoga Festival in the first week of March.

(Bottom)Several rapids across different grades and stretches make it convenient for rafters of all skill levels to get into the water. Rapids from Grade 1 to Grade 5, Rishikesh seems to have it all.
(Photo: Karthika Gupta)​​ 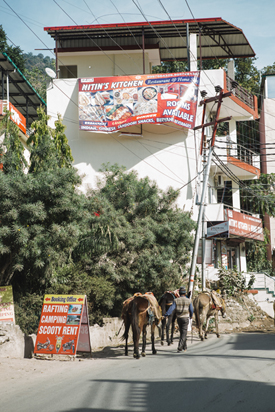 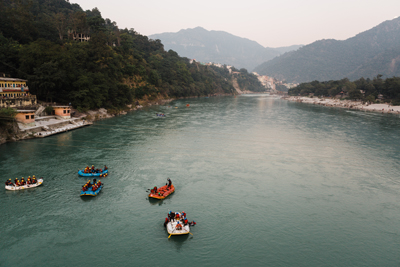 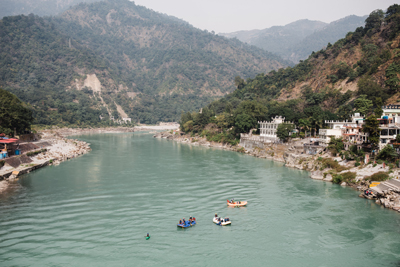 Today, yoga schools and studios are bursting from every corner of the city as throngs of seekers and yogis from around the world come to pay respects to their gurus and lineages, and to do sadhana in their search for mukti, nirvana, liberation, enlightenment—whatever one may call it.

Steeped in culture and tradition, this ancient pilgrimage site has been written about in all the Indian epics. The Rishikesh of today seems to be an inextricable mix of the old and the new. Look closely and you will still find the ancient energy and powerful vibrations that make up this sacred city. You can hear it in the ringing of the temple bells, the fast-flowing waters of the Ganga, the mooing of the cows in the streets, and in the chanting of pilgrims at the riverbanks. You simply can feel it in the air. All you have to do is open your mind and soul to the magic and mystic of this storied place.

These days there is more to Rishikesh than just its rich legacy. There is a new kind of visitor profile added to the hordes of seekers traveling to Rishikesh—the adventure junkie. Adventure sports is the latest trend to have come to this popular destination. From white water rafting, kayaking, cliff jumping to rappelling, there seems to be something for every kind of adventure enthusiast. 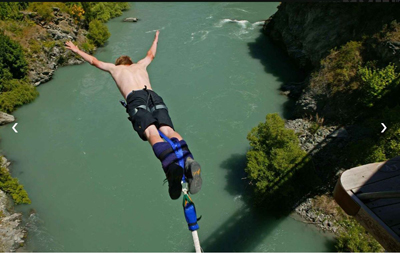 Thrill seekers from all over the world come to traverse the rapids on the Ganga. Several rapids across different grades and stretches makes it convenient for rafters of all skill levels to get into the water. From Grade 1 to Grade 5, Rishikesh seems to have it all. Sylvia Fountaine of Spokane, Washington who visited the city in 2019, with her husband Brian, described rafting down the Ganga as “a thrill of a lifetime.” She says, “Letting the water carry us through fast rapids felt like the ultimate surrender of self and soul to the power and mystic of this holy river. At one point, the raft toppled over and we all went under—only to emerge feeling reborn, a baptism of sorts. It was definitely one of the highlights of our India trip.”

For people who don’t want to get into the water, there is an exciting array of other adventure sports as well. The Shivalik hills around Rishikesh offer plenty of opportunities in the form of mountain biking, bungee jumping, and ziplining. The village of Mohan Chatti around Rishikesh is a popular spot for bungee jumping against the backdrop of the calm waters of the Ganga.

Vedant Rao, the founder of The Urban Camper, an adventure outfitter aspiring to reintroduce urbanites to the great outdoors, believes that accessibility is a huge factor in the popularity of adventure sports in the area. According to Rao, not only are there numerous rivers and tributaries ideal for water sports but also endless hills and trails suitable for all kinds of land activities, thereby attracting adventures seekers of all levels from all walks of life. This fuels a booming adventure sports tourism industry in and around Rishikesh. 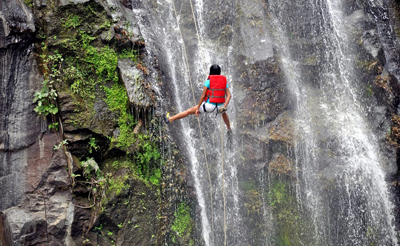 In a study conducted by the Government of India’s Ministry of Tourism in 2015, the state of Uttarakhand, at around 400, had one of the highest numbers of registered adventure sports outfitters in the country as well as having the highest annual number of adventure tourist visits—both domestic and foreign—at over 10 million. The study also found that Uttarakhand has one of the highest statewide market share of adventure tourism in terms of revenue earned at around INR 485 crores which is approximately $64 million.

Of course, like anything else done in excess, there are now some serious environmental impacts to rafting on the Ganga. Trash being thrown into the river and erosion caused by beach camps on the riverbanks are just some of the problems surfacing. Over the recent years, the Uttarakhand government has stepped in to control the number as well as the quality of outfitters that are allowed to operate in the area.

For all the avatars that the city seems to take, Rishikesh continues to retain its original pull as a city of mysticism and spiritual awakening. As it turns out, it is also a big gateway to the Indian Himalayan region—the land of the yogis. It is also the starting point for many religious pilgrimages such as the Chardham Yatra as well. 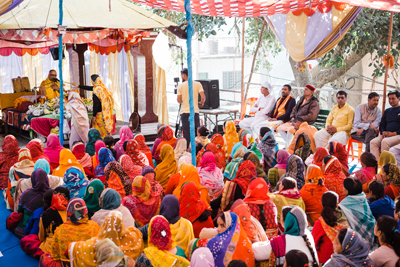 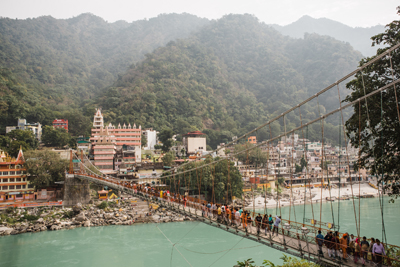 To many, Rishikesh is still the center of a powerful energy source that cannot be described in words—it needs to be felt in the soul. Activities like catching aarti on the river Ganga, walking across the Laxman Jhula–the long suspension bridge, and even just watching people along the ghats may seem ordinary, yet have the effect of grounding—a reminder of the daily hum of life against its larger goal of seeking realization.

(Left)From western seekers and adventure sports junkies to Indian pilgrims, the city is an important center. It is a gateway to the Indian Himalayan region—the land of the yogis; and also the starting point for many religious pilgrimages such as the Chardham Yatra. (Photo: Karthika Gupta)​. 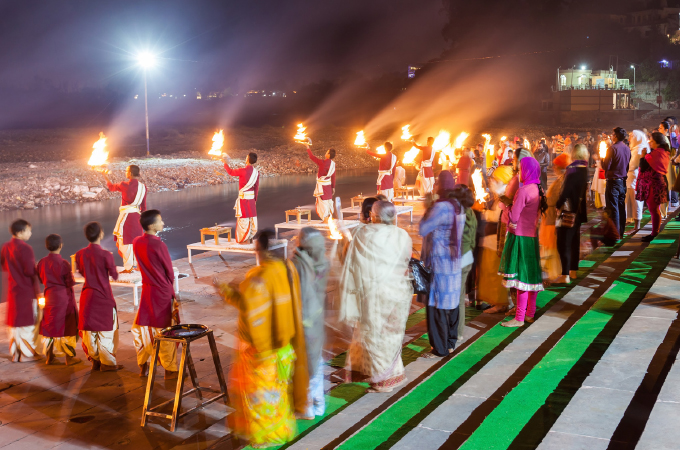 The city has been, and remains, a place pregnant with possibilities for the spiritual seeker. Find a place by the river and mediate. Hear the prayers bells. Let their mighty vibrations reverberate deep into your soul, and take a deep plunge into the mighty cosmic adventure.

Karthika Gupta, originally from Mumbai, is a travel writer and photographer based in Chicago, Illinois. Her work focuses on travel, culture, and lifestyle narratives from around the world. She can be reached at karthika@karthikagupta.com