Travel: Another China, Hidden and Multiethnic 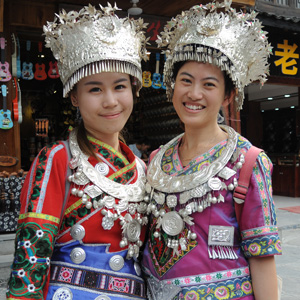 The landlocked Ghizhou province in Southwest China can surprise any visitor: although it is now one of the fastest growing provinces in China, it is also a luxurious land of ethnic groups and scenic landscape, with a topography of plateaus, mountains, hills, and basins. If you are flying out of cosmopolitan Shanghai or Beijing, Ghizhou’s natural wealth of forests will be one refreshing change; another will be experiencing the heartland of Chinese native culture.

The plateau is a Karst landscape that has undergone changes through continuous stream erosion and folding, resulting in incised valleys, steep gorges, and cliffs. The famed Huangguoshu Waterfall is on one such cliff.

Hundreds of rural villages are interspersed among terraced rice fields, and the traditional architecture of the land is evident in the ancient temples and the bylanes full of traditional shops. In recent years, the architecture of many buildings typical of Miao, Dong, and Han ethnic groups, who live together, have been tastefully restored to their former glory.


In contrast with the modern high rise buildings that dominate the skyline of its prominent city and capital, Guiyang, the historic town of Zhenyuan with its nearly 2,000 years of architecture speaks of the ingenuity of the people in building lasting frontiers, including the southernmost section of the Great Wall itself. Melding the cultures of Buddhism, Taoism, and Confucianism, Zhenyuan is a famous historical and cultural city of China.


In addition to the major festivals and celebrations throughout the year, folk dramas and music are intrinsic parts of Guizhou’s culture, as in much of the rest of China. The Miao community often sing of their revolutionary history and heroes.

A devotion to arts and crafts is reflected in daily life. The Dong ethnic minority build their wooden houses, bridges, and drum towers without any nails. The Dong, Bouyei, and Gelao are particularly known for their batik, the Miao for their heavy silver ornaments, and the Miao and Bouyei for their intricate, colored cross-stitch work. Some Miao women, as well as being famed for embroidery, still weave their cloth and dye it with homemade indigo paste.

Bhaskar Krishnamurthy is an award-winning, widely published photojournalist and the founder of www.clicabroad.org, which helps children in the hinterlands document and share their old world culture by learning photography.