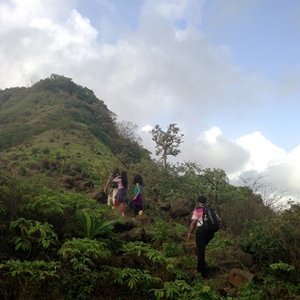 Sand castles and beach parties. Drug busts and mining scandals. And tourism gone a tad sour. Sadly, that’s what Goa is mostly about these days. Or is it? Going off the path of 5-star comfort yields another Goa, still unspoiled, where man and nature co-exist with respect and harmony.

“Lycheee!” the little girl behind me shouted yet again. I could not take it anymore. I turned around, stopped her in mid-breath and said, “You know, when you are in a forest, you should not shout.”

“Because you will scare away all the birds and animals.”

My censure worked…only for the next few steps, and before long she was back to screaming “lychee” each time a leech crossed her path. I gave up and walked away. Not only was the shouting a disturbance in our guided walk through pristine nature, but thanks to her mispronunciation, now each time I think of my favorite fruit, my mind conjures up a blood sucking parasite.

I could put down the little girl’s dread to her first walk on a forest trail, but her 18-year-old cousin was not faring much better. Spotting a leech trying to make its way up his shoe, he did a mad dance in front of Vithal, our guide. Hopping from one foot to the other, he yelled “Help, help!” His family joined in the chorus, “Help him, oh, please help him!” as if he was in danger of being devoured by a dragon. To his credit, Vithal kept his cool, showed them once again how to flick off a leech with the help of a twig and we carried on.

We reached the waterfall and I found myself a perch to take in the sight. Above me, a darkening sky held the promise of monsoon drama. Water rushing past black rocks, lush vegetation, and clouds—what a contrast this was to the parched environs of Delhi that we had just come from!

Lush green mountains—not the first popular image associated with Goa. But for some, the beauty of the Sahyadri (the benevolent mountains) range may well be the larger draw of the region.

We were on the Waterfall Trail at Wildernest, Goa, at a location which is a far cry from the Goa of beaches and parties. Sitting on the Sahyadri mountain range of the Western Ghats, this is an Ecotel (ecologically inspired hotel) tucked into the forests, in a tiny triangle where you can be in three different states in a matter of minutes—Goa, Maharashtra, Karnataka.

Eighteen cottages made up the accommodation, named after local flora and fauna. The amenities were simple but I was charmed by all the well thought out touches—luggage tags of paper and twine, copper jugs and tumblers in the rooms, metal bucket and a lota (tumbler) in the bath, along with ubtan and shikakai powder. The hotel makes a conscious effort not to provide any plastics.

A conversation with one of the managers led to the topic of waste disposal. We learned that the resort has a trash segregation program onsite, composting organic matter and sending recyclables to Belgaum. He also mentioned a waste water filtration unit. Once a week, they send their staff to collect litter from the forest trails on their property. Even if a resort has waste management built into its blueprint, some visitors evidently show scant respect for it.

My sister had picked out Wildernest as our holiday spot and I barely read anything about it prior to our travel. In hindsight this turned out to be a good move—living in a hyperconnected age, where every detail of a destination is laid bare and one is privy to each whine of a disgruntled traveler, it was refreshing to arrive at a place and say “Surprise me!”

Walks were aplenty every day—from cottage to restaurant, along forest trails, a stroll through Chorla village. Pacing my steps with the others on the path, it was easy to fall into conversation with them. A young man inspected marks on a tree trunk with a naturalist. “Those marks were not made by a bear, looks like a leopard,” he said. And how did he know? He was a wildlife biologist on vacation at Wildernest. Details emerged about the resort. It was the idea of a few dedicated conservationists who had purchased land to keep a swathe of forest intact. Much later, after my return, I learned how vulnerable this area is to threats of mining, power projects, and poachers.

Right then, oblivious to such concerns, I was enthralled by nature’s sights and sounds—the call of the Whistling Malabar Thrush, a skink sunning itself on a wooden ledge, almost merging with the color of its resting place, a nest of industrious weaver ants up in the tree, engaged in binding leaves together with shiny white silk, a mud labyrinth made by harvester ants, so symmetrical that it seemed they must have drawn up plans before building it. All this would have escaped us had it not been for the naturalists who pointed out details that our city dwellers’ eyes could not discern. We were close to the habitat of large animals but they were difficult to spot as many of them are active only at night. But the keen eyes of the young men and women at Wildernest brought the lesser fauna into center stage.

The eco touches are evident everywhere, including the earthen vessels featuring regional cuisine that is the daily fare.

The resort’s operations were a revelation in themselves, a great example of sensitive and responsible tourism. The restaurant served regional cuisine and all meals were local fare, no apologies. This choice made perfect sense in a remote place where most of the staff came from nearby villages. No TVs in the rooms but every other evening there were screenings of films about regional wildlife. And when you are in the forest what can be better than nature walks? Every morning, the restaurant white board would feature an announcement of a new walk for the day.

As an Ecotel (ecologically inspired hotel) the Wildernest Resort may look spartan, but it is at the top of its game, thanks to design touches by Nirmal Kulkarni, a noted Goan ecologist who is one of the directors.

“It looked like a small dinosaur! It changed colors right in front of our eyes!” The children were in a rush to tell me about what I had missed while I was on the trail. They had been curious about the contents of a cloth sack that a naturalist was carrying. It turned out to be a forest chameleon, of a kind the staff had not seen before on the premises. They were taking it to Mhadei Wildlife Research Center to share their “discovery” with noted Goan ecologist and one of Wildernest’s directors, Nirmal Kulkarni who, I came to know, has done extensive work to document the lesser known fauna of the Sahyadris. His efforts are also directed at educating lay people about the importance of forests and involving local communities in preserving the ecology. No wonder, I thought to myself, the green efforts of this ecotel ring true, if there are such people at the helm—unlike other places A variety of guided treks offer visitors a choice of lush forests, waterfalls, wildlife, and challenging hills. Travel where ecotourism is just a label, added on because it seems to be the most trending.

“Here, hold my hand,” Ashwini offered to help my daughter over slippery roots as we climbed a hill. Like most of the young women working at Wildernest, Ashwini came from nearby Chorla Village and was our guide for a couple of treks. Come evening, I could hardly recognize her. Out of camouflage jacket and pants that she wore on the trail, she was now in a bright red sari. She sang an invocation to Ganesh, leading the staff girls in a local dance, fugdi. They explained that these were the dances performed in the village during Ganesh Chaturthi. I watched them, marveling at their natural grace, untutored by the need to impress tourists. I couldn’t help but wonder, too, at the ease with which they were able to shift between two different personas—from savvy trekking guides to traditional village dancers, it was all in a day’s work for these young women!

The Western Ghats, of which the Sahyadri mountain range of this region is a part, are considered one of the “hottest hotspots” of biological diversity in the world. Seen here is a green vine snake.

Dinner over, it was time for the night walk. We were excited, but being city birds, there were twinges of apprehension as we followed our guide away from the cottages. In the dark, the forest takes on a different personality altogether, where it’s hard to believe one’s own eyes. As the guide trained his flashlight upward, what seemed like a bright shoot of a branch turned out to be a green vine snake. At a pond we saw a large bullfrog, each eye a different color.

“Switch off your torches, close your eyes for a while, then open.”

We did as instructed and as our eyes got used to the darkness we could make out faintly gleaming patches in the vegetation. They were all around us and the guide reached for the closest one. It was a stick and he asked my daughter if she’d like to hold it up. She did and it seemed as if there were strange white patches floating in the air. Both my sister and I drew in a sharp breath. “Ectoplasm, this is the ectoplasm we read about in ghost stories!” my mind shrieked. Of course, there was a perfectly sane explanation for the phenomenon. “The bioluminescent fungi are brighter and green in color if the rains are good,” we were told, but by now we were in a hurry to get back; this sight was spectral enough for us!

It was time to leave. As we drove back past small Goan towns, thoughts about our visit flooded my mind. Over my years in the tourism industry, I’d observed hotels large and small. Many had attempted to give their visitors a unique experience by showcasing local culture; an equal number would incorporate completely alien influences, incongruous and jarring in their setting! In this, Wildernest offered a refreshing, out-ofthe- box approach to the business of tourism. I was left with happy memories of its environmentally sound design, cultural rootedness, and genuine desire to make a lasting impact on visitors. Adventure, fun, knowledge and respect for nature, our visit into the Goan wilderness had given us so much—could one ask for more?