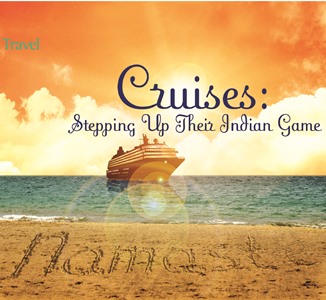 South Asians are a large and growing market for cruise vacations. What do they look for on such trips? And how are cruise companies catering to this booming category of travelers?

This past summer, my husband and I took a twoweek Mediterranean cruise aboard Royal Caribbean’s newest ship, Anthem of the Seas. As we were walking through the tastefully decorated lobby of our 18-storied ship, one of the crew members excitedly approached us, guessing our Indian origin. Sanjeev, as his name tag said, whispered to me, “Do you know who else is on this ship? The Kapoor family!” I looked puzzled. There are a lot of people with the last name Kapoor, so I wasn’t sure who he was referring to, and why it should concern me. “Do you watch Bollywood movies?” He tried to refresh my memory and recited, “Rishi Kapoor, Randhir Kapoor, their spouses, sisters and mom, everyone is here on Anthem of the Seas!”

Incidentally, though there were 6,000 other passengers onboard, I did run into celebrity actor Mr. Rishi Kapoor himself several times during our cruise. We exchanged pleasantries and he mentioned how it was his family tradition to take a cruise holiday together every summer—a live version of Zoya Akhtar’s Dil Dhadakne Do, I thought.

Cruising is on the rise in the South Asian community
Cruise holidays were once considered out of reach for all but the most affluent. Now an increasing number are putting a high-seas expedition on the holiday agenda. According to TIRUN Travel Marketing, a market leader in introducing cruise tours in India, over 125,000 Indians cruised last year, boosting the company’s revenue by 45% from the previous year. The result is that at least 10 of the world’s top cruise companies have opened offices in India and several travel agents are offering cruise vacation packages.

What it means for Indians all over is an industry keen on catering to Indian tastes and needs. 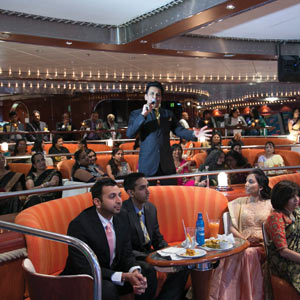 Houston based Masala Cruises has been offering desi themed cruises for over a decade.

All-inclusive vacations for the entire family
South Asians favor a joint family structure, so cruising is an attractive way for the entire family to spend quality time together. Toddlers play with life size cartoon characters; teenagers skate, swim, watch movies, and hang out with their peers; adults indulge in extreme sports such as skydiving and rock-climbing in a safe environment; while grandparents play mini-golf, bingo, and trivia. Every age group can be entertained with the hundreds of activities offered on board, and come together for meals and shows. Many families are preferring to take a cruise vacation rather than land, as it saves time and money and is more enjoyable.

Multiple families and communities also group together to take cruise holidays together. Houston-based Masala Cruise has organized 42 sailings for large South Asian groups that offer Bollywood themed entertainment and upgraded Indian menus exclusively to their guests. Sandya Thakkar, Vacation Specialist at CruiseOne, who organizes South Asian themed “Masala Cruises,” says people come from all over the nation to their cruises that are offered from Port of Galveston, Houston.

Royal Caribbean, one of the world’s leading cruise lines, is planning to widen its customer base in India by tapping into the family segment, with cheaper and short-haul itineraries. Lodging can be tailored to accommodate a family of four to twenty. Groups can request connected rooms, additional beds, or cribs for infants, as well as luxurious two-bedroom suites and lofts.

Some of the other popular family-oriented cruise lines include MSC Cruises which is offering rates as low as $300 per person for a week, as well as no charge for kids under the age of 11. Regent Seven Seas Cruises do not charge for shore excursions, which can amount to a few hundred dollars depending on the number of ports of call.

South Asians looks for value, as well as luxury
Of course, young couples or honeymooners also comprise a large share of the cruising market in this demographic. US-based couples like Mousumi Chinara and Atul Singh enjoy cruising because it offers a relaxing vacation, without having to plan every detail. Like most South Asian vacationers, they are discerning and want the best value for their buck. They generally look for quality when considering their vacation, and want to visit many destinations in a short amount of time. A cruise is an all-inclusive holiday, and the couple carefully considers dining options, recreational activities, and shore excursions before choosing a certain cruise line. The more stellar facilities the cruise has, the more likely they are to embark on it.

Singh even took his parents visiting Chicago from Kolkata, on a cruise to the Eastern Caribbean. They enjoyed warm weather, beautiful island scenery, international flavors, and onboard entertainment, with the convenience of floating on Norwegian Cruise line.

Cruising has always been popular with the older population in the Western world. Now senior South Asians are taking to the seas as ships cater to their needs. 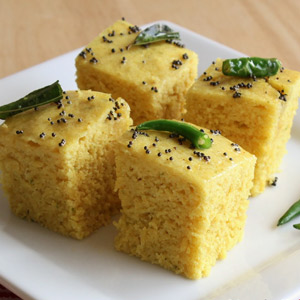 Did we mention Indian food?! Many major cruise companies now feature flagship Indian restaurants boasting a wide variety of food including regional specialties like Konkani and Gujarati dishes, to name just a couple.

Food is an important consideration for South Asian cruisers
Besides luxury, comfort, entertainment, and ports of call, South Asian cruisers consider dining options that satisfy the palates of the entire family. One of the questions potential South Asian travelers ask is, “Will there be enough vegetarian options for food, beyond salad and French fries?” While flavors of freshly grilled tandoor chicken, flaky buttery naan, or delicately spiced dal were previously hard to find delicacies, Indian food is now becoming mainstream, catering to a global audience. I remember, back in 2005, while I was sailing Royal Caribbean’s Grandeur of the Seas to Cozumel, there were no spicy options on the menu. The only way you could get nostalgic flavors from home was by befriending the friendly South Asian staff who cooked more traditional meals for themselves. One day, I watched a big group of Gujaratis devouring poori-chana at lunch—and that was when I found out about this insider hook up!

Today, many cruise lines recruit a large number of chefs and seamen from Mumbai and Goa every year. As many as 10-12 per cent of the total crew employed by Royal Caribbean comes from India. “We do disproportionately well in India when it comes to hiring. We have started looking at hotel schools, Sheraton’s hotel training program to get people on board, especially in the food and beverage department,” says Gavin Smith, Regional Vice-President for Royal Caribbean Asia-Pacific. 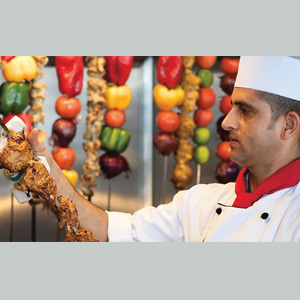 Major cruise companies have been catering to Indian tastes for many years now. That trend has shot up so much that Indian cuisine has become a staple in most mainstream cruises. Seen here is a banner promoting the tandoor offerings on a Carnival cruise ship.

Superstar’s ship, Virgo offers pork and lard-free dining at their Taj Indian Buffet Restaurant, as well as outlets for Chinese, Italians, and Mediterranean dining, making it one of the most popular cruises in the community. Even Carnival (the biggest cruise line in the world) has a flagship Tandoor restaurant on four of its ships (Splendor, Dream, Magic, Breeze) sailing to the Western and Eastern Caribbean. Carnival Cruise Line quotes on their website that they can provide their guests, “Vegetarian, Low-Cholesterol, Low-Fat, Low-Carbohydrates, Low-Sugar, Gluten Free, Indian Vegetarian, and Kosher. For Indian Vegetarian and Kosher meals, two weeks advance notice prior to your cruise is required.”

Certain destinations tend to be more popular
Divya Pahwa, a New Delhi-based travel agent at Travel Explorer’s, gets the most inquiries on cruises going to Singapore, Hong Kong, the Mediterranean, and Alaska. Singapore is perhaps the most popular departure point as it is easily accessible and offers short term cruises around South Asia, giving travelers an opportunity to explore the rich culture of this region. Masala Cruises currently focuses on Caribbean and Alaska itineraries, especially during the summer, and coinciding with school holidays. Europe and Mediterranean cruises are also all time favorites, though can be more expensive.

According to Shahil Shah, a passionate travel enthusiast who loves to write about various travel stories and tips from around the world on his blog, Holiday Birds, the top five destinations for desi cruisers are: 1. Alaska for adventure seekers and families with kids; 2. Bahamas for low cost honeymooners; 3. The Caribbean for duty free shoppers; 4. Europe when money is not an issue; and 5. Singapore for those who enjoy hopping around smaller islands.

Many agents are offering package deals that include a cruise holiday for those traveling to the US. For example, Star Cruise and SOTC Holidays sell a 12-day package to the US where you will visit New York, Washington D.C., Niagara Falls, and Orlando. To this you can add on a 4-day cruise to the Bahamas. The total trip, which includes international round trip air, hotel accommodation, meals, sightseeing, visa charges, airport taxes, coach tours, transfers, entrance fees, and surface transportation, costs INR 113,800 ($1,900 USD) per person. Typically, visa requirements are the same as visiting the country, but cruise passengers can enjoy exemptions on certain destinations while they are in transit. 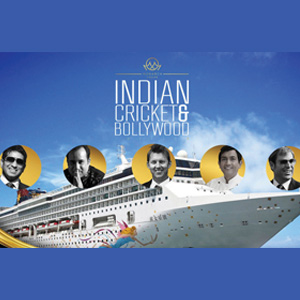 It’s a no-brainer…you give Indians Bollywood and cricket, and you have them in the palm of your hands! Monarch Cruise came up with this bull’s eye offering to lure Indian cruisers. And they even offer food and cooking lessons from celebrity chef Sanjeev Kapoor.

New era of desi cruises
While many cruisers are in search of value, others look for intimacy and luxury. In a recent article, Indian columnist and novelist, Shobhaa De, wrote about her experience traveling to Turkey and Greece on Azamara Journey. She especially liked the intimacy of not having too many people on the ship, its luxurious offerings, and international cuisine.

While some travelers want to get away from the familiar, others gravitate towards more of the same. Soon to be launched, Monarch Cruise recently announced India’s first ever cricket and Bollywood themed cruise with noteworthy names including Sachin Tendulkar, Shane Warne, Brett Lee, and Kumar Sangakkara. On board entertainment will include musical performances by acclaimed artists Rahat Fateh Ali Khan, Badshah, Neha Kakkar, and dance performances by Bollywood actress Neha Dhupia. Celebrity chef Sanjeev Kapoor will offer cooking lessons onboard. 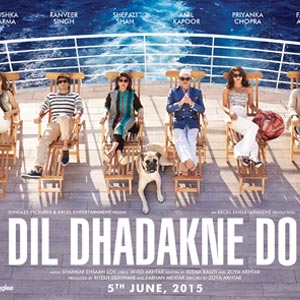 The Bollywood film Dil Dhadakne Do was one of the many recent catalysts to spike up interest in cruise vacations.

Future of cruising for South Asians
It is undeniable that Bollywood influences our imagination and consumption habits. With movies like Dil Dhadakne Do, Kaho Na Pyar Hai, and U Me Aur Hum, that have been filmed almost entirely on a cruise, more travelers dream of their perfect holiday while floating on a magical island through crystal blue waters. According to the World Tourism Organization (WTO), the cruise tourism industry is growing at an annual rate of 12 per cent globally. A study indicates that 1.4 per cent of inte national arrivals worldwide are cruise tourists. India accounts for 0.5 per cent of the world’s cruise market, and with rising disposable income, discovering the world on the seas is inevitable.

Come to think of it, with endless vistas, fabulous locations, around-the-clock food of all imaginable kinds, chockful of entertainment and activities… and a forced vacation from all the usual electronic entrapments of our modern lives including the formidable smart phone...what’s not to like about a cruise vacation?