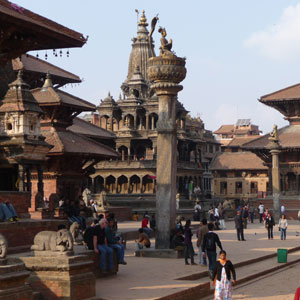 Nepal’s monarchs are gone, and so are the Maoists, but the Himalayan nation—known for its eclectic culture and stunning vistas—is still struggling to find its way forward.

The tiny Santakswori Bhagwati Temple, tucked away among the raucous alleyways of Thamel, lays out for the visitor some important aspects of the sociopolitical equation in Kathmandu. Beside the Ganesh shrine is a statue of the Buddha. Hindus and Buddhists coexist peacefully in this city, in this country. But plastered to a column facing the shrine is a less sanguine message—a poster, in shreds, of Prachanda, the Maoist leader who led the insurrection against Nepal’s monarchy (1996- 2006), and in 2008 became its Prime Minister. He has since fallen from grace (the Maoists were trounced in the November 2013 Constituent Assembly elections). The poster’s challenge—“There is a new God in town!”—rings hollow now.

I soon learn that much in Kathmandu is new. Where guards once stood outside deposed King Gyanendra’s palace, the Passport Office now stands, gateway for over two million Nepali migrant workers laboring in the Gulf, Kuala Lumpur, and elsewhere. In fact, the palace itself has morphed into the Palace Museum, and the Hindu Kingdom of Nepal is now a secular republic. Yet many of the people I talk to say that little has actually changed. The King may be gone, but as one shopkeeper said of the ensuing colossal power struggle between the Maoists and Congress, “We now have many little kings in the Constituent Assembly.” 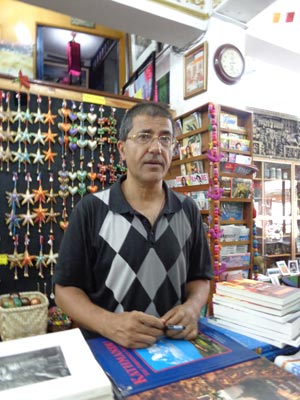 When I arrived, Samrat Upadhyay, Nepal’s acclaimed novelist and short story writer, a 30-year resident of the U.S. who writes only about Kathmandu, took me for a walk to his old neighborhood in Lainchour. We passed Ratna Park, and the author said, “This is where Pramod meets the woman who sells peanuts—and with whom he has an affair—in “The Good Shopkeeper.” This story in Upadhyay’s debut collection, Arresting God in Kathmandu, was my introduction to the city. I always imagined the park as a small, rather quiet place. I am surprised to find it sprawling and gated. Crowds press up against us as we walk. I find it hard to hear Upadhyay above the din of the traffic. I notice my mind beginning to draw a distinction between the Kathmandu of literature and the Kathmandu of fact. The author is a quiet man, and his city of words is a quiet city.

“Even as recently as 15 years ago, Kathmandu used to be a walkable city,” he lamented. “It’s not anymore. Growing up, Kathmandu was like a small town. It has grown into a city of roughly a million and a half. Near my house, there was even a field.”

Now there is only a dusty string of small shops. Nowhere is there even a patch of green. 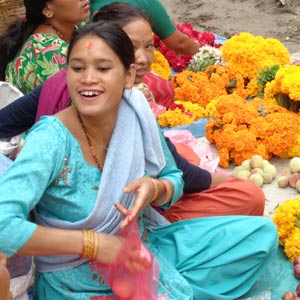 Despite the motor bikes buzzing down alleyways like Grand Prix participants who have lost their way, and the voluminous traffic that navigates in the absence of traffic lights, everything I know and love and sometimes hate about Kathmandu comes from my exploration of the city by foot and local transportation.

I awake at dawn, while all the 20-somethings in my guest house are still asleep (I am the lone 70-something), and head towards Durbar Square. Along the way, Hindus begin their day at small shrines doing puja and Buddhists circle their stupas, turning their prayer wheels. Kathmandu returns each morning to its ancient contemplative rhythms. The only other foreigners up as early as me are the Chinese, Kathmandu’s big spenders. They are out jogging, exploring, exercising in the cool air. The Chinese are the main buyers of my friend Sam’s thankas. (Thanka shops in Thamel, the tourist ghetto I inhabit, are as ubiquitous as noodle shops in my East Village neighborhood in Lower Manhattan.)

“If the Chinese weren’t here, all the shops in the city would close down.” Sam is certain of this. “There are plenty of Indian tourists, but they don’t spend money like the Chinese.”

Indians visit their northern Hindu neighbors, with whom they share an open border, to enjoy the relatively cheap prices and the beautiful snowy passes, the same as Western tourists. But they also come as pilgrims to visit Hindu holy places like Pashupatinath, the great Shiva temple in the capital. Nepalese can be prickly about India, the ambitious, all too familiar regional superpower it often accuses of political meddling in its affairs. (China, by far the greater superpower, guilty of pressuring Nepal to keep its Tibetans in line, gets off with a tsunami of shrugs.)

While struggling fiercely to maintain their autonomy, Nepalese find themselves steeped in their Indian inheritance. The main ruling party in Nepal is Congress. Brahmins still sit on top of the ethnic pile (a diverse pile it is: Newaris, Tamang, Ghurkas, Sherpas, and the indigenous Rai, among many others). Bollywood films continue to be popular. I think of Upadhyay’s story of how he ran away from home, all the way to Bombay, at age 14, to enjoy the sacrament of Bollywood storytelling at its source.

Even Nepal’s national dish, dal bhat, of which the New Orleans Café says with unashamed hyperbole, “22 out of 24 million Nepalese eat this twice a day,” consists of Indian staples: curry, lentils, pickles, rice. 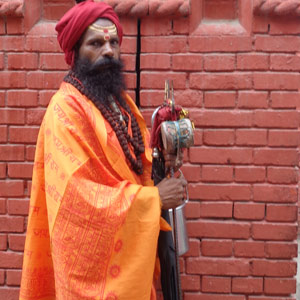 I have mixed feelings walking among the red, pagoda-like temples and old royal palaces of Durbar Square, also known as Hanuman Dhoka Square. The grandeur of Kathmandu’s Malla kingdoms stand frozen in time, a silent rebuke to the shabbiness of modern institutions of power that leave behind the disagreeable taste of manipulation but no beauty. It thrills me that the Nepalese haul Durbar Square into the living present. They don’t treat it like a museum. That said, the Hanuman Dhoka Museum, with its Hanuman swaddled in saffron at the entrance, and its royal artifacts, is one of Durbar’s main attractions.

Every morning, a little girl sells her sweets and women sell their flowers and fruit by the Kasthamandap Temple. Couples hold hands on the stone steps of the palaces. Sadhus and devout Hindus fill one of Durbar’s smaller temples by a side street raging with the companionable commerce of the poor—a street that will take me back to Thamel if I follow it without my usual digressions that always get me lost. 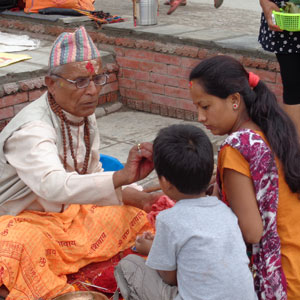 I am troubled that the past is so well preserved here while the present seems adrift. People complain that the new Constitution, promised since the fall of the monarchy by the Constituent Assembly, has yet to be drawn up. I think of the thousand or so “disappeared” civilians, and the other civilians killed in the war whose bodies were found, but whose murderers (government soldiers and Maoist guerrillas) have still not been brought to trial. Relatives of victims fear they never will be, as Nepal’s parliament voted last April to set up a Truth and Reconciliation Commission, under which those found guilty of war crimes could be pardoned. Given the partisan politics involved (Congress doesn’t want to see soldiers tried and Maoists are equally protective of their fighters), it will be hard for the judicial process to move forward.

Manjima Dhakal, at 22, belongs on my guest-house rooftop, where we meet, more than I do. But unlike the young Westerners diligently considering their next destination, she is focused on the disappearance of her father, Rajendra Dhakal, a lawyer in Gorkha. She was only seven when he was taken away by police, and accused of being a Maoist. His body was never found.

“Unfortunately, in the peace agreement that was signed after the war a higher priority was given to the political parties than to the war’s victims,” she said. “I don’t want to see more violence in Nepal. I want to see change within a parliamentary system. I want to see justice. Those who killed my father should stand trial. My father was innocent.” 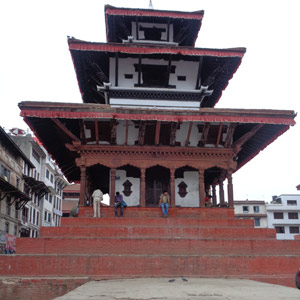 My interviews for this story take me to places in Kathmandu most visitors don’t get to. Places like Balaju Chowk, a dust-swept neighborhood of small shops selling cold drinks, and a “gas pump” across a beaten up bridge, where Ekraz Bhandari wants me to meet him. A middle-aged man with a trim, white mustache, Ekraz Bhandari belongs to the Communist Party of Nepal (Maoist). The lawyer once sat as an elected parliamentarian in the Assembly when the Maoists ruled the country. He opens the door to a white ramshackle building, and 40 years fall away. I am back in Latin America. On the wall, Marx, Lenin, Stalin. Also on the wall, Chairman Mao, whose party is building capitalism north of the mountains.

He makes me tea. He was not a Maoist fighter, he tells me, but a human rights worker in western Nepal during the war, monitoring army abuses. I ask him, ungratefully, about the human rights violations on the Maoist side: the killings of suspected army collaborators, and those too vocal in their opposition to Maoist tactics and ideology. “There were no Maoist abuses, I assure you.”

I raise my eyebrows in cold disbelief. I am here because Bhandari’s son, a 20-year-old science student at the University of Nepal, was killed by the government during the war. I am here to talk about that, but how can I avoid this? I persist. I keep bringing up cases of Maoist abuses, and he keeps shaking his head.

Finally, with the smallest of smiles (courtesy? surrender?), he concedes: “It’s possible there were abuses.”

I ask him what he thinks should be done to those who killed his son. He does not have a ready answer. His fingers form a tent over his lips. I see indecision, but no anger.

“Before I decide anything, I would like to talk to them, talk to them about what they did, about what they believe. The killing of my son was not personal, it was political. He was killed because of his politics, and it’s the politics of Nepal that has to be changed.”

After our conversation, he insists on taking me to my guest house on the back of his motor bike. The thought horrifies me, but Bhandari won’t yield. “In Nepal, we say the guest is God.” He catches himself and laughs. “Of course, I am a Marxist, and I don’t believe in God. But I am still Nepali, so please…”

I get on his bike and cling to the Marxist for dear life.