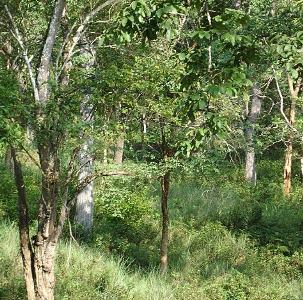 SUSHEELA SRINIVAS enjoys going on weekend trips for fun—and for glimpses of flora and fauna. Bengaluru, where she lives, may be congested and noisy, but the sprawling concrete jungle’s proximity to wildlife sanctuaries is a big plus, allowing her to get away at a moment’s notice for both exciting safaris and restful stays at lodges and resorts.

This time I was beckoned by the promise and thrill of K. Gudi Wilderness Camp, just 225 km (around 140 miles) away. Little did I know that the weekend spent here would humble me so, making me respect the environment even more and come back with a deep sense of gratitude for the wonder of creation.

In a bid to promote ecotourism, the motto of the Jungle Lodges and Resorts comes across loud and clear in the details provided on their website. Deviating from the usual sanctuary experience, here one has to sync with nature and not approach it with preconceived ideologies of city luxuries. It is designed in such a way that there is minimal invasion of the jungle surroundings. 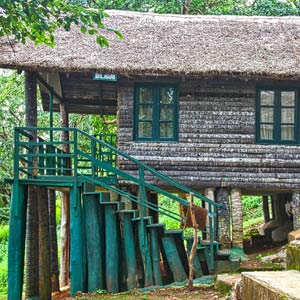 Calling ahead to inquire further details, I was also informed that the accommodation would comprise log huts (shown at left), tent cabins, and rooms in the main building—all few in number. Electricity was limited, as provided by a generator, with complete blackout after 10 pm! Only lanterns and torches are used to guide people through the night in the cabins. And typically, no one ventures out after 9:30 pm. “Be ready with a stout heart”, cautioned the friendly and helpful voice over the phone, adding, “and the experience can transform you!”

The K. Gudi (or Kyathadevara Gudi) camp is situated in the deep forests of the Biligiri Rangana Hill (BR Hill) sanctuary, declared a tiger reserve to protect the diminishing number of wild cats. The sanctuary, nestled at the confluence of the Eastern and Western Ghats, boasts of ecological measures taken to preserve the pristine climes and is home to tigers, elephants, leopards, deer, bison, and various species of birds.

The forests are also rich in a variety of trees like sandal, teak, rosewood, medicinal herbs, and plants. A number of snakes, langurs, and boars also find their home amidst this rich belt.

An early start ensured that my enthusiastic family and I hit the highway without any hassles and also enjoyed the crisp, cool morning air. The lush fields and panoramic view were the added bonus throughout the drive even as I looked forward to reaching the camp.

No sooner did we enter the forest reserve area than we slowed down, and a hush settled in automatically as we drank in the sounds of the forest. 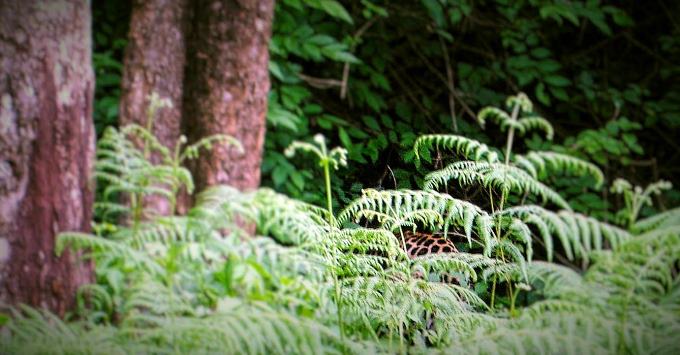 All of a sudden, just a few meters away, something yellow was quietly and stealthily crossing the road. Coming to a sudden halt, we peered to behold a young leopard passing by! Transfixed, we just stared at the sight and by the time I gathered my senses to grab the camera, all I could capture was the tail of the cat vanishing into the foliage.

My, what a welcome it was! An inexplicable thrill ran down the spine; at the same time it felt as if a warning was being sent to us to be cautious and respectful of the rules of the jungle. Discussing the thrilling experience animatedly, we reached the rustic wooden gate of the camp to a warm welcome by the resident staff—trained, experienced, and dedicated professionals who loved every day they spent in the forest. 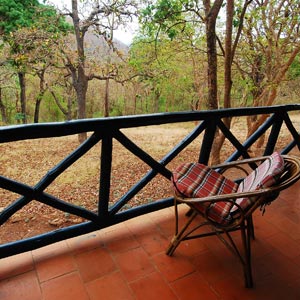 (Left) A view from the porch.

Soon we settled into our tent cottage, and assessing the neat and tidy accommodation I found a comfortable bed, a couple of chairs, a table, and a decent attached bathroom. All the furniture was sourced from locally available material and blended well with the environs.

Electricity was limited to a few hours and there was no scope for air conditioners, laptops, or TV. There were no phones in the room either, lest the ringing disturb the tranquility of the forest—the first lesson had begun. I hardly felt the pinch as the luxury of the forest was unmatched.

Lunch was to be served at a common enclosure called the Gol Ghar (round hut) where staff and guests gathered together to eat. The second lesson—life in the forest was a community affair and not cocooned in your little world. The food served was simple yet splendid, and filling. The food, spread in a buffet, was sourced from locally grown and available ingredients, thereby preserving the ecological biodiversity and minimizing food miles.

Over lunch, we met fellow guests and shared experiences. That afternoon, the focus was on us with our sighting of the leopard! Leopards are a rare sight, and more so crossing the roads, we were told. Perhaps the young one had wandered off or was eager to mark its territory—one never knew. It was his little secret of which we were an unexpected part, and we couldn’t keep from sharing!

Postlunch found me lazing in a hammock strung across shady trees, amidst bird calls, buzzing insects, and intoxicating surroundings.

Early evening we gathered for the safari, a threehour long drive through dense forests with the expertise of Kumar to guide us. Yet again, lessons to be followed were to completely shun mobile phones, dress in hues to blend with the surroundings (greens, greys, and browns), and speak in soft tones.

He apprised us that animals, unlike us, were very sensitive to the signals from gadgets; moreover, their keen sense of hearing could pick up our talks from far and make them feel threatened. So it was essential we follow all these rules to the T when amidst them.

It was a fruitful venture as we got to sight turtles, bald eagles, spotted deer, barking deer, and elephants. The guide used his assigned radio to update the other safari vehicles and the main office about the position of his group and sightings of the animals.

Excited and famished, we returned to base camp to steaming cups of tea, snacks, and a screening of a wildlife expedition movie.

Dinner again saw us seated at Gol Ghar, now with lanterns and blinking glow worms. The pathways were lit with lanterns, and our guide escorted us on an eerie and thrilling night walk within the camp. He helped us spot owls and giant squirrels high up on the trees.

Returning to the room, I found spiders slowly crawling out of their hiding and paying us a visit. A big snail had ventured for a nocturnal walk through the holes in the sink. We acknowledged each other’s presence without a murmur!

By now, it was pouring outside. The sound of the raindrops lashing the roof made me wonder about all those animals out there that had learnt to adapt in the wild without disrupting anything. Who was more intelligent? Man or animal?

Just as we had been told, lights went out by 10 pm and everything turned black. The suddenness took us by surprise, and we sat still, not even thinking about reaching for the torch. Slowly the brain, teaming up with the eyes, began to see in the dark and the other faculties began working in top gear to keep up—a great adaptability that we hardly notice in our artificially illuminated world. 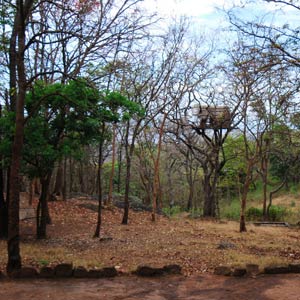 (Right) A machan in the forest.

Silence fell all around, only broken by the sounds of the forest at nighttime. Perhaps, not far away the young leopard had dragged its kill up the tree; perhaps the elephants were standing still, braving the rain to protect their young ones standing under them; perhaps the deer had lost its life to the hunger of the unseen tiger; perhaps … was it really silent out there? It was teeming with activity and life! The silence was within me. The silence of realization, of awe and respect; the silence of survival. 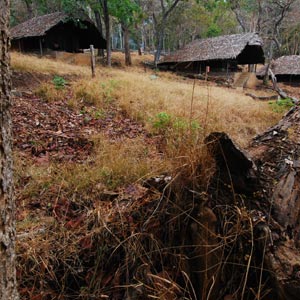 An inexplicable exhilaration kept me awake for most of the night as I paid attention to every tiny sound I could hear. The morning broke with the birds chirping and calling in strange languages. It was time for another safari: this time, morning encounters with many birds, bison, elephants, and more deer. Alas, neither the leopard nor the tiger deemed it fit to pay us a visit.

Soon it was time to leave. Despite a strong longing to stay back, we had to return to our concrete jungle. The short stay had cast a strange spell on me besides a feeling of renewed sense of respect and awe, for there was so much to learn and imbibe from the jungle—and I had taken hardly a few baby steps. I could now fully understand Kumar’s enthusiasm when he told us, “I wouldn’t trade anything in this world for this life.” 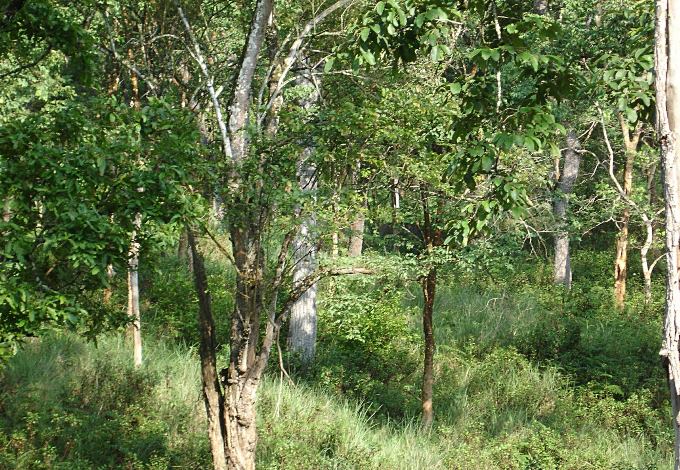 Susheela Srinivas is a freelance writer based in Bengaluru.