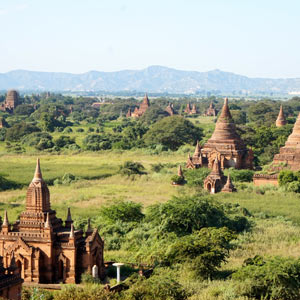 Kaala Pani is such a storied place in the narrative of India’s independence struggle. Visiting that infamous jail was a humbling experience. The iconic pagodas of Myanmar, on the other hand, inspired awe.

Growing up in northern India, I did not have much of a chance to explore the south. So, when the chance of going on an 11-day sea expedition cruise to the Andaman Islands came to my attention, I jumped on it!

It was a culture and adventure oriented cruise line rather than a floating amusement park. The Silversea Andaman Sea Expedition offered basic luxuries as expected on cruises aboard this yacht-style Italian ship. But it was different, considering there were on-board expedition leaders, who were experts in history, botany, birds, sea life, and more. Each day, there were several guest lectures on the ship to prepare travelers for what they were about to experience. There were also recap discussions about the key learnings from our visits. 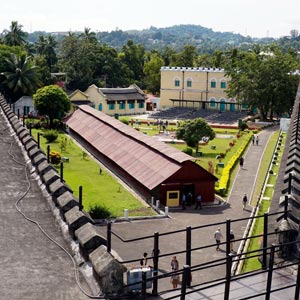 Port Blair – Kaala Pani, The Infamous Jail
Our first stop is Port Blair, the capital of Andaman and Nicobar Islands in India. The group of 36 islands has been inhabited for the past 60,000 years, yet little is known about the tribes that live here. Only the infamous Cellular Jail has made headlines. This is where the British East India Company Army held Indian political prisoners in solitary confinement. It was believed that no one who crossed the Andaman Sea over to Port Blair ever made it back alive, hence gaining the nickname Kaala Pani or black waters.

Walking along the lonely hallways, I could only imagine what our ancestors went through bearing inhumane tortures, all for the sake of our freedom. Names of freedom fighters from all over India were listed by the states they hailed from on the pillars of the jail. Those who survived the British Raj remained in the penal colony and started a new life here.

In most respects, Port Blair feels like any other city in coastal India. Coconut trees on wild beaches, women dressed in colorful saris, sounds of honking cars, delicious aroma of dosa (savory pancakes) and curry, all seemed much too familiar. In recent years, adventurous Indian tourists have gained more interest in the marine activities offered around the islands. From Port Blair, jetty boats shuttle to neighboring Havelock and North Bay islands where vacationers snorkel, kayak, dive, jet ski, or simply lie on the beach.

Ross Island – From Paris to Forsaken
Another popular attraction nearby is Ross Island. Once known as the Paris of the East, Ross Island was the administrative headquarters of the British while they kept a watchful eye on Cellular Jail. Now, there are only remains of its opulence – a church with stained glass windows, a bakery serving French croissants, a clubhouse where the general public gathered to drink and play, a self-sustaining water purifier, etc. along with wild deer, peacocks, and rabbits. Every evening there is a sound and light show that brings the island back to life with vivid colors and Bollywood style narratives. 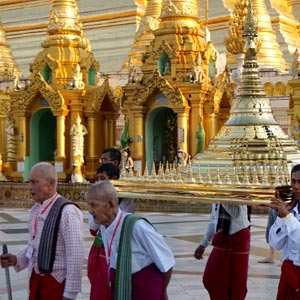 Myanmar – Open for Business
Our journey takes us further north to the country of Myanmar (formerly Burma). The first thing that comes to mind is a song from a 1949 film, Patanga, where the male lead goes to Rangoon (now Yangon) to serve during World War II, while his beloved misses him, singing “Mere piya gaye Rangoon…”

Things haven’t changed a whole lot in this country since the 1940s. Myanmar recently lifted its embargo on foreign tourists and opened up its borders. The largest city, Yangon looks like what New Delhi would have 70 years ago. There are a few buildings and hotels, clean roads, gardens, teashops, and no international brand names. What you do see is very friendly men and women dressed in traditional longyis (similar to Eastern Indian lungis) with thanaka (multani mitti or Fuller’s earth) rubbed on their faces as makeup/ sunscreen. Here, the nomadic fishermen still live on traditional boats, while the working class commute to the slum-like dwellings in the township of Dala across the river.

Yangon – Land of Golden Buddha
Most sightseeing in Yangon is centered around Buddhist pagodas and temples. At a length of 217 feet, Chaukhtatgyi Buddha Temple houses one of the most revered reclining Buddha statues in the country. It is a colossal gold colored statue with a diamond and precious stones encrusted crown that attracts visitors from all over the world.

Myanmar is a Buddhist country, with Muslims and Hindus forming the rest of the minority population. Most Burmese people are Theravada Buddhists, and many also follow practices that originated in Hindu astrology. The Burmese worship animals that represent the day of the week when they were born: garuda (bird) for Sunday, tiger for Monday, lion for Tuesday, tusked elephant for Wednesday morning, tuskless elephant for Wednesday afternoon, mouse for Thursday, guinea pig for Friday and nãga (snake) for Saturday.

Only at Shwedagon Pagoda do I realize the importance of gold in Mon architecture that was prevalent between the 6th and 10th centuries CE. Stick-on gold leaves that remind me of those atop shiny barfis (Indian fudge) are sold outside most religious monuments and are glued onto the statues as offerings. It is believed that by building or donating to the pagoda, you will receive blessings, and take a further step towards salvation. On a weekend, there are families organizing prayers for their loved ones, taking a child in a procession for his monkhood inauguration, and couples offering waterlilies to the shrines. Shwedagon Pagoda is the most sacred Buddhist pagoda in Myanmar, as it is believed to contain relics of the four previous Buddhas of the present kalpa (aeon).

Culture – Blends of the East
We dine at the Karaweik Palace, a majestic building by the lake in the shape of a royal barge. Every evening, there is a cultural program organized for visitors, which includes traditional crafts, international buffet, and live dance performances. Many of the Burmese dances have Indian influences, as cultures intermingled for centuries. The bilu dance (of demons or ogres) is said to have originated from Desagiri, a demon in the Ramayana, while the kinnara and kinnari dances are based on mythical birds with human head and torso referenced in Sanskrit literature.

Burmese food offers familiar flavors to those who are well versed in Bangla cuisine. With influences of India, China, and Thailand, local dishes must have a balance of four primary flavors: sour, salty, spicy, and bitter. Spicy lentils, curried fish, thick noodle soups, rice, and leafy green vegetables are staples at a family-style Burmese dinner table. I personally couldn’t get enough of the Shan noodles, a stir-fry of wide rice noodles with chicken, tomatoes, and spices; river fish seasoned with shallots, ginger, garlic, and turmeric, then fried whole with more spices; and a unique Pickled Tea Leaf Salad with tomatoes, roasted peanuts, fried ginger, chickpeas, sesame seeds, and of course, pickled green tea leaves. Most midrange restaurants are known as teahouses and serve traditional Indian dishes, as well as Indo-Burmese fusion.

Bagan – The Ancient Capital
Early one morning, I take a flight from Yangon to Bagan (formerly Pagan), also known as the city of temples. Soon, I am surrounded by over 2,000 ancient structures built between the 9th and 13th centuries. Here I can see the evolution of Burmese temple architecture from Andhra style hollow cylindrical temples with bejeweled umbrellas, to solid dome shaped stupas. Bagan was the capital of the Pagan Empire about a thousand years ago, and only a fraction of the 10,000 Buddhist temples and 3,000 monasteries they built still stand today, mostly destroyed by periodic earthquakes.

I climb a series of five steep steps to the top of Shwesandaw Pagoda for a panoramic view of the surrounding temples spread across the plains of Bagan with the Irrawaddy River in the background. I spend the rest of the day admiring the intricate carvings, painted murals, and inscriptions inside some of these temples.

The Coast – Sunsets and Beaches
After a deep dive into history and religion, the ship steers toward the coastal areas. Myanmar has 1,200 miles of coastline and an expansive coral reef in Mergui Archipelago. Beach resorts in Myanmar have become immensely popular with Asian and Western visitors as they are often unspoiled, offering seclusion, crystal clear waters, picture perfect sunsets, and a range of accommodations from beach huts to luxury resorts at relatively affordable prices.

Lampi Island is the only marine national park in Myanmar, and is home to over 1,000 species of animals, plants, and marine life, as well as occasional sea gypsies. We leave our ship and take a Zodiac cruise through the mangroves, listening to the singsong of Andaman birds residing in 200-year-old trees. The staff on the ship also organizes a lunch at the beach on Shark Island, another uninhabited island in the southern coast of Myanmar. With no one else in sight, we enjoy the secluded white sand beaches and turquoise blue waters against the backdrop of a thick forest, while sipping on cocktails and nibbling at the grill. 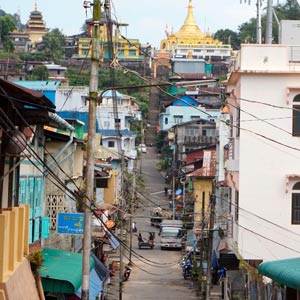 (Left) The town and streets of Kawthaung.

We finally approach our last destination as the ship docks at the southernmost point in Myanmar, at the border of Thailand. Kawthaung looks akin to an Italian seaside resort, with small houses nestled along a slope and golden domes instead of church clock towers. It has more Muslim influences than the rest of Myanmar, which can be seen at halal restaurants and shops selling scarves and jewelry.

As I look through hundreds of pictures I have taken, I feel lucky to have visited these areas before they become overpopulated with tourists.