Travel: My Journey to The Last Continent 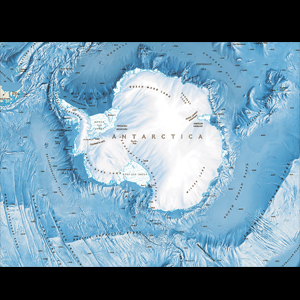 Thanks to modern tourism, one can experience the rugged beauty of Antarctica the coldest, driest, and remotest continent, juxtaposed with savoring homely indulgences like uttapam, poori-chana, and chicken tikka masala. Of course, it is the breathtaking vistas and wildlife of the planet’s final frontier that will stay in your memories long after the comfort of the gastronomic experiences have been forgotten. 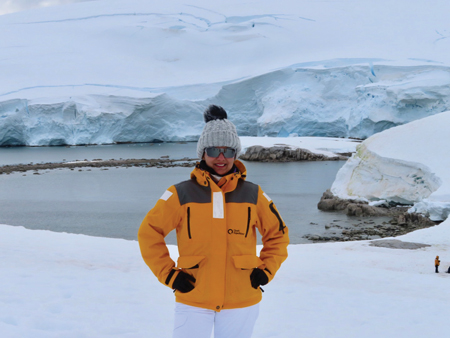 My fascination with Antarctica has stemmed from countless hours of watching National Geographic and BBC documentaries about the frozen continent. In each episode, remote penguin colonies showcasing unique parenting behaviors, the impact of climate change on mammoth glaciers, and tales of endurance by the Irish explorer Ernest Shackleton transported me to what seemed like another planet.

[Right] “Physically going to Antarctica felt like an unattainable dream. I had only heard of scientists and researchers traveling there for
coveted missions,” says author Sucheta Rawal. (Photo courtesy:
Sucheta Rawal)​

Physically going to Antarctica had felt like an unattainable dream. I had only heard of scientists and researchers traveling there for coveted missions. 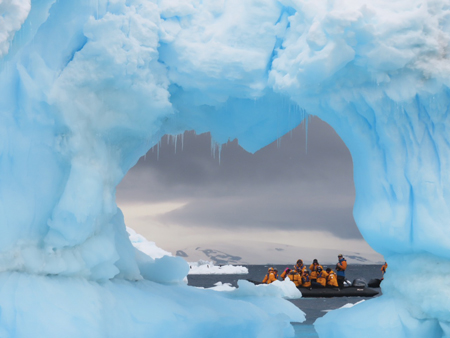 Though tourism in Antarctica started in the 1960s, it was very rare, remarkably adventurous, and exorbitantly expensive. In 2000, an estimated 15,000 visitors took sea cruises and sightseeing flights to Antarctica. This number had more than tripled by 2020. With more companies offering comfortable, and relatively affordable expeditions, both demand and supply have risen for travel to Antarctica.

[Left] Dramatic icebergs and other vistas are the payoffs for those who venture to this end of the world.​

The southernmost, the coldest, and the driest continent is also the most desired bucket list destination for adventure travelers. It is often “the 7th continent” to be checked off, as was the case with me and my fellow travelers. 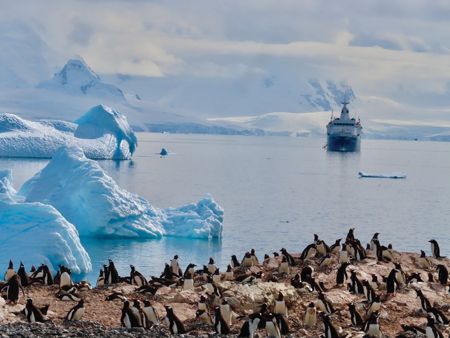 Most people still travel to Antarctica by cruise ships with the journey beginning in Argentina or Chile. The eight- to 25-day-long sailings cover a number of destinations including South Georgia, the South Shetland Islands, and the Falkland Islands, crossing the rough waters of the Drake Passage, and then landing on the Antarctic continent.

[Right] A visit to a penguin colony. (Photo: Sucheta Rawal)​

Being prone to seasickness, I picked a less intense, though equally adventurous option, to fly-cruise to Antarctica. From Atlanta, I first flew to Santiago in Chile and then was connected to Punta Arenas, a port city and capital of the southernmost region in Chile. Here, I was received by the staff of the expedition company and taken to a luxury hotel overlooking the Magellan Strait for a day of rest and orientation. As part of our package, the passengers were provided all-terrain waterproof rubber boots and heavy-duty yellow parkas to endure the unpredictable weather in Antarctica. Even in peak summer, there may be high winds and snow, we were warned. 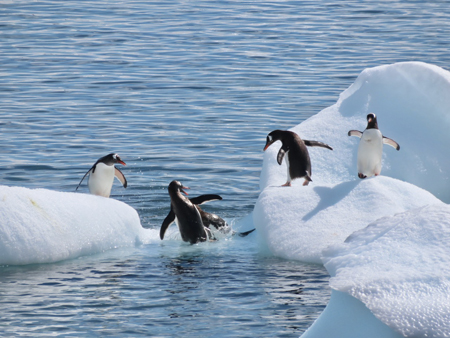 Before dawn, we packed our bags, dressed in layers, and headed to the airport to board a two-hour private charter flight from Punta Arenas to King George Island (KGI), a military base in Antarctica. But flying to Antarctica didn’t turn out to be that straightforward. Foggy weather made it impossible to land on the makeshift runaway on KGI, and it took many attempts over the next few days to reach our ship.

[Left] A visit to a penguin colony. (Photo: Sucheta Rawal)​

Five days later, when we did make it to Antarctica, we were greeted by 40 mph gusty winds and belowfreezing temperatures. For the first time during my travels, I second-guessed my adventurous spirit. 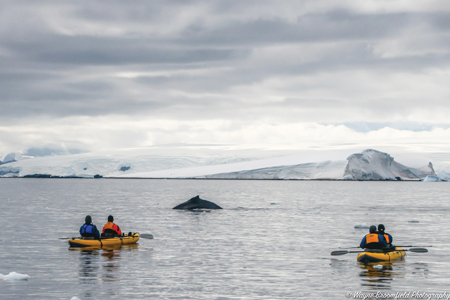 Up Close With Wildlife

The next morning, when I woke up in my Superiorclass cabin on the Ocean Adventurer ship, all doubts had washed away. The wind had come to a standstill, the sun was shining brightly, and the temperature had risen to just above freezing. There was pin-drop silence. I couldn’t hear anything but the calving sounds of thousands of years old glaciers.

Flightless penguins popped their heads in and out of the clear water, effortlessly swimming around our ship. It was magical! Here I was, one of the privileged few to set foot on the earth’s final frontier. 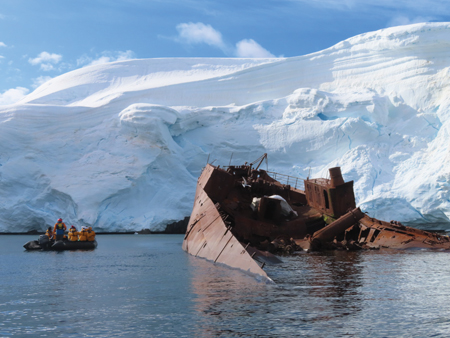 Over the next few days, the ship sailed short distances to landmarks around Antarctica, unfolding completely different sceneries and wildlife with each landing. I walked among penguin colonies that were oblivious to human presence and went about their daily routines. In January, penguin chicks had already hatched into the young brown feathered creatures which nested overlooking the cold waters as mom and dad kept a close watch. I sat by myself for hours, closely observing the antics of the Chinstrap, Adélie, Gentoo, and Macaroni species of penguins. They pointed their beaks toward the sky, made ecstatic calls, waddled along the beach, and coaxed each other to jump into the water in play.

Groups of passengers left the ship twice a day for zodiac cruising, hiking, kayaking, bird watching, whale watching, and walking, accompanied by an adventure guide. We all captured shots of the cute Wedell seals and the predatory Leopard seals lounging on drifting icebergs, secure in their natural habitats.

Humpback whales breached and slapped their tails in front of me, as I kayaked in the transparent waters. Never before I had come so close to making eye contact with this 60,000-pound mammal! 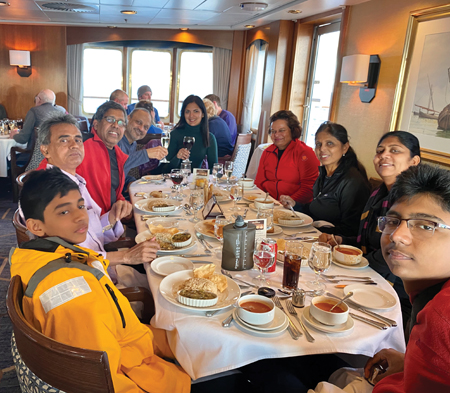 The landscape in Antarctica changes rapidly—from barren volcanic mountains and rocky beaches to dramatic icebergs and snow as far as your eyes can see. Over 98 percent of the continent is covered with ice. The snow accumulates over thousands of years to make thick ice sheets, while ice shelves fringe much of the coastlines.

The best way to describe the scenery in Antarctica is a constantly evolving, open-air museum. Icebergs of all shapes and sizes appear as floating sculptures with ever-changing shades of blue and white based on how the light hits the ice.

“Seeing a place free of pollution, garbage, and hunters was fantastic and helped shape my opinions on environmentalism,” remarks Renuka Madireddi, one of the passengers I met onboard who shared my passion for travel. Madireddi was visiting Antarctica with her husband and two boys, ages 12 and 14, from Chennai, India. The family had traveled to the other six continents already. “It has always been our fondness to be close to nature in all its wonder and glory. Antarctica is nothing but pristine! There is no other place in the world without flora that is this beautiful,” she claims.

Together, we stepped onto the continental landmass and raised the Antarctic flag to declare our arrival.

My ship had 128 passengers from around the world, including 11 South Asians. We gravitated towards each other over communal-style meal times as the ship’s Hyderabadi head chef surprised us with delicious uttapam, poori-chana, gobi aloo, pulao, and chicken tikka masala.

Nowadays, you can find an Indian restaurant at most destinations around the world. But there is no hotel, restaurant, or grocery store in Antarctica. “We were apprehensive about the food onboard, so we had brought along ready-to-heat-and-eat packets, but never got a chance to use them,” says Madireddi whose family is pure vegetarian. Also vegetarians are Gunjeet Singh and Reena Kaur Khalsa from Arizona who were among the travelers. Baptized as Sikhs through a ceremony known as Amrit Sanchar, the young couple 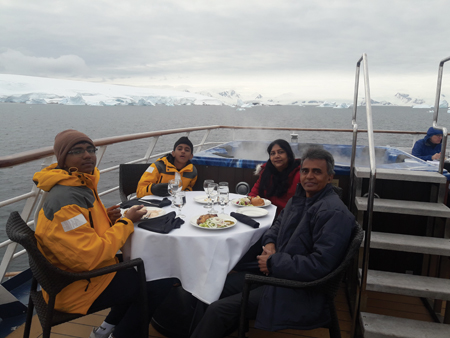 followed a strict dietary plan and dress code of all-white, even during their world travels. The Indian vegetarian food prepared for them soon caught the attention of other guests, and we all desired spicy, flavorful curries while sailing past some of the most majestic sights in the world.

[Right] “We were apprehensive about the food onboard, so we brought along eady-to-heat-and-eat packets but never used them,” says Renuka Madireddi of Chennai, India seen here with her husband and sons.​

Every evening, the expedition leaders educated us about aviary, geology, wildlife, whaling history, marine life, and more. These brief lectures helped enforce what we had observed in the outdoor classroom. Antarctica is one of the only places on Earth where there is no permanent human dwelling and nature has been left alone, though human activity in other parts of the world has had an impact here as well. According to the European Space Agency, warming temperatures, warm ocean water, and declining snowfalls don’t allow glaciers to replenish. In February 2020, an iceberg, said to be a most as big as the city of Atlanta, broke off Pine Island Glacier.

During our trip, we were told about sustainability efforts in Antarctica as mandated by the International Association of Antarctica Tour Operators (IIATO), a governing body that oversees the actions of all tour operators in the area. We weren’t allowed to carry any food off the ship or leave any garbage behind. We maintained a safe distance from the animals, never fed them, or tried to touch them. We also always washed our boots when entering and before leaving the ship. 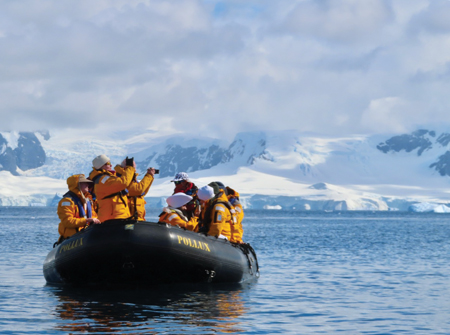 [Top] A Sikh family from Arizona maintained strict dietary and an all-white Khalsa dress code—seen here during a Zodiac cruise to explore the terrain and wildlife.​

I had started planning my trip to Antarctica a year in advance. The season operates only from November to March, and there is a limited number of passengers allowed on each carrier. Fly-cruises tend to sell out quickly as they have less capacity. Also, it is better to be on a smaller ship with less than 200 passengers as some of the larger ones don’t allow passengers to make any landings.

The next thing you need to decide is the type of cabin to book. Most ships offer basic, though comfortable rooms, and the option to be paired with a roommate. In the past couple of years, luxurious new cruise lines
have introduced new ships that feature balcony rooms, butler services, fully equipped spas, and Michelin-style meals. 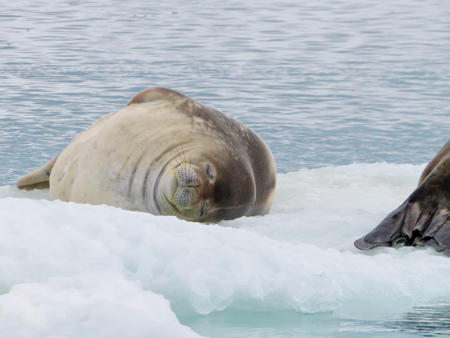 Travel insurance is mandatory for expedition trips as delays and cancellations are common. It is also good to let your family, school, and employer know that your vacation may exceed the plan. Though my trip was initially planned for ten days, I ended up staying for two weeks due to delays.

[Left] Up close to seals - pic by Sucheta Rawal.​

Most of all, savor each and every moment at one of the most pristine places in the world and think about how lucky we are for not having to weather rough seas, starvation, and disease like the great explorers before us did. Today, less than 50,000 people visit Antarctica each year. Of them, ten percent fly and only one percent step on its interior. I feel incredibly lucky to have checked off my seventh continent.