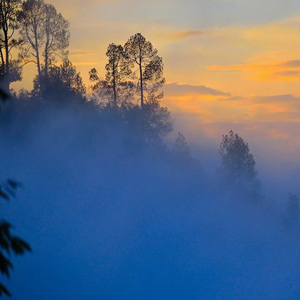 Even a short foray into its periphery leaves one in awe of this mighty range— while offering a glimpse of the mountain life, a little bit of adventure, and some intriguing stories.

I don’t consider myself a dyed-in-the-wool patriot but when I hear someone talk about mountains in their own country, I cannot help a smirk. “You have not seen the Himalayas!” I say to myself.

Growing up in Delhi, they were close by—just a day or two away, perfect for Delhiites to make their escape from the scorching summer heat. As a family we made trips to these vacation spots in the Himalayan foothills, but it was during treks that I made a closer acquaintance with the mountains.

Decades ago, after walking through forests trails for days we reached the tree line. I found myself at the edge of a clearing from where mountains peaks rose up in all their majesty. I can still feel the awe that sight inspired. I felt that I was in the court of a power so immense that I ought to kneel down. No wonder, I thought, there are so many myths that say that the gods live in the Himalayas.

Now in a different phase of life, a mother instead of a backpacking student, I got the chance to see these mountains once more. A trip that took us from train to car to jeep finally brought us to Jhaltola in Kumaon, a place I had never heard of before. The road snaked along and through the trees I could make out red rooftops in the distance––we were nearing our destination, Misty Mountains.

Summer paints a lovely picture here and we were greeted by blooms of all colors—hydrangeas, creeping roses, and many other flowers that I could not name. “That range is Panchachuli, there’s Nanda Ghunti...” our hostess, Ambika, named all these peaks with easy familiarity, pointing out the features of each, as our eyes, accustomed to the flat landscape of the plains, took time to distinguish their varying contours. After hours on the road, this was the perfect antidote to fatigue, a panorama of silver peaks against a blue sky.

The cottage-style accommodation at Misty Mountains is dotted around an area that is a perfect vantage point to take in the different ranges of the Himalayas––Gharwal to the left, Kumaon at the center and away to the right, the ranges of Nepal. 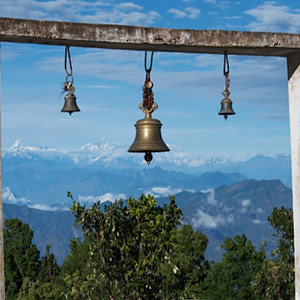 The panoramic views from Misty Mountain reminded the author of the thought that had crossed her mind the first time she had seen these humbling vistas as a young backpacking student: “I felt that I was in the court of a power so immense that I ought to kneel down.”

“He walked all the way to Tibet? Why did he have to do that?”

We were reading a clipping in the dining hall about the reserve where Misty Mountains is located. The land, according to the account, was bestowed upon Pundit Nain Singh Rawat as a gift for a vital mission he had undertaken in the service of the British Raj. In the guise of a Tibetan monk, he had made the perilous journey to Lhasa entirely on foot. The clipping provided an intriguing but incomplete tale.

Many months later, I stumbled across more information about Rawat’s journey while reading Peter Hopkirk’s Trespassers on The Roof of the World. Difficult as it is to imagine in our age of smart phones and Google Earth, in the 1860s, the British cartographers had no accurate information about Tibet—an embarrassment, as both Russian and British imperialist forces were vying to control it. Tibet, fearing these outside forces, had closed in on itself. Foreigners who tried to infiltrate its borders were punished by death. In this scenario the British trained a very intelligent and resourceful young man from Kumaon to become what Hopkirk calls an “unholy spy,” equipping him with ingeniously modified monk’s rosary beads and prayer wheel to take geographical readings. Rawat was the first to provide the British with the accurate latitude and altitude of Lhasa. And the reason for making the entire journey on foot? It was to measure actual distances as he was trained to take strides of the same length, whether he was going uphill or downhill. The panoramic views from Misty Mountain reminded the author of the thought that had crossed her mind the first time she had seen these humbling vistas as a young backpacking student: “I felt that I was in the court of a power so immense that I ought to kneel down.” 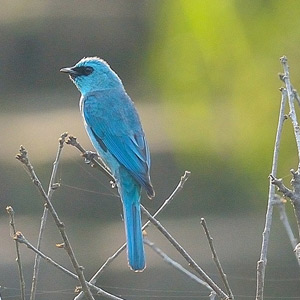 …bird watching or simply chilling for those who just want some rest and recuperation.​

Now, a part of the land gifted 150 years ago to the resourceful Rawat has been developed by an entrepreneurial couple, Madhur and Ambika Chabbra into Misty Mountains, a holiday retreat that is very different from the “hill-stations” that vacationers from the plains flock to. Free of distractions like Wi-Fi and TV, the main attraction here is the great outdoors. In an area that boasts of 150 different bird species, we thrilled to the melodies of a host of bird calls. Some birds were easy to spot with the naked eye but for others we needed the help of my brother-in-law’s camera. An avid photographer, he captured beautifully colored sunbirds and flycatchers as well as cleverly camouflaged birds like the bar tailed tree creeper. 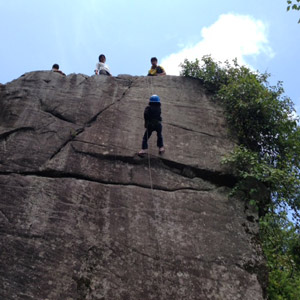 Ladder climbing, valley crossing, and rappelling gave our children their very first taste of adventure sports. As Madhur expressed it so aptly, you can be as active or inactive as you like out here. In between these activities, I would often lose myself between the pages of a book or spend time simply gazing at the vista before me, the mountains taking on a different hue Rock climbing and zip lining—for those seeking adventure… with every change in light, at times clear and at times shrouded in clouds.

A steep 3 km walk and we were at Lamkeshwar. The spot offers a spectacular view of the Himalayas as the ranges, some close by and some far-off, surround one on all sides. A temple dedicated to Shiva stands there. We eased into conversation with the old priest who takes care of it and has been there for more than 30 years. We sat in his simple abode while he told us about the different pilgrimages he had made. “This is my world. I don’t go anywhere,” he said.

Mountains do lend themselves to solitude and reflection.

On the way downhill my mind went back to a conversation that I had overheard at a hotel in Kathmandu. I was accompanying a group of tourists and as we waited for our tour to start I saw a hotel guest walk up to the reception.

“I want to hire a taxi for the Mt. Everest.”

“Sir, there are planes rides to the mountains to view Everest but there are no taxis.”

I pitied the young Nepali woman at the reception and I wondered what she made of all these people who came to the mountains without an inkling of their vastness and their remoteness.

That fact was brought home yet again when we visited Avani, a nongovernmental organization that works to enhance the livelihood of people living in the far flung villages of the region. There were beautiful wool and silk scarves and stoles for sale in their store. In the weaver’s hall we saw women at different looms and they let us try our hand at them, just to sense what it feels to work a loom. All the raw material that goes into the making of these gorgeous fabrics is worked on by hand. I watched a couple of women come in with big baskets on their backs, filled with bales of wool and I thought of the huge effort that goes into creating these pieces—each basket has to be carried from the road head to the village on foot, very different from pulling into your driveway and unloading the car.

Further along were the Patal Bhuvaneshwar caves. Water has sculpted different shapes in the rock face of the underground caves and each form is associated with a story from Hindu mythology. Fascinating as these shapes were, the trappings of a temple site with its blaring loudspeakers and rows of shops selling religious souvenirs jarred our senses after the serene mood of the past days. I was in a hurry to get back to the tranquility of Misty Mountains.

While we’d been away, Ambika had been busy creating magic in her kitchen, whipping up local dishes like thechwani and aloo ke gutke. During our stay, she surprised us often with some new treat from her kitchen. She tends an extensive kitchen garden and in her care the abandoned orchards have been coaxed into bearing fruit for her homemade preserves and jams.

As we lingered over the meal, chatting with Madhur and Ambika about books and wildlife, I basked in the beautiful setting of our holiday, made all the more special by this young couple’s warmth.

Now based in the Atlanta area, Aruna Padmanbhan is a freelancer who writes about the diaspora from having lived in India, China, and Singapore. She and her family have a penchant for eco-tourism.