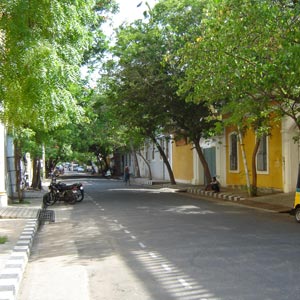 Pondicherry, or Puducherry, is a charming little town tucked away in a quiet corner of Tamil Nadu, though it remains a union territory. Pondy, as it’s better known, retains a fascinating French flavor and is great for leisurely strolls.

Picture pretty, compact, and laid back, Pondicherry (Tamil Nadu) is full of happy surprises for the discerning traveler. Steeped in European influence since the 16th century, there is clearly a Mediterranean feel about this little seaside town. Puducherry, as Pondicherry has been renamed, is small compared to other Indian cities. With its quaint streetscapes and unique building façades, Pondy, as it is popularly called, is a salad bowl of architectural expression, a picturesque reminder of its vibrant and checkered colonial past which included the Portuguese, the Dutch, the Danes, the French, the British, and then the French again. 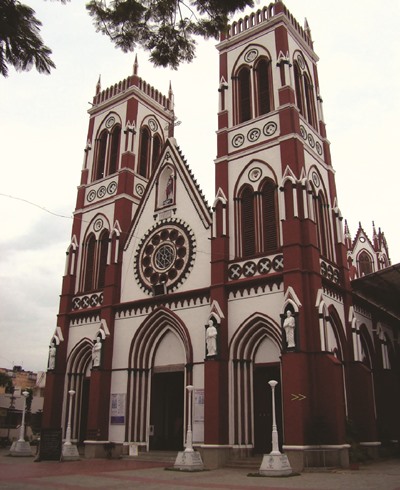 (Right) Basilica of the Sacred Heart of Jesus.

Not only its architecture, but also the plan of the old town is unique to India. Though the Dutch originally designed the town, they did not stay long enough to put their plan into operation. That was left to the French, soon after they established their settlement in 1674. To this day, France’s cultural influence remains pervasive, finding expression in street names, cuisine, and, of course, Pondy’s French speaking inhabitants. The aptly named French Quarter abounds with graceful 19th century mansions and monuments, private villas, stately government offices, French institutions, and many properties of the church and the Sri Aurobindo Ashram, all in their characteristic styles.

Arguably the nicest way to enjoy the town’s visual landmarks is to walk its neat, well-kept streets or hop into a cycle rickshaw for a leisurely ride. Along quiet roads and lanes, we are treated to a pleasing vision of ornate, wrought-iron gateways and high, sunlit walls embellished with profusions of bougainvillea. The use of vertical pilasters and horizontal cornices is a distinct French detail, along with arched windows with louvered wooden shutters. Wooden balconies over iron brackets are also a defining feature. 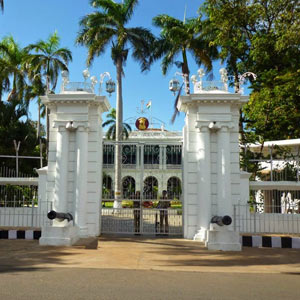 The center of the French Quarter is the Government Square built around the town’s largest green public space, the recently restored Bharathi Park that is modeled on French urban gardens. Surrounded by a cast-iron fence with four grand gateways, it is a vehicle-free zone open until ten at night. At its center is nestled the Aayi Mandapam (below), a monument to a courtesan built by a French king. When the sun goes down and the park is softly lit (the work of French light designer Noel Le Riche), there's an ambience of magic and romance that’s quite irresistible. 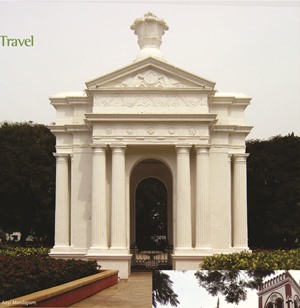 The Rue Dumas, parallel to the beachfront, is a treasure trove of visual delights. The imposing white structure of the Mairie or Hôtel de Ville is the first building that meets the eye. Once the town hall during the French administration, it is now Puducherry’s Municipal Office. 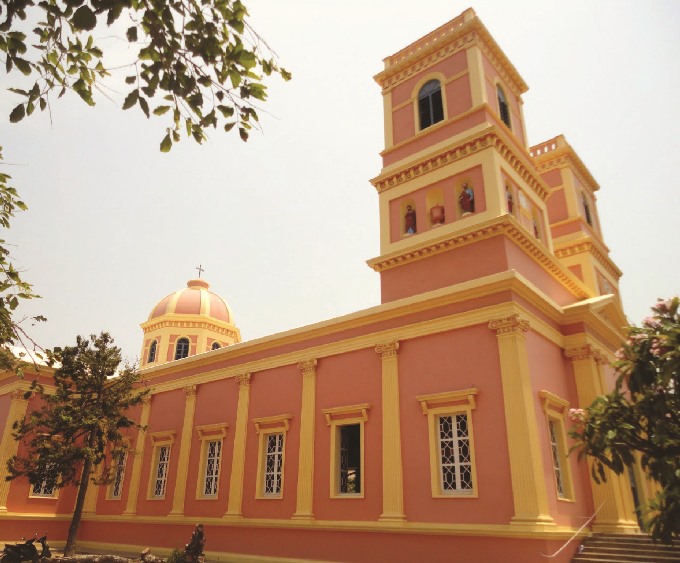 Église Notre Dame des Anges, or Our Lady of the Angels Church.

Further down the road is the Église Notre Dame des Anges or Our Lady of the Angels Church, a delightful pink and cream structure. Built in 1855, it is a sanctuary for peace where prayer with Sunday Mass is conducted in, you guessed it, French! Opposite the Église lies a forlorn garden that is easy to miss. There, dramatically silhouetted against the backdrop of the steel grey sea, is the statue of the young French warrior girl, Joan of Arc or Jeanne d’Arc. With will and idealism writ upon her stucco face, she holds one fist to her heart as the other plants down a flag.

The wide beachfront promenade is where Pondy’s citizenry congregate every evening to stroll, relax, and enjoy the warm sea breezes. Come dinner time, the town’s charming French and fusion cuisine restaurants beckon, where you can sit back on a flower-filled, candle-lit terrace with a glass of wine and imagine yourself to be in the south of France (for a fraction of the cost!).

Turning into the Rue du Bazaar Saint Laurent, towards the Romain Rolland junction is the famed Hôtel Lagrenée de Mézières (1774). Once a private home, this place has now become a workshop of the religious order of Saint Joseph De Cluny, employing local women artisans who turn out exquisite embroidery and home linen. 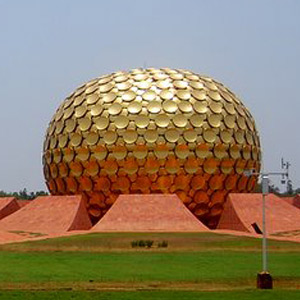 A little north (some 10 km) of Pondicherry is the verdant Auroville campus, dominated by the majestic, uniquely styled Matri Mandir. In the shape of a huge globe made up of golden discs, Matri Mandir has a white, marble-clad inner chamber for meditation. The sprawling complex also includes an amphitheatre, lake, and souvenir shop stocked with products manufactured by Auroville’s international community. Pondy is accessible, traveler-friendly, and culture-rich—what more could one ask for?