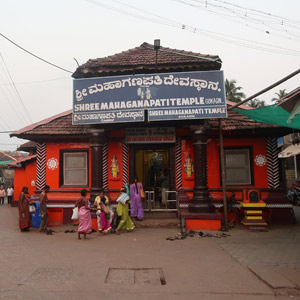 Explore small-town India’s delights in Gokarna and Sringeri, two sacred towns in the southern state of Karnataka. Nestled in the emerald beauty of the Western Ghats, these out-of-the-way places offer spectacular temple architecture, unspoiled natural beauty, and a culture infused with spirituality.

A visitor to India typically expects to take in some must-see monuments, bustling city life, a bit of shopping, and tongue-tingling Indian food. But look beyond the known and there’s a treasure chest of unforgettable experiences waiting to be discovered—what’s more, they’re hiding in plain sight!

One such gem is Gokarna in coastal Karnataka, nestling amid the lush vegetation of the Western Ghats. This tiny town is bound by water on three sides: the Arabian Sea on the west and the rivers Gangavali and Aghanashini to the north and south. It was probably the shape of the land between these bodies of water that gave Gokarna its name: “Cow’s Ear.”

A mere three hours away from here lies the state of Goa, internationally known for its eclectic blend of heritage and vibrant beach life, besides its reputation as India’s party capital. But Gokarna shares little in common with Goa other than its landscape of sun, sand, and beautiful beaches. Rooted in its regional culture, it’s all about slow charm and timeless spirituality.

Much of Gokarna goes to nap in the afternoon. Businesses are closed and roads are empty. Cows and dogs occupy the side roads. Front yards will see kids gathering to play games and chitchat. By late evening, life has begun to stir again, enlivening the spirits. A shaft of orange sunlight illuminates blue, red, and green-hued doors secured with diamond-shaped iron mesh. Women draped in colorful sarees sit in their front yards, conversing with neighbors. Then, it’s time for evening rituals. Flanked by temples and mutts (or maths, monasteries), the streets reverberate with chants of mantras, the lingering tones of temple bells, and the call of the conch trumpets. The fragrance of burning camphor and incense sticks lingers in the air as priests and disciples, clad in the traditional dhoti and sacred thread, can be seen reciting Sanskrit hymns around temples. 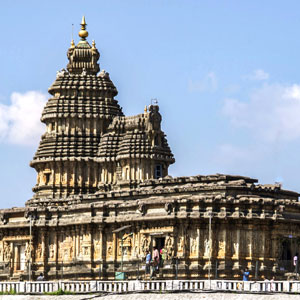 Since ancient times, Gokarna has been a humble village of fishermen and farmers, with a single distinction: its big, fourth century Mahabaleshwar temple, dedicated to the god Shiva. The temple, with its Dravidian style architecture, is believed to contain the soul of Shiva. It is considered as sacred as the famed Shiva temple at Varanasi (a.k.a. Kashi) in North India, which is why Gokarna is also known as the Dakshin Kashi (“Kashi of the South”). 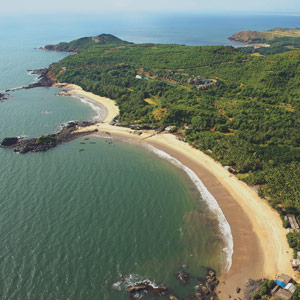 On a more corporeal note, Gokarna offers several other attractions, guaranteed to put you into a relaxed and happy frame of mind. Explore one beach after another, practice yoga on the sands, or simply sit and stare at the beautiful blue waters. Take a stroll through Gokarna’s streets; they’re much cleaner than most pilgrim towns across India. There are no beggars in the temples and no shouting, pestering hawkers en route. For a long time, this beach town was better known to foreign travelers than to most people across India. In the 1970s, it attracted no more than a few dozen visitors, with a handful of guesthouses offering accommodation. Most of them were from the emerging hippie movement, coming from as far as Paris and San Francisco. Gokarna has come some way since those days, offering more by way of comfortable, modern amenities while retaining its tranquility and spiritual ethos.

The beaches, Gokarna’s prime attraction, are in tune with the times, sporting names like Paradise, Half Moon, and Om. Decades ago, these were isolated stretches, accessible only to fishermen and hippies—less so today, with young vacationers and families frequenting them for short breaks from city life. 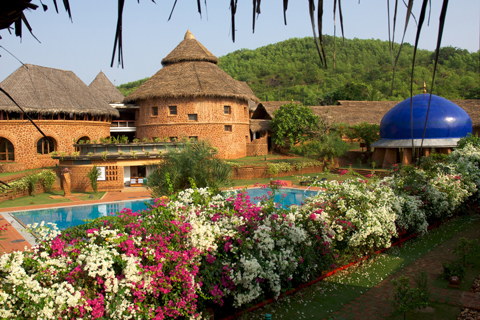 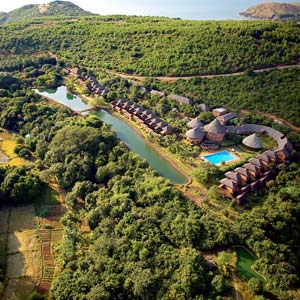 SwaSwara Wellness Retreat sits along the famed Kudle beach, an ideal retreat for stressed urbanites. “From its confused state of mind between spirituality and hippy culture, Gokarna’s breakaway time is now,” says SwaSwara’s manager, Mini Chandran, giving a strong cheer to the locals for their resilience and spiritual beliefs.

Inside the green swath of SwaSwara is a meditation hill with a panoramic view of the Arabian Sea and the red cliffs of Gokarna. All you need to do is sit down on the straw mats, drink in the beauty, and listen to the sound of faraway waves. “This is the perfect answer to slow down, get your inner self invigorated, and develop new friends at a relaxed pace. It’s all about the simplicity and purity of Gokarna,” Mini adds.

A walk to the beaches isn’t the expected stroll on soft sand. It’s more like a beach trek thanks to the rocky terrain. But push yourself a little and you’ll be rewarded with a piece of paradise at the end of the trek. Even better, you can pitch a tent on any of the beaches and wake up in the morning to the music of waves washing up on the seashore. Want to indulge in some stargazing? Lying on the sand and looking up at the inky night sky is pure nirvana. 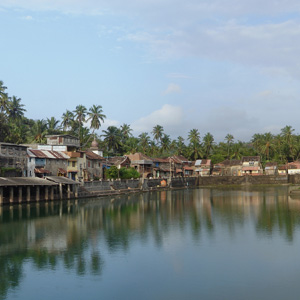 Savoring the local seafood is another must do. Gokarna is dotted with innumerable shacks that cater to the Indian palate as well as those who crave Western delights. Other than regular South Indian delicacies, unique dishes like seafood lasagna, and prawn pizza—served up on a banana leaf—can keep you energized and happy. Much like Goa, flea markets are a thing in Gokarna. Browse through handmade baskets, earthenware, eclectic cotton outfits, and cheaper gifts at the pop-up stalls lining the main street.

A temple town for some and a beach paradise for others, Gokarna is quite a study in contrasts. When you’ve savored the charms of this laid-back town, head out of Gokarna for quick day trips to the neighboring towns of Dandeli, Yana, and Murudeshwara. The green beauty and pure air of the Western Ghats come for free. 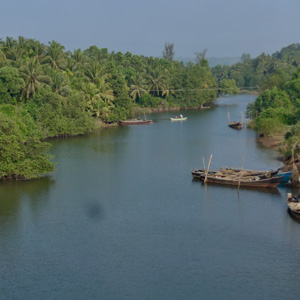 Sringeri! Along the banks of the Tunga River in the Western Ghats, lies this temple town that’s over 1,000 years old. Here, history, spiritual traditions, mythology, and diverse architectural styles come together in a graceful blend; it’s a cultural feast for the discerning traveler. 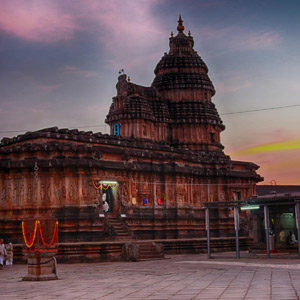 The fourteenth century Sri Vidyashankara Temple shows off the astronomical expertise of medieval South Indian temple builders. A fusion of architectural styles derived from various kingdoms and cultures—Hoysala, Chalukya, Vijayanagara, and Dravidian—the temple was built by the pontiff Sri Bharati Krishna Tirtha Acharya as a tribute to his guru, the tenth Acharya, Sri Vidyatirtha. The magnificent structure was built during the reign of the brothers Harihara and Bukka, the founders of the Vijayanagara empire. Standing on a richly sculptured basement, the main temple hall features 12 pillars designated for the 12 signs of the zodiac. Windows and doors along the temple walls are designed such that the rays of the equinox sunrise fall upon the deity in the sanctum sanctorum.

The Sharadamba Temple is dedicated to Saraswati, the goddess of learning and wisdom. Adi Shankara, the eighth century Hindu philosopher-theologian, installed a sandalwood image of Saraswati as Sharadamba in a simple shrine. It was replaced with its current copy in gold during the Vijayanagara era. The shrine was rebuilt in the 15th century and expanded in the early 20th century. But Sringeri is more than its temples; it is a center of theology with a seminary, a Sanskrit school, and a library of rare Sanskrit texts.

The main street has art galleries and several artisan shops to interest the curious visitor. Sringeri is encircled with evergreen vegetation; its residents, calm and spiritual in demeanor, possess exemplary knowledge of the innumerable plant species growing here. Many of these plants have rare medicinal properties and are used by locals for therapeutic purposes.

For the traveler who wants to explore more, there are a couple of nearby attractions. Uluve Bird Sanctuary, on the banks of the Tunga River, is a 5 km hop away from Sringeri. Drive over to marvel at the sight of hundreds of cranes and other water birds. 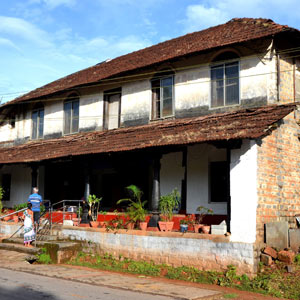 Agumbe is a tiny, scenic hill village in the Western Ghats. It would have remained in obscurity had it not been picked as the setting for the famous Indian TV serial of the 1990s, Malgudi Days. Malgudi—a fictitious town in writer R. K. Narayan’s novel of the same name—was inspired by Agumbe Village. It was here that Swami, the young protagonist of the novel, and his friends played in the dusty alleys and by the waters of the Sarayu River. Never heard of Malgudi? No matter. Chances are good that when you arrive at Agumbe, you’ll want to stay on forever in its idyllic environment. The village owes much of its dreamy landscape to the heavy rainfall it receives, making it the perfect terrain for scenic waterfalls, dense forests, and rivers. 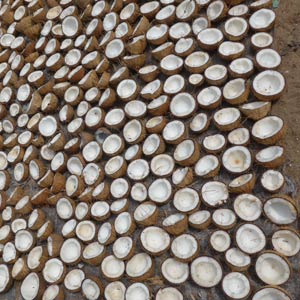 Gokarna and Sringeri: united by spirituality and geography, these two towns yet offer differing experiences to the traveler. Visit these lesser-known destinations to rekindle your spirit and for a taste of India’s regional flavors.

Bhaskar Krishnamurthy, an award-winning photojournalist, is the author of Balarama’s Story: An Elephant’s Journey (Peppertree Press), an illustrated children’s book. He co-produced Elephants in the Coffee, a documentary that won honors and wide acclaim. Based in Kansas when he’s not traveling, Krishnamurthy is involved in initiatives that help people in remote corners of India.