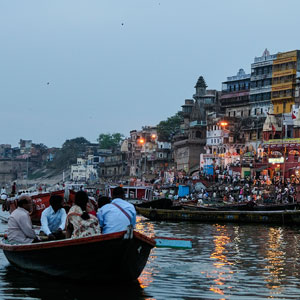 (Left) Evening at the ghats at Kashi.

From Mark Twain to Mirza Ghalib, from Satyajit Ray to Jean Renoir, many artistes have been moved to capture the city’s enduring essence. The crowded lanes, the timeless Ganga, and glimpses of life on the ghats make for a narrative that can never be forgotten, writes BHASKAR KRISHNAMURTHY (text and photos).

Just uttering one of its many names—Banaras…Varanasi… Kashi—can have the effect of taking one back in time. One of India’s most inspirational cities, Banaras has always attracted scholars, poets, music maestros, filmmakers, and graffiti artists. Kashi is the Eternal City, mentioned in the Rig Veda and the various puranas, and is one of the oldest cities to be continuously inhabited. If much of Saint Kabir Das’s work centered on Kashi, another great Indian poet, Mirza Ghalib, wrote Chirag-e-Dair (Temple Lamps) as an ode to the ancient city. Mark Twain shed light on its antiquity while Argentinian author Jorge Luis Borges wrote of Banaras’s rich landscape and industrious people. 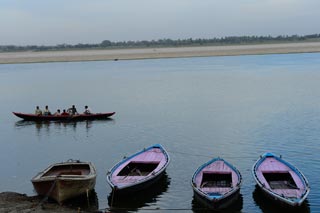 The Ganga and the ghats, the epicenter of the city.

Varanasi offers life in many forms through its storied history and an unending drama that is at times mystifying and always complex.

The origins of the name of the city itself are diverse. Drawing its most used name from the two rivers Varuna and Asi, Varanasi is known by many other names as well. The locals still call it Banaras, perhaps after the mythological King Benar. Kashi is the name with which Indians have identified the city since at least 1000 BC and was the name the Buddha knew the city by in 500 BC.

Just as the rest of India is changing, Varanasi, too, is witnessing a cosmetic shift while retaining its roots in spirituality and the religious ceremonies that attract visitors as never before. 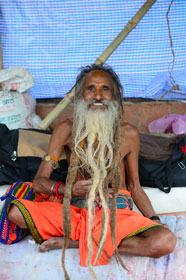 Sadhus (holy men), occupy the entire stretch of the ghats.

Multiplexes and a swanky new airport are recent fixtures of the city, some of whose architecture dates to the 2nd century. New architecture competes for attention next to historic temples, mosques, and ashrams that have stood for ages. Sadhus dot the ghats; many of these holy men have forgotten their origins but live here simply, overlooking the Ganges.

Parts of the city are far from hygienic. Other areas are hardly walkable. Yet, the city remains enigmatic, full of mystery and possibility, refusing to let itself be taken for granted. The sheer number of people visiting from across the world captivates one’s imagination and begs the question, “What is the real Varanasi?”

Whatever the intentions or aspirations of a visitor, he or she is likely to encounter ten things that make Varanasi a memorably mystical experience: 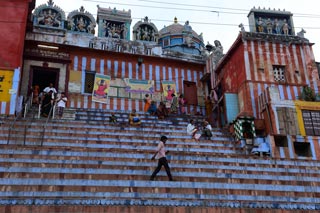 1. The Ganges and the ghats – The culture of Varanasi is closely associated with the Ganges, the epicenter of the Varanasi experience. At dawn each day, the ghats, roughly 8 km of temples, shrines, towering palaces and wide stone steps (leading to the water) awaken from a tranquil slumber and transform into a busy riverbank with the hustle and bustle of daily life. Life on the ghats is fascinating to watch, both from a distant boat and, more intimately, from walking directly into the melee. Spiritually enlightening and fantastically photogenic, the river, the ghats, and glimpses of life on the banks mingle to offer the visitor an experience unduplicated anywhere else in the world. 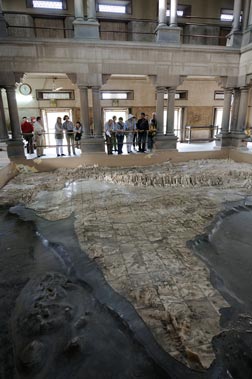 The relief map of India as Bharatmata, carved out of marble at the Bharat Mata Temple.

2. Kashi Vishwanatha Temple – Although there are perhaps hundreds of temples in Varanasi, one will see images of Shiva painted by folk artists across every wall. Yet, nothing can bring you as close to experiencing the power of Shiva as a personal visit to the temple. This is the world’s third-most-visited sacred site, with two gold-plated domes dating back to 1760. The temple is approached from the bathing ghats on the Ganges, through an insalubrious narrow lane. 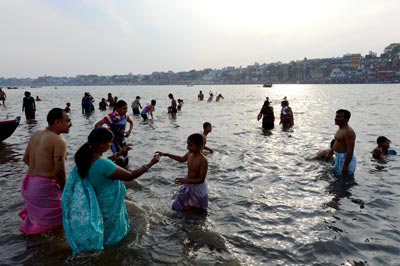 3. Varanasi from the Rooftops – Everyone walks to the river and on the ghats. Yet, watching life pass by every minute and observing life’s multilayered emotions, hues and colors from a vantage point along the ghats is an experience one should not miss. There are many hotels and restaurants that provide visitors with the most endearing sights of the city, as well as views of intense activities along the Ganga. 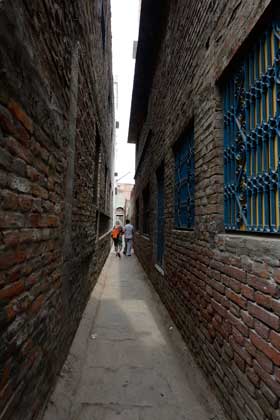 The classic galis (narrow lanes) of the city.

4. Walk the Galis – To gain insight into the history of the city and the lives of its inhabitants, wander the galis, narrow, labyrinthine lanes barely wide enough for two people to walk abreast. It is common to get lost in the Old Town, but don’t be afraid to explore the back streets. Every turn can give you interesting sights and opportunities to interact with residents. 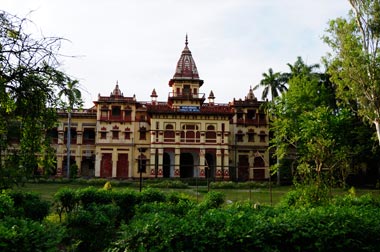 The classic Indo-Gothic architecture of the Banaras Hindu University—founded in 1916, by stalwarts Pandit Madan Mohan Malviya and Dr. Annie Besant.

5. Banaras Hindu University – One of the largest residential universities in the world, this is a verdant, peaceful, historic, and culturally rich destination. Magical, uncrowded, photogenic, and enriched with the quiet air of academia, BHU’s notable alumni include renowned scientists, scholars, poets, politicians, and artists. Inside the campus are the tallest Birla Mandir, as well as the Bharat Kala Bhavan, a museum showcasing India’s archaeological and artistic heritage. 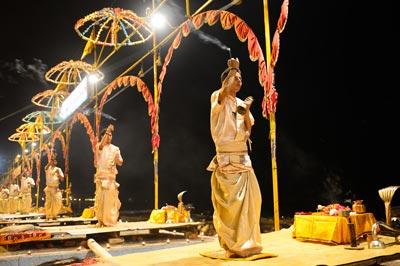 The Ganga aarti, a choreographed ceremony occurring every evening at the steps of Dasaswamedha ghat.

6. Aarti on Dasaswamedh Ghat – Among the 84 ghats along the Ganges, Dasaswamedh is one of the oldest and certainly the busiest ghat in Varanasi. For a half hour each evening, the “Ganga Aarti” worship, giving thanks to the divine River Ganga, takes place in the presence of devotees from around the world. Ganga Aarti is an enchanting, well-choreographed traditional ritual best observed from a boat or from the stone steps of the ghat.


The special characteristics of Banarasi silk work are Mughal inspired designs such as intricate intertwining floral and foliate motifs, kalga and bel, a string of upright leaves called jhallar at the outer edge.

7. Benarsi Silk and Benarsi paan – Coveted by every Indian bride, the Benarsi sari has remained an integral symbol of Varanasi. The city’s rich heritage of weaving has kept its elegant craft of silk brocades and saris in high demand for generations. Legend has it that the great Kabir himself was a weaver. Today, weaving is a dying craft due to shortages of skilled labor, but the predominantly Muslim weavers of Varanasi are still masters of the art. 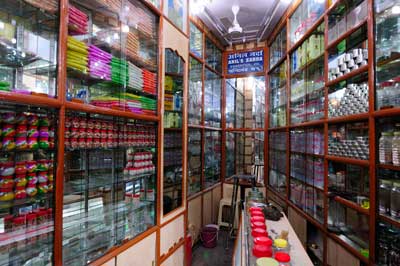 A one-stop shop for the ingredients of the famous Banarasi paan.

Benarsi paan is a great way to end a hearty meal, providing a mildly intoxicating mix of betel nut, lime, tobacco, and tree resin. Across Varanasi it is chewed with relish. The evidence is hard to miss: the walls of many buildings and street corners sport crimson stains from paans spat out by chewers.

8. Krishnamurti Study Centre and Retreat – On the edge of the city, a verdant place of spiritual learning attracts thousands of people from around the world. The facility has a free library containing an amazing collection of books and videos, where a visitor may learn about one of the 20th century’s greatest spiritual teachers—Jiddu Krishnamurti. 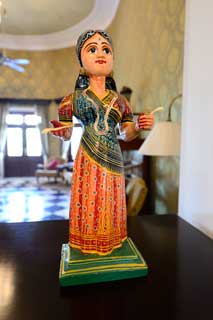 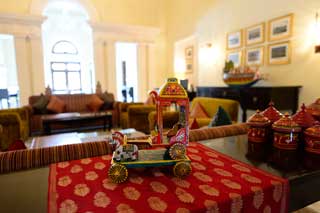 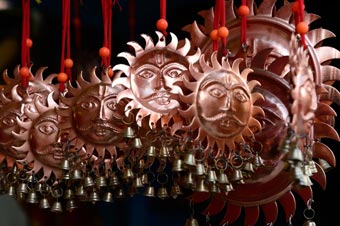 9. Dinner at Nadesar Palace – The Nadesar Palace Hotel converted from a Maharajah’s palace oozes colonial charm. Its 10-room suites are each named after prominent guests that the Maharajah has hosted. Mingle with monarchs and diplomats as you dine poolside under the stars while surrounded by lush gardens in a place faraway from the chaos of Varanasi. Sample the specialty satvik menu that boasts jackfruit kofta curries, an incredibly good poori stuffed with green peas, an in-season pumpkin curry or a plain yellow dal—vegetarian food at its finest.

If you choose to stay there, don’t miss the experience of Jiva Spa, which offers the traditional cleansing ritual of abhisheka, a massage that includes being anointed with Ganges water mixed with milk and honey, all accompanied by Vedic chants. 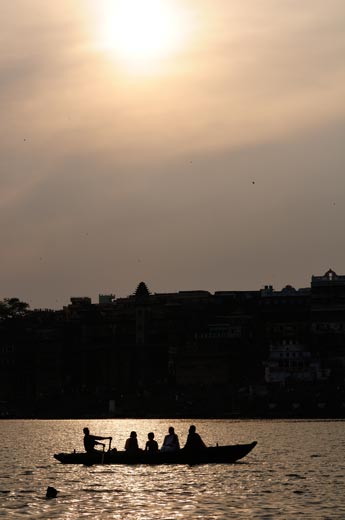 10. Banaras Gharana – Classical music echoes through the galis, ghats, and guesthouses of Varanasi. After all, this is the land where Pandit Ravi Shankar was born and Ustad Bismillah Khan spent his life. From dawn to dusk, visitors hear the sounds of the sarangi, tabla, shehnai, tanpura, sitar, sarod, santoor, and flute. The classical Banaras Gharana provides a glimpse of the divine setting of the age-old Indian tradition of guru-shisya parampara. It is believed that in Varanasi, everyone understands the importance and beauty of music, and its numerous lanes provide the ideal place for a concert.